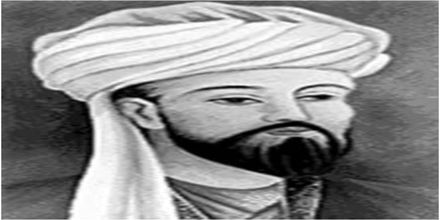 Abu Hayyan Al-Tawhidi was an Arabic litterateur and philosopher, probably of Persian origin, and author of numerous books which reflect all the main themes of debate and reflection in the cultivated circles of his time.

Al-Tawhidi’s main philosophical work is al-Muqabasat (Borrowed Lights). Al-Imta’ wa’-mu’anasa also contains some philosophical material, besides some which is predominantly literary or grammatical. In metaphysics, he follows the basic Neoplatonic scheme of emanation (see Neoplatonism in Islamic philosophy). The First, frequently called the Creator, is the source of the world of nature which emanates continuously from him; God is thus also characterized by his generosity. Intellect, Soul and Nature are the three main levels of being, or hypostases, emanating from the First. The process is sometimes expressed in terms of illumination; the Intellect receives its light from the First, the Soul from the Intellect and Nature from the Soul. Elsewhere, the soul is considered as being pure light. Conversely, the First is said to encompass the Intellect, which in turn encompasses the Soul and so forth.

Many paragraphs are devoted to the human soul, concerning which al-Tawhidi takes up positions that can be defined as Platonic. The soul subsists by itself and is not tied down to the body; on the contrary, it uses the body as an instrument. The soul does not arise from the mixture of the elements; thus the Galenic theory is implicitly rejected, although it is ascribed in one passage to Zeno (probably meaning the Stoic). The union with the body is described as a kind of fall in a way which has clear antecedents in some soteriological conceptions of Gnosticism and Neoplatonism. In the course of the soul’s descent from the heavenly realm it became covered in scales or veils, which it will cast off after physical death, that is, when it relinquishes the body. The soul becomes like a rusty mirror; just as the latter is no longer capable of reflecting external objects, the soul forgot what it knew in the intelligible world. Its true nature is also more fully active in sleep. In our ordinary waking life, we do not remember the world where our soul originated because we have been overcome by matter. These two states of the soul, incarnate and immaterial, correspond to the two realms of intellection and sense-perception. Intellection is an immediate form of apprehension, devoid of reflection and deliberation, whereas sense-perception is linked to discursive and inductive modes of thought, such as syllogism.

According to Franz Rosenthal, despite the strong prohibition of self-killing in Islamic thought, this passage in al-Tawhidi’s work shows that the idea of suicide was justified to some thinkers in 10th-century Arabia. It is the only such detailed discussion of suicide that has been preserved in the extant Arabic literature.

Humanity is thus in an intermediate position between the world of intellect and the world of nature. The latter is integrated into the emanationist scheme more neatly than is the case in Greek Neoplatonism; nature is a life force which emanates from the First Principle and penetrates all bodies, giving them their forms and linking them together. The Aristotelian definition of nature as principle of motion and rest is also quoted more than once.

Abu Hayyan Al-Tawhidi evinces a keen interest in linguistic questions. He predictably maintains the superiority of Arabic over other languages, but also discusses such topics as the respective place and function of prose and verse (see Aesthetics in Islamic philosophy). It is thanks to him that we have a report of the controversy between the partisans of logic and Greek culture and those of traditional Arabic grammar. Another discussion tackles the sensitive problem of the relationship between philosophy and religion. Among the current themes of his time, that of the characters and respective merits of the nations is taken up on several occasions. In the field of ethics, he devoted an entire epistle to friendship, and this is one of his more personal and interesting works.

There are differing views on the dates of al-Tawhidi’s birth and death, and his origins. According to Tarikh-i Sistan, he was born in 923 Near Baghdad or Fars, and died in 1023 in Shiraz. Al-Tawhidi had a difficult childhood. He was born into a poor family that sold dates called Tawhid (hence his surname), and spent much of his childhood as an orphan in the care of his uncle, who treated him poorly.

In spite of the incident of burning his books collectively (which was symbolic of course) by himself, he has left a set of literary, philosophical, and Sufi works, which were distinctive in the history of the Arabic literature. Perhaps the most important works are: