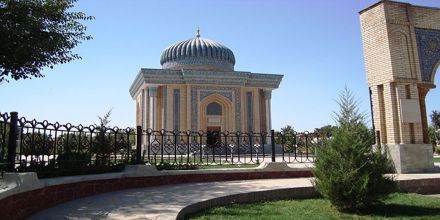 Imam Abu Mansur Maturidi; full name: Abu Mansur Muhammad ibn Muhammad ibn Mahmud Al Maturidi (rahimahullah) was a Hanafi scholar from Maturid, a place in Samarqand. He was one of the two foremost Imams in ‘Aqidah (beliefs). He was known to be an Imam of guidance and the one who corrected the ‘Aqidah of the Muslims. He had authored several books on this important topic, as well as many rebuttals against the deviant groups of his time. He was the student of Imam Abu Bakr Ahmad Al Juzajani (rahimahullah).

He was born in Maturid near Samarkand, (possibly) in 853. He was educated in Islamic theology, Qur’anic exegesis, and Islamic jurisprudence. The area of Samarkand was at his time under the Samanid and its urban population were predominantly Tajik while the surrounding steppes was largely populated by Turkic-speaking people.

His Teachers were Abu Nasr Ahmed b. Abbas b. Husayin al-Iyazi, Abu Bakr Ahmed b. Ishak b. Salih el-Juzjani (writer from Al-Farq wat Tamyiz),Nusayr b. Yahya al-Balkhi and Qadilqudat Muhammad b. Mukatil ar-Razi. Abu Nasr al-Iyazi was his teacher and friend. Abu Bakr al-Juzjani was the pupil of Abu Sulayman Musa b. Sulayman el-Juzjani, who was the pupil of Imam Abu Yusuf and Imam Muhammad Ash-Shaybani. Muhammad b. Mukatil did learn from Imam Muhammad as-Shaybani too

Abu Mansur Muhammad b. Muhammad al‑Maturidi, al‑Hanafi, was born at Maturid, a village or quarter in the neighbourhood of Samarqand, one of the great cities of Central Asia. According to some writers, he came of the renowned family of abu Ayyub al‑Ansari of Madinah.

This statement is also corroborated by the fact that some other Arab families of Madinah also settled in Samarqand and that al‑Maturidi’s daughter was married to al‑Hasan al‑Ash’ari, the father of Imam abu al‑Hasan `Ali al­ Ash’ari and a descendant of abu Ayyub al Ansari of Madinah.

Almost all the biographers who give only short sketches of al‑Maturidi’s life in their worksb agree that he died in the year 333/944, but none of them mentions the date of his birth. One of the teachers of al‑Maturidi, namely, Muhammad b. Muqatil al‑Razi is stated to have died in 248/862, which proves that al‑Maturidi was born before that year and possibly about the year 238/853. According to this assumption, al‑Maturidi was born during the reign of the ‘Abbasid Caliph al‑Mutawakkil who combated the Mu’tazilite doctrines and supported the traditional faith.

Al‑Maturidi flourished under the powerful rule of the Samanids, who ruled practically the whole of Persia from 261/874 to 389/999 actively patronized science and literature, and gathered around their Court as number of renowned scholars. He was brought up in the peaceful academic atmosphere and cultural environment of his native land and received good education in different Islamic sciences under four eminent scholars of his time: Shaikh abu Bakr Ahmad b. Ishaq, abu Nasr Ahmad b. al‑`Abbas known as al‑Faqih al‑Samar­qandi, Nusair b. Yahya al‑Balkhi (d. 268/881), and Muhammad b. Muqatil al‑Razi (d. 248,/862), Qadi of Rayy. All of them were students of Imam abu Hanifah (d. 150/767).

In recognition of his scholarship and profound knowledge in theology (and his invaluable services to the cause of ahl al‑sunnah w‑al‑jama’ah) people conferred on him the title of Imam al‑Huda and Imam al‑Mutakallimin. Mahmud al‑Kufawi mentioned him as “leader of guidance, the model of the Sunnite and the guided, the bearer of the standard of ahl al‑sunnah w‑al ­jama’ah, the uprooter of misguidance arising from disorder and heresies, leader of the scholastics, and rectifier of the faith of the Muslims.

Maturidi had immense knowledge of dualist beliefs (Sanawiyya) and of other old Persian religions. His “Kitäb al-tawhld” in this way has become a primary source for modern researchers with its rich materials about Iranian Manicheanism (Mâniyya), a group of Brahmans (Barähima), and some controversial personalities such as Ibn al-Rawandi, Abu Isa al-Warraq, and Muhammad b. Shabib.

Works ‑ Al‑Maturidi wrote a number of important books on Tafsir, Kalam, and Usul, a list of which is given below: