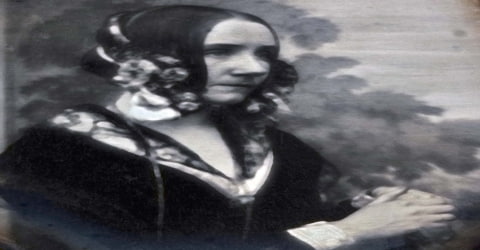 Famous For: Considered to be the world’s first computer programmer Lovelace was the only legitimate child of the poet Lord Byron and his wife Anne Isabella “Annabella” Milbanke, Lady Wentworth. All of Byron’s other children were born out of wedlock to other women. Byron separated from his wife a month after Ada was born and left England forever four months later. He commemorated the parting in a poem that begins, “Is thy face like thy mother’s my fair child! ADA! sole daughter of my house and heart?”. He died of disease in the Greek War of Independence when Ada was eight years old. Her mother remained bitter and promoted Ada’s interest in mathematics and logic in an effort to prevent her from developing her father’s perceived insanity. Despite this, Ada remained interested in Byron and was, upon her eventual death, buried next to him at her request. She was often ill in her childhood. Ada married William King in 1835. King was made Earl of Lovelace in 1838, and Ada in turn became Countess of Lovelace.

Ada’s mother has highly educated herself, and she was determined that her daughter would be also. She hired numerous accomplished tutors and teachers for young Ada and made a special effort to have her taught mathematics, which was a subject not usually taught to girls during the 1800’s! Partly, this was because she did not want her daughter to inherit the imaginative and moody temperament of her former husband, Lord Byron. She vowed that Ada would grow up to be more logical and rational than her father, and she thought learning mathematics would help achieve this goal.

Her educational and social exploits brought her into contact with scientists such as Andrew Crosse, Sir David Brewster, Charles Wheatstone, Michael Faraday and the author Charles Dickens, contacts which she used to further her education. Ada described her approach as “poetical science” and herself as an “Analyst (& Metaphysician)”.

When she was a teenager, her mathematical talents led her to a long working relationship and friendship with fellow British mathematician Charles Babbage, also known as “the father of computers”, and in particular, Babbage’s work on the Analytical Engine. Lovelace first met him in June 1833, through their mutual friend, and her private tutor, Mary Somerville.

Lovelace became interested in Babbage’s machines as early as 1833 and, most notably, in 1843 came to translate and annotate an article written by the Italian mathematician and engineer Luigi Federico Menabrea, “Notions sur la machine analytique de Charles Babbage” (1842; “Elements of Charles Babbage’s Analytical Machine”). Her detailed and elaborate annotations (especially her description of how the proposed Analytical Engine could be programmed to compute Bernoulli numbers) were excellent; “the Analytical Engine,” she said, “weaves algebraic patterns, just as the Jacquard-loom weaves flowers and leaves.”

In the 1840s Ada flirted with scandals: first, from a relaxed relationship with men who were not her husband, which led to rumours of affairsand secondly, her love of gambling. She apparently lost more than £3,000 on the horses during the later 1840s. The gambling led to her forming a syndicate with male friends, and an ambitious attempt in 1851 to create a mathematical model for successful large bets. This went disastrously wrong, leaving her thousands of pounds in debt to the syndicate, forcing her to admit it all to her husband. She had a shadowy relationship with Andrew Crosse’s son John from 1844 onwards. John Crosse destroyed most of their correspondence after her death as part of a legal agreement. She bequeathed him the only heirlooms her father had personally left to her. During her final illness, she would panic at the idea of the younger Crosse being kept from visiting her. In 1815, the famous Romantic poet Lord Byron met a woman named Anne Isabella Milbanke, and they decided to get married. Near the end of that year, Anne gave birth to a baby girl named Ada (Born 10 December 1815). The relationship would be very short lived. Her parents, Annabella Milbanke Byron and Lord Byron, separated briefly after her birth and although her father was allowed by the English law to get full custody of Ada, he gave up his parental rights (he did ask his sister to inform him about his daughter’s welfare, however). Annabella moved in with one-month-old Ada to Kirkby Mallory, Leicestershire.

Ada’s mother has highly educated herself, and she was determined that her daughter would be also. She hired numerous accomplished tutors and teachers for young Ada and made a special effort to have her taught mathematics, which was a subject not usually taught to girls during the 1800’s! Partly, this was because she did not want her daughter to inherit the imaginative and moody temperament of her former husband, Lord Byron. She vowed that Ada would grow up to be more logical and rational than her father, and she thought learning mathematics would help achieve this goal.

Ada was encouraged by her mother to study logic and mathematics, disciplines which she believed were able to counteract the poetical tendencies that she might have inherited from her father and which Annabella considered “insanity.” Her professor of mathematics at the University of London was Augustus de Morgan, who helped her career a great deal.

In early 1833, Ada had an affair with a tutor. After being caught, she tried to elope with him but the tutor’s relatives recognized her and contacted her mother. Annabella and her friends covered the incident up to prevent a public scandal. Ada never met her younger half-sister, Allegra, the daughter of Lord Byron and Claire Clairmont. Allegra died in 1822 at the age of five. Ada did have some contact with Elizabeth Medora Leigh, the daughter of Byron’s half-sister Augusta Leigh, who purposely avoided Ada as much as possible when introduced at Court. On July 8, 1835, she married William King, 8th Baron King, and, when he has created an earl in 1838, she became Countess of Lovelace. They had three homes: Ockham Park, Surrey; a Scottish estate on Loch Torridon in Ross-shire; and a house in London. They spent their honeymoon at Worthy Manor in Ashley Combe near Porlock Weir, Somerset. Lovelace’s work opposite British mathematician Charles Babbage, who was also a professor at Cambridge and her lifelong friend, was the most significant part of her career. Between 1842 and 1843, she translated works from French and annotated a memoir written by Italian mathematician Luigi Menabrea, who supported Babbage’s Analytical Engine.

In 1844 she commented to a friend Woronzow Greig about her desire to create a mathematical model for how the brain gives rise to thoughts and nerves to feelings (“a calculus of the nervous system”). She never achieved this, however. In part, her interest in the brain came from a long-running pre-occupation, inherited from her mother, about her ‘potential’ madness. As part of her research into this project, she visited the electrical engineer Andrew Crosse in 1844 to learn how to carry out electrical experiments. In the same year, she wrote a review of a paper by Baron Karl von Reichenbach, Researches on Magnetism, but this was not published and does not appear to have progressed past the first draft. In 1851, the year before her cancer struck, she wrote to her mother mentioning “certain productions” she was working on regarding the relation of maths and music.

Lovelace became interested in Babbage’s machines as early as 1833 and, most notably, in 1843 came to translate and annotate an article written by the Italian mathematician and engineer Luigi Federico Menabrea, “Notions sur la machine analytique de Charles Babbage” (1842; “Elements of Charles Babbage’s Analytical Machine”). Her detailed and elaborate annotations (especially her description of how the proposed Analytical Engine could be programmed to compute Bernoulli numbers) were excellent; “the Analytical Engine,” she said, “weaves algebraic patterns, just as the Jacquard-loom weaves flowers and leaves.”

During a nine-month period in 1842–43, Lovelace translated the Italian mathematician Luigi Menabrea’s article on Babbage’s newest proposed machine, the Analytical Engine. With the article, she appended a set of notes. Explaining the Analytical Engine’s function was a difficult task, as even many other scientists did not really grasp the concept and the British establishment was uninterested in it. Lovelace’s notes even had to explain how the Analytical Engine differed from the original Difference Engine. Her work was well received at the time; the scientist Michael Faraday described himself as a supporter of her writing.

Section G also contains Lovelace’s dismissal of artificial intelligence. She wrote that “The Analytical Engine has no pretensions whatever to originate anything. It can do whatever we know how to order it to perform. It can follow analysis, but it has no power of anticipating any analytical relations or truths.” This objection has been the subject of much debate and rebuttal, for example by Alan Turing in his paper “Computing Machinery and Intelligence”.

In 1840, Babbage was invited to give a seminar at the University of Turin about his Analytical Engine. Luigi Menabrea, a young Italian engineer and the future Prime Minister of Italy, transcribed Babbage’s lecture into French, and this transcript was subsequently published in the Bibliothèque Universelle de Genève in October 1842. Babbage’s friend Charles Wheatstone commissioned Ada Lovelace to translate Menabrea’s paper into English.

Ada Lovelace’s notes were labeled alphabetically from A to G. In note G, she describes an algorithm for the Analytical Engine to compute Bernoulli numbers. It is considered the first published algorithm ever specifically tailored for implementation on a computer, and Ada Lovelace has often been cited as the first computer programmer for this reason. The engine was never completed so her program was never tested.

In 1953, more than a century after her death, Ada Lovelace’s notes on Babbage’s Analytical Engine were republished as an appendix to B.V. Bowden’s Faster than Thought: A Symposium on Digital Computing Machines. The engine has now been recognized as an early model for a computer and her notes as a description of a computer and software.

Babbage only built a small part of the Analytical Engine, but Lovelace’s efforts have been remembered. The early programming language Ada was named for her, and the second Tuesday in October has become Ada Lovelace Day, on which the contributions of women to science, technology, engineering, and mathematics are honored. Lovelace has been portrayed in Romulus Linney’s 1977 play Childe Byron, the 1990 steampunk novel The Difference Engine by William Gibson and Bruce Sterling, the 1997 film Conceiving Ada, and in John Crowley’s 2005 novel Lord Byron’s Novel: The Evening Land, where she is featured as an unseen character whose personality is forcefully depicted in her annotations and anti-heroic efforts to archive her father’s lost novel.

In 2017, a Google Doodle honored her on International Women’s Day. Lovelace and Babbage appear as characters in the ITV series Victoria.

In 2018, Lady Lovelace appears as a character in the second season of the PBS Masterpiece series Victoria, played by Emerald Fennell.

In July 2018 a rare copy of Ada Lovelace’s Notes was sold at auction to an anonymous buyer. According to the auction house Moore Allen & Innocent, this is one of six known copies of her original publication. The copy of the Notes sold for £95,000.

Ada Lovelace passed away on November 27, 1852, at 36 years old, due to uterine cancer complicated by excessive bloodletting (at her doctor’s advice). At her request, she was buried next to her father, whom she had never met, in Hucknall, Nottingham, at the Church of St. Mary Magdalene.