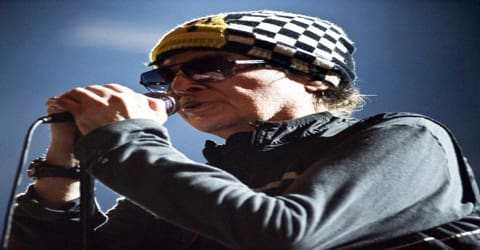 An American sculptor, singer, songwriter and photographer, Alan Vega was born on June 23, 1938, in a Jewish family, in Brooklyn, New York City, New York, the U.S. He began his career as a visual artist, gaining notoriety for his “light sculptures”; eventually Vega opened his own lower Manhattan gallery space, which he dubbed the Project of Living Artists. The Project served as a stomping grounds for the likes of the New York Dolls, Television, and Blondie as well as the 15-piece jazz group Reverend B., which featured a musician named Martin Rev on electric piano. Soon, Vega and Rev formed Suicide, whose minimalist, aggressive music a fusion of Rev’s ominous, repetitive keyboards and Vega’s rockabilly snarl helped paved the direction for the electronic artists of the future.

Using inarticulate objects such as neon lights and differently shaped lights, Alan Vega created unconventional sculptures which convey a radical message. One of his works, which was displayed at the ‘Museum of Contemporary Art’ in Lyon, depicted a cross with faces of Jesus and Muhammad Ali co-existing. His tryst with electro-punk began while he was still messing around with electronic art, and had a chance to attend the ‘Stooges’ concert. Pairing up with his buddy Martin Reverby, who plays the keyboard for their band ‘Suicide’, this musician went on to pave the path for the future of electro-punk music. The ‘Rockabilly style’, which was regarded as Alan’s trademark, coupled with Martin Reverby’s repetitive keyboard notes, established the duo as the pioneers of a new genre in electro-punk.

Over the years, Alan also went on to explore new musical possibilities with his solo renditions, thus, carving a niche for himself. Having a keen sense of photography, he also went on to publish one of the collections of his photographic works coupled with poetry. He also penned a collection of his poetic works. Alan Vega, by name of Boruch Alan Bermowitz, was born in a Jewish family, in the city of Brooklyn on 23rd June 1938. Two 2009 articles confirmed his 1938 birth date, one in Le Monde about the Lyon exhibit and one in the magazine Rolling Stone. Vega also long claimed to be Catholic due to his mother’s Puerto Rican ancestry. Although themes of Catholicism were important to his lyrics and visual art over the years, in a 2008 interview with The Jewish Chronicle he admitted he lied about his own religious upbringing to “fuel the myth”.

In the mid-1960s, Vega attended Brooklyn College where he studied both physics and fine art under Ad Reinhardt and Kurt Seligmann and graduated in 1967. In the 1960s, he became involved with the Art Workers’ Coalition, a radical artists group that harassed museums and once barricaded the Museum of Modern Art. In 1969, funding from the New York State Council on the Arts made possible the founding of MUSEUM: A Project of Living Artists an artist-run 24-hour multimedia gallery at 729 Broadway in Manhattan. Calling himself Alan Suicide, he graduated from painting to light sculptures, many of which were constructed of electronic debris. He gained a residency at the OK Harris Gallery in SoHo where he continued to exhibit until 1975. Barbara Gladstone continued to show his work well into the 1980s. During the phase prior to the inception of ‘Deuce Avenue’, Alan Vega met Elizabeth Lamere whom he later married. The couple has a son, Dante Bermowitz.

The singer (Alan Vega) nick-named himself ‘Alan Suicide’ while he was a student of Fine Arts at the Brooklyn College.

On Vega’s religious views, he was raised in the Jewish faith but declared himself to be Catholic for many years due to his mother’s upbringing. When asked about God he stated, “I distrust the name ‘God’ but, yes, I do believe in a higher power, God is in all of us,” he says, before deciding: “There is an immense power. There has to be.” He also shared the views of Spinoza, the pantheist philosopher. In 1966, Alan Vega met and befriended Martin Reverby. Together, the two began experimenting with music and formed the band Suicide along with guitarist Paul Liebgott. The group played twice at MUSEUM before moving on to the OK Harris Gallery. Calling himself “Nasty Cut”, he used the terms “Punk Music” and “Punk Music Mass” in flyers to describe their music, which he adopted from an article by Lester Bangs.

A fine arts graduate, Alan started his career in the early 1970s as a visual artist and sculpted objects from electronic debris. His sculptures were on display at the ‘Projects of Living Artists’ in Soho, New York, which was founded by the ‘AWC’. Impressed by the performance of the Proto-punk band ‘Iggy and the Stooges’, this vocalist came up with his own band named ‘Suicide’, along with instrumentalist Martin Reverby in 1970. The band’s unconventional style of music went on to become an inspiration for future generations of electronic artists all over the world. The band in their initial days used to stage performances at the ‘OK Harris gallery’, but later they started playing at a venue called ‘Projects of Living Artists’.

In 1971 the group dropped Paul Liebgott and added Mari Reverby on drums, though she didn’t play in their live performances. With Bermowitz finally settling on Alan Suicide as a working name, they began to play music venues. Suicide went on to perform at the Mercer Arts Center, Max’s Kansas City, CBGB and ultimately, achieve international recognition.

The first Suicide album (called Suicide) did not appear until 1977, and it set a template for their future progress by being critically acclaimed and hugely influential while failing to make an impact on the charts. Recorded in four days and utilizing raw electronic keyboards, a migraine-evoking drum sound and dub and echo effects behind Vega’s howling and crooning vocals, it contained what would become several of Suicide’s most enduring pieces, including Johnny (their first single), Ghost Rider, Cheree and the 10-minute Frankie Teardrop. Suicide disbanded in 1980, and both Vega and Rev undertook solo careers. Vega’s self-titled 1980 debut (including the hit single “Jukebox Babe”) and his 1981 effort Collision Drive continued to explore the fractured rockabilly identity he had established in his earlier work. Saturn Strip, produced by longtime fan Ric Ocasek and released in 1983, marked Vega’s debut for Elektra Records; corporate relations soured during production for 1985’s Just a Million Dreams, however, and at one point the label even attempted to remove the singer from his own studio sessions. Suicide briefly re-formed in 1988, resulting in their third album, A Way of Life.

The legacy of Alan’s signature ‘Rockabilly’ style continued with his 1981 release, ‘Collision Drive’. His works, consisting of ‘minimal music’ coupled with repetitive notes, were greatly influenced by the style of his teacher, Ad Reinhardt. Having established himself as a painter, Vega went on to become a visual artist and exhibited his works at the ‘Ok Harris’ gallery, where he had obtained his residency. The gallery displayed his exhibit from 1972 to 1975. Vega exhibited his works of art at the ‘PS1 Art Institute’, located in Long Island City of New York in 1982. The album ‘Saturn Strip’ was released in 1983 by the label ‘Elektra Records’, and was produced by Vega’s old-time pal Rick Ocasek. The album garnered appreciation from critics across the continent.

In 1985, Vega released the more commercially viable ‘Just a Million Dreams’, but was dropped from his record label after its release. The album originally was set to be produced by Ric Ocasek as a follow-up to the critically acclaimed Saturn Strip (1983), but production switched over to Chris Lord-Alge and Vega ran into several difficulties during the recording sessions. The album eschewed many of Vega’s experimental traits in favor of power pop songs and he later lamented, “They took all my songs and turned them into God knows what.”

The third album of the band ‘Suicide’, titled ‘A Way of Life’ was released in 1988, in collaboration with Rick Ocasek. The release of the album was followed by a European tour. The band released their fourth album named ‘Why Be Blue’ in 1990. A music video for the song ‘Dominic Christ’, which featured in this album, was produced by Stefan Roloff and brought out to the public by ‘Wax Trax Records’.

At the turn of the decade, Vega also began exploring new media outlets: Deuce Avenue War/The Warriors v3 97, his first book of photography, appeared in 1990, while Cripple Nation, a collection of prose and lyrics, bowed in 1991. Later that year, another one of his works, titled ‘Cripple Nation’, a collection of prose, poetry and lyrics was published by Henry Rollins. After the release of Vega’s solo albums Deuce Avenue (1990) and Power on to Zero Hour (1991), Suicide again reunited and toured. In 1995, Vega resurfaced as a solo artist with New Raceion; a year later, he returned with Dujang Prang. Cubist Blues (with Alex Chilton and Ben Vaughn) appeared in 1996, as did Getchertikitz with Ocasek and Gillian McCain. This vocalist collaborated with various artists like Mika Vainio and Ilpo Vaisanen, who were together known as ‘PanSonic’, and together they released the album ‘Endless’, undersigned ‘VVV’ in 1998. He also composed the music for the movie ‘Sombre’, which was directed by Phillipe Grandrieux.

In 1999, Vega released his next album, a composition mirroring his personal experience and opinions, named ‘2007’, which didn’t receive much appreciation. Shortly after the September 2001 debacle, ‘Suicide’ released their next album titled ‘American Supreme’, resonating the sentiments of the public.

Suicide re-formed yet again in the early 2000s (yielding 2002’s American Supreme), and a second Vainio Väisänen Vega album, 2005’s Resurrection River, appeared on Mego. In 2007, Vega released the solo album Station on Blast First Records. The album reflects his classic style, and evolution through the years. He then collaborated with Marc Hurtado (one half of Étant Donnés), producing the 2010 full-length Sniper.

In January 2002, Vega came up with an art exhibition at a gallery named ‘Deitch Projects’, organized at the behest of renowned art dealer Jeffrey Deitch. The exhibition comprised of his trademark floor sculptures, and wall pieces carved out of electronic debris. In 2003, this musician sang two songs which featured in DJ Hell’s Cd, titled ‘NY Muscle’. Working in alliance with musicians Vainio and Vaisanen yet again, Vega came out with the album ‘Resurrection River’ which was released in 2004.

At the ‘Deitch Projects’ in 2009, two short documentaries filmed on Alan Vega and his works were screened. One was ‘Autour d’Alan Vega (extraits) (1998)’, filmed by Hugues Peyret, and the other one was ‘Alan Vega (2000)’ documented by Christian Eudeline. In 2012, Vega suffered a stroke. That and problems with his knees led him to focus on less physically demanding art, such as painting, rather than music. He continued to live in downtown New York City. In 2016, Vega made a small return to music by contributing vocals to the song “Tangerine” on French pop veteran singer Christophe’s album Les Vestiges du chaos. In 2017, Alan Vega’s final album “IT” was released posthumously on July 14 on Fader. The album was produced by Alan Vega, Liz Lamere, Perkin Barnes and Jared Artaud of New York City band The Vacant Lots. The album cover and inner sleeves featured Vega’s original artwork. Two posthumous art shows “Dream Baby Dream” at Deitch Gallery and “Keep IT Alive” at Invisible-Exports exhibited Alan Vega’s work in New York City. Alan Vega died in his sleep on July 16, 2016, at the age of 78. His death was announced by musician and radio host Henry Rollins, who shared an official statement from Vega’s family on his website. At the time of his death, Vega was working on new music in collaboration with his wife Liz Lamere. In 2017, these final recordings were released by Fader on the album It.

The 1980 chartbuster song ‘Juke Box Babe’ from the singer’s debut solo album, won this vocalist a lot of international acclaims and also helped him grab the attention of all major record labels.