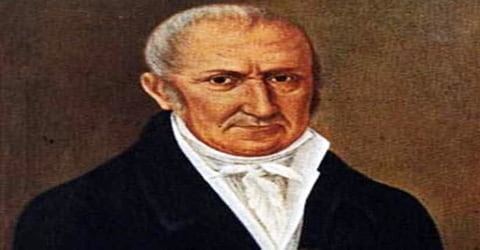 Alessandro Volta – Italian physicist, chemist, and a pioneer of electricity and power.

Known for: Invention of the electric cell; Discovery of methane; Volt; Voltage; Voltmeter Alessandro Volta was an Italian physicist whose invention of the electric battery provided the first source of continuous current. He was born February 18, 1745, Como, Lombardy (Italy). Volta became a professor of physics at the Royal School of Como in 1774. In 1775 his interest in electricity led him to improve the electrophorus, a device used to generate static electricity. He discovered and isolated methane gas in 1776. Three years later he was appointed to the chair of physics at the University of Pavia.

He invented the Voltaic pile in 1799 and reported the results of his experiments in 1800 in a two-part letter to the President of the Royal Society. With this invention, Volta proved that electricity could be generated chemically and debunked the prevalent theory that electricity was generated solely by living beings. Volta’s invention sparked a great amount of scientific excitement and led others to conduct similar experiments which eventually led to the development of the field of electrochemistry.

He wrote the first electromotive series. This showed, from highest to lowest, the voltages that different metals can produce in a battery. (We now talk of standard electrode potentials, meaning roughly the same thing.) Discovered that electric potential in a capacitor is directly proportional to electric charge.

In recognition of Alessandro Volta’s contributions to science, the unit of electric potential is called the volt.

By 1800 he had developed the so-called voltaic pile, a forerunner of the electric battery, which produced a steady stream of electricity. In honor of his work in the field of electricity, Napoleon made him a count in 1801. The electrical unit known as the volt was named in his honor. In 1819 he finally retired to private life in his country house in Camnago, where he died in 1827.

Despite his professional success, Volta tended to be a person inclined towards domestic life and this was more apparent in his later years. At this time he tended to live secluded from public life and more for the sake of his family until his eventual death in 1827 from a series of illnesses which began in 1823. The SI unit of electric potential is named in his honor as the volt. Alessandro Volta, in full Conte Alessandro Giuseppe Antonio Anastasio Volta, was born in Como, Lombardy, Italy, on February 18, 1745. His family was part of the nobility, but not wealthy. His father, Filippo Volta, was of noble lineage. His mother, Donna Maddalena, came from the family of the Inzaghis. Until the age of four, he showed no signs of talking, and his family feared he was not very intelligent or possibly dumb. Fortunately, their fears were misplaced.

His father died leaving unpaid debts when Alessandro was seven. The young Alessandro was educated at home by his uncle until he was twelve years old. He then started studies at a Jesuit boarding school. The Jesuit school charged no fees but pressurized him to become a priest. His family did not want this and withdrew him from the school after four years. Volta then studied at the Benzi Seminary until reaching eighteen years of age.

Volta’s family wanted him to become a lawyer. Volta had his own ideas! He was interested in the world around him; he wanted to be a scientist.

Although as a child he had been slow to speak Italian, Volta now seemed to have a special talent for languages. Before he left school, he had learned Latin, French, English, and German. His language talents helped him in later life when he traveled with the aim of discussing his work with scientists in Europe’s centers of science.

Aged 18, Volta was bold enough to begin an exchange of letters about electricity with two leading physicists: Jean-Antoine Nollet in Paris, and Giambatista Beccaria in Turin. Beccaria did not like some of Volta’s ideas and encouraged him to learn more by doing experiments.

Volta was raised as a Catholic and for all of his life continued to maintain his belief. Because he was not ordained a clergyman as his family expected, he was sometimes accused of being irreligious and some people have speculated about his possible unbelief, stressing that “he did not join the Church”, or that he virtually “ignored the church’s call”. In 1765 Volta had reached 20 years of age. His wealthy friend Giulio Cesare Gattoni had built a physics laboratory in his home. For several years he kindly allowed Volta to do experiments in this laboratory. In 1765 Volta wrote his first scientific paper, which he addressed to Giambatista Beccaria, about static electricity generated by rubbing different substances together i.e. triboelectricity.

In 1769 Volta published a dissertation titled On the Attractive Force of the Electric Fire, and on the Phenomena Dependent on It, which he sent to Beccaria. He discussed his ideas on the causes of electrical attraction and repulsion and compared these with gravity. He set out his position that, like gravity, static electricity involved action at a distance. The main scientists influencing his thinking were Isaac Newton, Roger Boscovich, Benjamin Franklin and Giambatista Beccaria himself.

In 1774, he became a professor of physics at the Royal School in Como. A year later, he improved and popularised the electrophorus, a device that produced static electricity. His promotion of it was so extensive that he is often credited with its invention, even though the machine operating on the same principle was described in 1762 by the Swedish experimenter Johan Wilcke. In 1777, he traveled through Switzerland. There he befriended H. B. de Saussure.

In the years between 1776 and 1778, Volta studied the chemistry of gases. He researched and discovered methane after reading a paper by Benjamin Franklin of the United States on “flammable air”. In November 1776, he found methane at Lake Maggiore, and by 1778 he managed to isolate methane. He devised experiments such as the ignition of methane by an electric spark in a closed vessel.

In 1779 he became a professor of experimental physics at the University of Pavia, a chair that he occupied for almost 40 years.

In 1791 Volta’s friend Luigi Galvani announced that the contact of two different metals with the muscle of a frog resulted in the generation of an electric current. Galvani interpreted that as a new form of electricity found in living tissue, which he called “animal electricity.” Volta felt that the frog merely conducted a current that flowed between the two metals, which he called “metallic electricity.” He began experimenting in 1792 with metals alone. (He would detect the weak flow of electricity between disks of different metals by placing them on his tongue.) Volta found that animal tissue was not needed to produce a current. That provoked much controversy between the animal-electricity adherents and the metallic-electricity advocates, but, with his announcement of the first electric battery in 1800, victory was assured for Volta. (Galvani discovered that contact between frogs’ leg nerves and different metals caused the legs to move. We now understand that he had created an electric cell. The frog legs acted as the electrolyte.)

Volta performed various experiments on frogs’ legs. He found the key to getting them to move was contact with two different metals. Contact with pieces of the same metal did nothing. Then, moving away from frogs’ legs, in 1794, Volta did experiments to measure the electrical effect of bringing different pairs of metals into contact. He listed the metals in order of what he called their electromotive force.

In 1800, he announced a new electrical device, the Voltaic Pile, initially presented as an “artificial electric organ”, in controversy with the claimed autonomy of animal electricity. This device was made of alternating disks of zinc and copper with each pair separated by brine-soaked cloth. Attaching a wire to either end produces a continuous current of low intensity. This was the first direct current battery. This put an end (for a time) to Galvani’s theory of animal electricity. It is interesting to note that Volta described his battery as an electric organ and likened it to the electric organ of the torpedo fish, which had columnar stacks of cells.

The importance of the invention and its applications, which came about in a few months, seemed to prove the Como scientist right. His fame has since conquered the world. But the idea of animal electricity did not prove useless. Volta’s intention was to give rise to electrochemistry, electromagnetism and the modern applications of electricity. Galvani’s research was soon to develop into electrophysiology and modern biology. The possibility of producing electric currents was to change science and technology in the new century.

In 1781 to 1782 Volta traveled around most of Europe’s major scientific centers, including the French Academy in Paris, demonstrating his electrical equipment and inventions to eminent people such as Antoine Lavoisier and Benjamin Franklin. Volta was beginning to become well-known outside Italy. In 1782 Volta wrote about the condenser he had constructed (today we would call it a capacitor) to collect and store electric charge, and how he had used it to study a variety of electrical phenomena.

By 1797, Volta had completely proved his “contact theory” of electricity. He now knew that the key to producing what today we call a voltage was two metals connected by something moist, like frogs’ legs. The moist connection between the metals did NOT have to be an animal. Connecting the metals by placing them in a cup of dilute acid was a very effective way of producing electricity.

Volta said that in Galvani’s work, the frogs’ legs had served two functions:

Volta found that by connecting up more and more pairs of metals connected with a moist card, he could produce ever higher voltages, leading to significant electrical currents. And so the electrical battery was born.

In 1800, Volta described his results in a letter to Joseph Banks, at the Royal Society in London. Banks showed the letter to other scientists and arranged for Volta’s description of his discovery to be read out at a meeting of the Society and then published. In 1801 in Paris Volta gave a demonstration of his battery’s generation of electric current before Napoleon, who made Volta a count and a senator of the kingdom of Lombardy. The Austrian emperor Francis I made him director of the philosophical faculty at the University of Padua in 1815. The volt, a unit of the electromotive force that drives current, was named in his honor in 1881.

In 1809 Volta became an associate member of the Royal Institute of the Netherlands. In honor of his work, Volta was made a count by Napoleon Bonaparte in 1810. Volta retired in 1819 to his estate in Camnago, a frazione of Como, Italy, now named “Camnago Volta” in his honor. Volta received his greatest honor at the hands of his fellow scientists. The unit of electromotive force- the driving force that moves the electric current- is now called the “volt.”

A billion electron-volts is abbreviated “bev,” and when we speak of the particular atom-smasher called the bevatron, the “v” in the name stands for Volta. Volta died there on 5 March 1827, just after his 82nd birthday. Volta’s remains were buried in Camnago Volta.

Volta’s legacy is celebrated by the Tempio Voltiano memorial located in the public gardens by the lake. There is also a museum which has been built in his honor, which exhibits some of the equipment that Volta used to conduct experiments. Nearby stands the Villa Olmo, which houses the Voltian Foundation, an organization promoting scientific activities. Volta carried out his experimental studies and produced his first inventions near Como.

In 1881, scientists decided that the unit of electric potential would be called the volt to recognize Volta’s great contributions to electrical science.