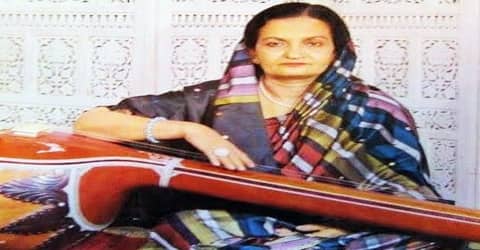 A well-known Indian singer of Ghazal, Dadra, and Thumri genres of Hindustani classical music, Begum Akhtar was born on 7th October 1914 in Faizabad town of Uttar Pradesh, British India. Honored with the title of Mallika-e-Ghazal (Queen of Ghazals), she was one of the best known Indian singers of her era, known for her soulful, poignant, and melancholy melodies.

A highly successful professional artiste, her personal life was a very tragic one. She was exposed to life’s difficulties at a young age after her father abandoned the family leaving her mother alone to fend for the children. Another tragedy followed soon after when she lost her beloved sister to poisoning. Miseries followed her throughout her early years, and singing offered her solace from life’s injustices and tragedies. Naturally inclined towards music, she started receiving singing lessons as a little girl and gave her first public performance at the age of 15. She received encouragement from the famous poet Sarojini Naidu which motivated the teenager to make a career in music. Good looking and talented, she ventured into films as an actress and also sang her songs herself in all her films. With her rich and soulful voice, she carved a niche for herself and received several honors and awards for her contribution to classical music. Begum Akhtar, in full Akhtari Bai Faizabadi, was born on 7th October 1914 in Faizabad, Uttar Pradesh, India, to Asghar Hussain and his second wife Mushtari. She had a twin sister. Her father, a lawyer, disowned the family when the girls were very young and never acknowledged their existence.

Her family belonged to the upper class of society and was not even inclined towards music. She showed interest in music at a very young age and was sent to train under the great sarangi player, Ustad Imdad Khan. Later, she learnt classical music from great exponents of this field like Mohammad Khan, Abdul Waheed Khan and Ustad Jhande Khan Saheb.

Begum Akhtar had a very traumatic and tragic early life. As a little girl, she was molested by her music teacher and raped as a teenager. She became pregnant following the rape and gave birth to a daughter who she presented to the society as her sister in an attempt to escape the stigma faced by unwed mothers.

Begum Akhtar married barrister Ishtiaq Ahmed Abbasi in the year 1945. Due to family restrictions, Begum Akhtar could not sing for almost five years. She fell ill and her only medicine was music. In the year 1949, she returned to record at the Lucknow Radio station and sang three Ghazals and a Dadra. She felt so satisfied and happy that she wept with joy. She then continued to give public performances and sing in concerts till she passed away.

At the tender age of fifteen, Begum Akhtar gave her first public performance. People were moved by her voice and she gained instant recognition. Her ghazals even impressed the famous poetess of India, Sarojini Naidu and were appreciated at a concert that was organized for helping victims of Bihar earthquake. Her first recording was done by the Megaphone Record Company and they released many gramophone records with her melodious Ghazals, thumris, dadras, etc. She was amongst the early female singers to give a public concert, and break away from singing in mehfils or private gatherings, and in time came to be known as Mallika-e-Ghazal (Queen of Ghazal). Begum Akhtar’s good looks and sensitive voice made her an ideal candidate for a film career in her early years. When she heard great musicians like Gauhar Jaan and Malak Jan, however, she decided to forsake the glamour of the film world for a career in Indian classical music. Her supreme artistry in light classical music had its moorings in the tradition of pure classicism. She chose her repertoire in primarily classical modes: a variety of raags, ranging from simple to complex.

In 1945, Akhtari Bai married a Lucknow-based barrister, Ishtiaq Ahmed Abbasi, and became known as Begum Akhtar. However, after marriage, due to her husband’s restrictions, she could not sing for almost five years and subsequently, fell ill. That is when her return to music was prescribed as a befitting remedy, and in 1949 she returned to the recording studios. She sang three ghazals and a Dadra at Lucknow All India Radio station. She wept afterward and returned to singing in concerts, which she continued to do unto death.

Begum Akhtar was persuaded by Madan Mohan, a famous music director to sing in two movies “Daana Paani” (1953) and “Ehsaan” (1954). The songs “Aye Ishq Mujhe Aur to Kuch Yaad” and “Hamein Dil Mein Basa Bhi Lo” were absolutely melodious and were liked by one and all. Her last movie stint was that of a classical singer in Satyajit Ray’s film “Jalsa Ghar”. Begum Akhtar was a refined Ghazal singer and was called as Mallika-e-Ghazal or the Queen of Ghazals. Her style of singing is inimitable and few can match up to her style. Most compositions were self-composed and based on Ragas. She sang publicly in Lucknow, in a women’s only concert in aid of the war, which was held in 1962.

Her voice matured with time, acquiring richness and depth. Begum Akhtar sang ghazals and other light classical pieces, in her inimitable style. She has nearly four hundred songs to her credit. She was a regular performer on All India Radio. She usually composed her own ghazals and most of her compositions were raag based. She sang the timeless Bengali classical song “Jochona Koreche Aari” (জোছনা করেছে আড়ি). Begum Akhtar performed last in a concert in Ahmedabad.

One of the most talented singers in Hindustani Classical music, Begum Akhtar was honored by the Government of India with Padma Shri in 1968. She was also awarded the Padma Bhushan posthumously in 1975.

During her last concert in Balaramapuram near Thiruvananthapuram, she raised the pitch of her voice as she felt that her singing had not been as good as she had wanted it to be and felt unwell. The stress she put herself under resulted in her falling ill and she was rushed to the hospital.

Begum Akhtar died on 30 October 1974 in the arms of Nilam Gamadia, her friend, who invited her to Ahmedabad, which became her final performance. Her tomb was a mango orchard within her home, ‘Pasanda Bagh’ in Thakurganj area, of Lucknow. She was buried alongside her mother, Mushtari Sahiba. However, over the years, much of the garden has been lost to the growing city, and the tomb has fallen into disrepair. The marble graves enclosed in a red brick enclosure were restored in 2012, along with their pietra dura style marble inlay. Attempts are on to convert her home built in 1936 in China Bazaar, Lucknow into a museum.

Bestowed with the title of Mallika-e-Ghazal (Queen of Ghazals), Begum Akhtar was one of the finest singers of Ghazal, Dadra, and Thumri genres of Hindustani classical music. Known for her deep, soulful voice, she has nearly four hundred songs to her credit and was also famous for her skills as a composer of raag based ghazals.

Her disciples include Shanti Hiranand, who later received Padma Shri and wrote a biography Begum Akhtar: The Story of My Ammi (2005). Art critic S. Kalidas directed a documentary on her titled Hai Akhtari.