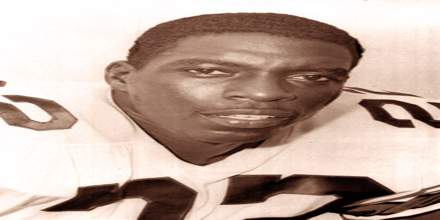 Bob Hayes, byname of Robert Lee Hayes, also known as “Bullet” Bob Hayes was born on December 20, 1942, in Jacksonville, Florida, U.S. He was an American sprinter who, although he was relatively slow out of the starting block and had an almost lumbering style of running, was a remarkably powerful sprinter with as much raw speed as any athlete in history. He also was a noted American football player.

He was although relatively slow out of the starting block and with a lumbering style of running, was remarkably powerful, with raw speed to burn. After setting and tying many sprinting records, Hayes played football as a wide receiver for the Dallas Cowboys for 10 seasons, starting in 1965, and helped the Cowboys win the Super Bowl in 1972.

An American track and field athlete, he was a two-sport stand-out in college in both track and football at Florida A&M University. He has one of the top 100 meter times by NFL players.

Hayes was enshrined in the Dallas Cowboys Ring of Honor in 2001 and was selected for induction in the Pro Football Hall of Fame in January 2009. He was officially inducted in Canton, Ohio on August 8, 2009. Hayes is the second Olympic gold medalist to be inducted to the Hall of Fame, after Jim Thorpe.

Once considered the world’s fastest man by virtue of his multiple world records in the 60-yard, 100-yard, 220-yard, and Olympic 100-meter dashes. Hayes is the only athlete to win both an Olympic gold medal and a Super Bowl ring. He also practiced basketball and track.

Hayes attended Matthew Gilbert High School (now a middle school) in Jacksonville, where he was a backup halfback on the football team.

Hayes was a highly recruited athlete, but still accepted a football scholarship from Florida A&M University a historically black college, where he ended up excelling in track & field.

The 1958 Gilbert High Panthers finished 12–0, winning the Florida Interscholastic Athletic Association black school state championship with a 14–7 victory over Dillard High School of Fort Lauderdale before more than 11,000 spectators. In times of segregation laws, their achievement went basically unnoticed, yet 50 years later they were recognized as one of the best teams in FHSAA history.

He never lost a race in the 100 yard or 100 meter competitions, but mainstream schools of the area still did not invite him to their sanctioned meets. In 1962 the University of Miami invited him to a meet on their campus, where he tied the world record of 9.2 seconds in the 100-yard dash, which had been set by Frank Budd of Villanova University the previous year. He also was the first person to break six seconds in the 60 yard dash with his indoor world record of 5.9 seconds.

In 1963, although he never used a traditional sprinter form, he broke the 100-yard dash record with a time of 9.1, a mark that would not be broken for eleven years (until Ivory Crockett ran a 9.0 in 1974). That same year, Hayes set the world best for 200 meters (20.5 seconds, although the time was never ratified) and ran the 220 yard dash in a time of 20.6 seconds (while running into an eight mph wind). He was selected to represent the United States in the 1964 Summer Olympics in Tokyo. His football coach Jake Gaither was not very high on giving Hayes time to train, which caused then President Lyndon B. Johnson to call him in order to allow Hayes time off and to keep him healthy.

At the 1964 Tokyo Olympics, Hayes’s performance in the 100 meters was amazing. His time equaled the current world record of ten seconds, but he achieved it while running on a wet cinder track that had been chewed up by a previous event. In addition, one of Hayes’s shoes had been misplaced, so he won the event while wearing one borrowed shoe—and he beat the other runners by more than two meters. In Sports Illustrated, Paul Zimmerman described Hayes’s response to winning the gold medal: “He did a little hop-step across the room, stopped, put his hands on his temples, looked upward and let out a big surge of emotion: ‘Ooooh! Ooooh! He did this for five minutes or so before being called out to get his medal. I can’t remember ever seeing such pure joy in a human being.” In the 4 × 100-meter relay, Hayes ran the anchor leg, taking his team from fifth place, three meters behind the leader, to the gold medal, winning by three meters. His split was clocked at 8.6 seconds. The team as a whole set a world record of 39.06 seconds.

The Dallas Cowboys selected Hayes in the seventh round (88th overall) of the 1964 NFL Draft with a future draft pick, which allowed the team to draft him before his college eligibility was over, taking a chance that the Olympic sprinter with unrefined football skills could excel as a wide receiver. He was also selected by the Denver Broncos in the 14th round (105th overall) of the 1964 AFL Draft, with a future selection. The bet paid off, due to his amazing feats in cleats. Hayes has been credited by many with forcing the NFL to develop a zone defense and the bump and run to attempt to contain him.

In 1975, Hayes was acquired by the San Francisco 49ers to team up with Gene Washington in the starting lineup. On October 23, he was waived after not playing up to expectations, in order to make room for wide receiver Terry Beasley.

Hayes ran into trouble in 1979, when he sold cocaine and speed to an undercover officer. He pleaded guilty and was sentenced to five years in prison, but was paroled after 10 months in jail. When he was released, he was eligible to be inducted into the Pro Football Hall of Fame, but because of his conviction, he was passed over.

His 7,295 receiving yards are the fourth-most in Dallas Cowboys history. To this day, Hayes holds ten regular-season receiving records, four punt return records and twenty-two overall franchise marks, making him one of the greatest receivers to ever play for the Cowboys.

Hayes died of kidney failure on September 18, 2002, in Jacksonville, Florida. Former Cowboys running back Calvin Hill told Teneshia L. Wright in the Florida Times Union, that he believed Hayes’s most memorable characteristics, apart from his athletic abilities, were his kindness and humor. “Here was a guy who talked to emperors and kings,” Hill said. “Yet he could meet a janitor and make that janitor feel like he’s the most important person in the world.”

In 2004, he was named to the Professional Football Researchers Association Hall of Very Good in the association’s second HOVG class.

On August 8, 2009, Bob Hayes was inducted into the Pro Football Hall of Fame.