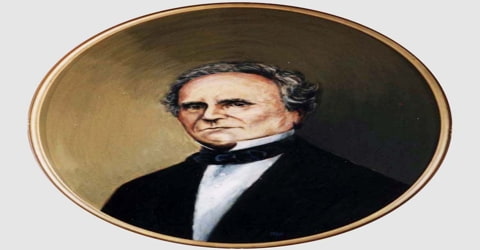 Charles Babbage was born on Dec. 26, 1791 in England. He was a polymath and became a mathematician, mechanical engineer, inventor, and philosopher. He contributed to many different scientific fields but his most famous work is designing a programmable computing device.

Considered by some to be a “father of the computer”, Babbage is credited with inventing the first mechanical computer that eventually led to more complex electronic designs, though all the essential ideas of modern computers are to be found in Babbage’s analytical engine. His varied work in other fields has led him to be described as “pre-eminent” among the many polymaths of his century.

In 1810, he was accepted to Trinity College, Cambridge. He later transferred to Peterhouse, Cambridge where he received an honorary degree in mathematics. It was as a student that he conceived of an idea to try and do calculations with a machine. It was after looking at a table for logarithms, (many of which were wrong) that he thought it would be better to try and work them out systematically.

In 1812 Babbage transferred to Peterhouse, Cambridge. He was the top mathematician there but did not graduate with honors. He instead received a degree without examination in 1814. He had defended a thesis that was considered blasphemous in the preliminary public disputation, but it is not known whether this fact is related to his not sitting the examination.

In 1991, a functioning Difference Engine No. 2 was built based on Babbage’s original drawings at the Science Museum, London. It consisted of 8,000 parts, weighed five tons, and measured 11 feet long. The engine was built under conditions that were available during the 19th century. In 2000, the Science Museum also completed the printer Babbage had designed for the difference engine.

Babbage managed to squeeze in an incredible variety of activities between dealing with the government and working on his engines. In addition to other subjects, he wrote several articles on mathematics, the decline of science in England, the rationalization of manufacturing processes, religion, archeology, tool design, and submarine navigation. He helped found the Astronomical Society, which later became the Royal Astronomical Society, as well as other organizations. He was a Lucasian professor of mathematics at Cambridge for ten years. He was better known, though, for his seemingly endless campaign against organ-grinders (people who produce music by cranking a hand organ) on the streets of London.

He always returned to his great engines—but none were ever finished. His father, Benjamin Jr., was a banker and merchant. One of his grandfathers, Benjamin Sr., had been mayor of Totnes, England. Babbage was always curious—when he would receive a new toy, he would ask his mother, Elizabeth, what was inside of it. He would then take apart the toy to figure out how it worked. Babbage was also interested in mathematics at a young age, and he taught himself algebra.

His father was a banker and he was the partner of William Praed. Together they founded Praed’s & Co. of Fleet Street London in 1801.

When he was 8 years of age, Charles Babbage was sent to the countryside at Alphington near Exeter for schooling to help him recover from a fever that had nearly ended his life. Later he also attended the King Edward VI Grammar School in Totnes, South Devon but due to his poor health he returned home and was educated by private tutors.

The Babbage family was wealthy, and Charles received much of his early education from private tutors. In 1810 he entered Trinity College at Cambridge University. He found that he knew more about mathematics than did his instructors. Very unhappy with the poor state of mathematical instruction there, Babbage helped to organize the Analytical Society, which played a key role in reducing the uncritical following of Sir Issac Newton (1642–1727; English scientist, mathematician, and astronomer) at Cambridge and at Oxford University.

Babbage, John Herschel, George Peacock, and several other friends formed the Analytical Society in 1812; they were also close to Edward Ryan. As a student, Babbage was also a member of other societies such as The Ghost Club, concerned with investigating supernatural phenomena, and the Extractors Club, dedicated to liberating its members from the madhouse, should any be committed to one.

In 1812 Babbage transferred to Peterhouse, Cambridge. He was the top mathematician there but did not graduate with honors. He instead received a degree without examination in 1814. He had defended a thesis that was considered blasphemous in the preliminary public disputation, but it is not known whether this fact is related to his not sitting the examination.

In 1814, the same year of Babbage’s graduation from Cambridge, he married Georgiana Whitmore.

His youngest surviving son, Henry Prevost Babbage (1824–1918), went on to create six small demonstration pieces for Difference Engine No. 1 based on his father’s designs, one of which was sent to Harvard University where it was later discovered by Howard H. Aiken, pioneer of the Harvard Mark I. Henry Prevost’s 1910 Analytical Engine Mill, previously on display at Dudmaston Hall, is now on display at the Science Museum. At Cambridge, he was disappointed by the quality of the maths teaching but joined the Analytical Society – a group of like-minded students, interested in exploring issues of mathematics. It was as a student that he conceived of an idea to try and do calculations with a machine. It was after looking at a table for logarithms, (many of which were wrong) that he thought it would be better to try and work them out systematically.

Babbage became a lecturer at the Royal Institution where he lectured about astronomy. In 1816, he was elected a Fellow of the Royal Society.

In 1820 Babbage helped found the Astronomical Society and in 1824 he won its Gold Medal, “for his invention of an engine for calculating mathematical and astronomical tables”.

In 1822, he began working on his ‘difference engine’ that sought to mechanically compute calculations. Like many of Babbage’s machines, they were never brought to completion. This was partly because of his personality, and also because his funding often dried up. He wasn’t always the best communicator of his ideas, and he could be dismissive of the very people who were funding him. There was often a frosty relationship between Babbage and those he was trying to impress.

Meanwhile, the idea for a far grander engine had entered Babbage’s ever-active mind: the “analytical engine.” This machine would be able to perform any mathematical operation according to a series of instructions given to the machine. Babbage asked the government for a decision on which engine to finish. After an eight-year pause for thought, the government decided that it wanted neither.

Babbage began building his first small model of the calculating engine in 1819 and it was completed in 1822 (Difference Engine 0). The machine calculated and printed mathematical tables and was powered by cranking a handle. The machine was called a “difference engine” after the mathematical theory on which the machine’s operation was based. The British government was interested in his machine and Babbage was given £1,700 to begin on a full-scale machine (Difference Engine No. 1). It was designed to calculate and tabulate polynomial functions. Over the following years, over £17,000 would be spent on the project.

On his father’s death in 1827, Babbage inherited a large estate (value around £100,000, equivalent to £7.94 million or $10.2 million today), making him independently wealthy. After his wife’s death in the same year, he spent time traveling. In Italy, he met Leopold II, Grand Duke of Tuscany, foreshadowing a later visit to Piedmont. In April 1828 he was in Rome, and relying on Herschel to manage the difference engine project, when he heard that he had become a professor at Cambridge, a position he had three times failed to obtain (in 1820, 1823 and 1826).

Unfortunately making the parts required was costly. In 1832 a small working portion was built. However, work on the full-scale difference engine stopped in 1833.

If the difference engine had been built it would have had over 25,000 working parts, weighted over 13 metric tons and have been over 8 feet (2.4m) tall.

In 1837, Babbage became interested in building a more ambitious analytical engine. This would be more powerful than the original difference engine and when built would be the first working computer for general-purpose computation.

It was programmable by using punched cards, an idea borrowed from the Jacquard loom used for weaving complex patterns in textiles. A trial part was built but again it was never fully completed. He also designed a printer for his new engine.

The government decided to stop funding the projects in 1842. Between 1846 and 1849 Babbage designed a new improved difference engine (Difference Engine No. 2)

His machines were considered one of the very first mechanical computers ever to be invented. The fact that they were not actually built was not due to a design flaw but rather, it was due to lack of funding.

While the machines he designed were mechanical and bulky, the basic concept is similar to the modern computer. It is for this reason why he is often looked at as one of the pioneers of computers.

From 1828 to 1839 Babbage was Lucasian Professor of Mathematics at Cambridge University.

He was elected a Foreign Honorary Member of the American Academy of Arts and Sciences in 1832. Babbage was out of sympathy with colleagues: George Biddell Airy, his predecessor as Lucasian Professor of Mathematics at Trinity College, Cambridge, thought an issue should be made of his lack of interest in lecturing. Babbage planned to lecture in 1831 on political economy. Babbage’s reforming direction looked to see university education more inclusive, universities doing more for research, a broader syllabus and more interest in applications; but William Whewell found the programme unacceptable. A controversy Babbage had with Richard Jones lasted for six years. He never did give a lecture.

Apart from computers, he contributed other inventions – such as a pilot or ‘cow catcher’ to be put on the front of engines to catch obstacles on railways. These were widely used in America. At various times, he worked for Brunel’s Great Western Railways.

Babbage published “On the Economy of Machinery and Manufactures” in 1832 about the industrial production which was well received. In the book, it described what is now known as the “Babbage Principle” which noted the advantages of using division of labor in factories.

He wrote a natural theology book “On the Power, Wisdom, and Goodness of God, as manifested in the Creation” in 1837.

In 1838, Babbage invented the pilot (also called a cow-catcher), which is the metal frame attached to the front of locomotives that clears the tracks of obstacles.

Babbage also invented an ophthalmoscope, which is used in eye examinations.

Babbage was raised in the Protestant form of the Christian faith, his family having inculcated in him an orthodox form of worship. He explained:

My excellent mother taught me the usual forms of my daily and nightly prayer; and neither in my father nor my mother was there any mixture of bigotry and intolerance on the one hand, nor on the other of that unbecoming and familiar mode of addressing the Almighty which afterward so much disgusted me in my youthful years. — Babbage, (1864) Charles Babbage died on Oct. 18, 1871, aged 79. He is buried in the Kensal Green Cemetery in London. Cause of death was “renal inadequacy”.

In 2011, researchers in Britain proposed a multimillion-pound project, “Plan 28”, to construct Babbage’s Analytical Engine. Since Babbage’s plans were continually being refined and were never completed, they intended to engage the public in the project and crowd-source the analysis of what should be built. It would have the equivalent of 675 bytes of memory and run at a clock speed of about 7 Hz. They hope to complete it by the 150th anniversary of Babbage’s death, in 2021. There is a black plaque commemorating the 40 years Babbage spent at 1 Dorset Street, London. Locations, institutions and other things named after Babbage include:

The former chain retail computer and video-games store “Babbage’s” (now GameStop) was named after him.