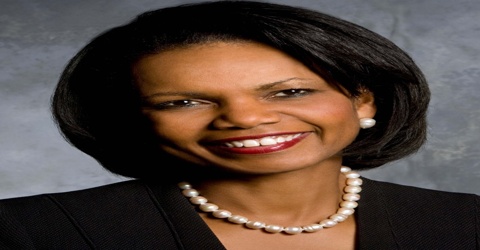 Condoleezza Rice was born on November 14, 1954, in Birmingham, Alabama, U.S. She is an American educator and politician, who served as national security adviser (2001–05) and secretary of state (2005–09) to U.S. Pres. George W. Bush. Rice was the first female African-American Secretary of State, as well as the second African-American Secretary of State (after Colin Powell), and the second female Secretary of State (after Madeleine Albright). Rice was President Bush’s National Security Advisor during his first term, making her the first woman to serve in that position. Before joining the Bush administration, she was a professor of political science at Stanford University, where she served as provost from 1993 to 1999. Rice also served on the National Security Council as the Soviet and Eastern Europe Affairs Advisor to President George H. W. Bush during the dissolution of the Soviet Union and German reunification.

In March 2009, Rice returned to Stanford University as a political science professor and the Thomas and Barbara Stephenson Senior Fellow on Public Policy at the Hoover Institution. In September 2010, she became a faculty member of the Stanford Graduate School of Business and a director of its Global Center for Business and the Economy. Condoleezza Rice was born on November 14, 1954 in Birmingham, Alabama. She was born as the only child of Angelena and John Wesley Rice, Jr. Her mother was a high school teacher while her father was a high school guidance counselor and Presbyterian minister. She was raised in a racially segregated section of Alabama. She began to learn music and ballet at the age of three. As a teenager, she received piano lessons and aimed to become a concert pianist.s

While Rice ultimately did not become a professional pianist, she still practices often and plays with a chamber music group. She accompanied cellist Yo-Yo Ma playing Johannes Brahms’ Violin Sonata in D Minor at Constitution Hall in April 2002 for the National Medal of Arts Awards.

In the 1970s, she dated and was briefly engaged to American football player Rick Upchurch. She broke off the relationship. She never married and does not have any children. Her mother, Angelena Rice, died of breast cancer in August 1985, aged 61. In July 1989, her father, John Wesley Rice, married Clara Bailey, to whom he remained married until his death, in December 2000, aged 77. He was a Presbyterian minister, high school guidance counsellor, and a football and basketball coach, before becoming an administrator at the University of Denver where his daughter earned an undergraduate degree and later a PhD in International Studies.

On August 20, 2012, it was announced that Rice was one of the first two women to be admitted as members to Augusta National Golf Club (the other is South Carolina financier Darla Moore). In 2014, Rice was named as one of ESPNW’s Impact 25. In the mid-1980s, Rice spent a period in Washington, D.C., working as an international affair fellow attached to the Joint Chiefs of Staff. Rice was a Democrat until 1982, when she changed her political affiliation to Republican, in part because she disagreed with the foreign policy of Democratic President Jimmy Carter, and because of the influence of her father, who was Republican.

In 1989, she became director of Soviet and East European affairs with the National Security Council, and special assistant to President George H.W. Bush during the dissolution of the Soviet Union and German reunification. In 1997, she served on the Federal Advisory Committee on Gender-Integrated Training in the Military.

At a 1985 meeting of arms control experts at Stanford, Rice’s performance drew the attention of Brent Scowcroft, who had served as National Security Advisor under Gerald Ford. With the election of George H. W. Bush, Scowcroft returned to the White House as National Security Adviser in 1989, and he asked Rice to become his Soviet expert on the United States National Security Council. According to R. Nicholas Burns, President Bush was “captivated” by Rice, and relied heavily on her advice in his dealings with Mikhail Gorbachev and Boris Yeltsin. At Stanford, in 1992, Rice volunteered to serve on the search committee to replace outgoing president Donald Kennedy. The committee ultimately recommended Gerhard Casper, the Provost of the University of Chicago. Casper met Rice during this search, and was so impressed that in 1993, he appointed her as Stanford’s Provost, the chief budget and academic officer of the university in 1993 and she also was granted tenure and became full professor. Rice was the first female, first African-American, and youngest Provost in Stanford’s history. She was also named a senior fellow of the Institute for International Studies, and a senior fellow (by courtesy) of the Hoover Institution.

A few years later, in 2001, Rice was appointed national security adviser by President George W. Bush, becoming the first black woman (and second woman) to hold the post. She went on to become the first black woman to serve as U.S. Secretary of State—she became the nation’s 66th Secretary of State in 2004, following Colin Powell’s resignation, and served from January 2005 to 2009.

On January 18, 2003, The Washington Post reported that Rice was involved in crafting Bush’s position on race-based preferences. Rice has stated that “while race-neutral means are preferable”, race can be taken into account as “one factor among others” in university admissions policies.

As Secretary of State, Rice has dedicated her department to “Transformational Diplomacy,” with a mission of building and sustaining democratic, well-governed states around the world and the Middle East in particular. To that end, she has relocated American diplomats to such hardship locations as Iraq, Afghanistan and Angola, and required them to become fluent in two foreign languages. She also created a high-level position to de-fragment U.S. foreign aid. In March 2004, Rice declined to testify before the National Commission on Terrorist Attacks Upon the United States (the 9/11 Commission). The White House claimed executive privilege under constitutional separation of powers and cited past tradition. Under pressure, Bush agreed to allow her to testify so long as it did not create a precedent of presidential staff being required to appear before United States Congress when so requested. Her appearance before the commission on April 8, 2004, was accepted by the Bush administration in part because she was not appearing directly before Congress. She thus became the first sitting National Security Advisor to testify on matters of policy.

In April 2007, Rice rejected, on grounds of executive privilege, a House subpoena regarding the prewar claim that Iraq sought yellowcake uranium from Niger.

In October 2003, Rice was named to run the Iraq Stabilization Group, to “quell violence in Iraq and Afghanistan and to speed the reconstruction of both countries.” By May 2004, The Washington Post reported that the council had become virtually nonexistent.

Leading up to the 2004 presidential election, Rice became the first National Security Advisor to campaign for an incumbent president. She stated that while: “Saddam Hussein had nothing to do with the actual attacks on America, Saddam Hussein’s Iraq was a part of the Middle East that was festering and unstable, and was part of the circumstances that created the problem on September 11.”

In August 2012, Rice and South Carolina businesswoman Darla Moore became the first women to (simultaneously) become members of the Augusta National Golf Club, located in Augusta, Georgia. The event was monumental. The club, which opened in 1933, had infamously been known for its all-male membership and repeated failure to admit women. Just a few weeks later, on August 29, 2012, Rice attended the Republican National Convention in Tampa, Florida, showing her support for the Republican Party’s 2012 election candidates, Mitt Romney and Paul Ryan. Rice delivered a riveting speech on the second day of the convention, spurring positive media attention: “I think my father thought I might be president of the United States. I think he would’ve been satisfied with secretary of state. I’m a foreign policy person and to have a chance to serve my country as the nation’s chief diplomat at a time of peril and consequence, that was enough,” she said, adding that her future plans focus on being an educator, not a politician.

She was presented with the U.S. Senator John Heinz Award for Greatest Public Service by an Elected or Appointed Official in 2003 by Jefferson Awards.

She received the U.S. Air Force Academy’s 2009 Thomas D. White National Defense Award for contributions to the defense and security of the United States in 2010.