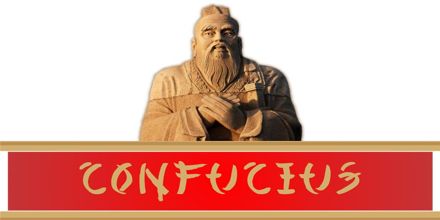 Confucius was an ancient Chinese teacher, politician, and philosopher. He belonged to the Spring and Autumn period of Chinese history. Confucius is one of the few leaders who based their philosophy on the virtues that are required for the day-to-day living. His philosophy centered on personal and governmental morality, correctness of social relationships, justice and sincerity. Known as Master Kong to the Chinese, he taught people how to cultivate the value of modesty, planning, respect, moral behavior, honesty and sincerity, apart from common sense. He preached that adopting these values was the only way a human being could lead a good life. Confucius was of the opinion that true happiness would only be brought from well-planned actions and helping of the fellow men. His philosophy was aimed at benefiting not only a few selected groups, but all the people of the empire he was a part of.

It is believed that Confucius was born in Zou, Lu state (near present-day Qufu, Shandong Province) in 551 B.C. According to Chinese tradition, his ancestors had migrated from the Song state to the Lu state and Confucius was a descendant of the Shang dynasty Kings.

At that time a class structure was prevalent in ancient China. Confucius belonged to Shi Class that was ranked between old nobility and the common people. People belonging to this class sought social position as per their skills and talents.

His father’s name was Kong He (aka Shuliang He) and he was an officer in the Lu Military. It is said that his father had divorced his first wife as she had given birth to two daughters and a disfigured son. Yan, Confucius’ mother, was his second wife.

At the age of 3 in 548 B.C he lost his father and was brought up by his mother Yan Zhengzai under difficult financial conditions.

At the age of 23 he lost his mother and as per the prevalent tradition, he spent 3 years in mourning.

There is not much information available regarding his education but it is said that he studied with Lao Dan and Daoist Master. He studied music with Chang Hong and Lute with Xiang.

In his early years, he worked as a book-keeper, cowherd and a clerk.

It is not known exactly when Confucius began his teaching career, but it does not appear to have been much before the age of thirty. In 518 B.C.E. he is said to have met the famous teacher Lao Tzu (sixth century B.C.E. ), who reportedly bluntly criticized Confucius for his stuffiness and arrogance.

It was in 501 B.C or when he was in his late 40s that he stepped into politics and was appointed the governor of a town in Lu state. At that time this was considered to be a minor position. He then served as minister of public works. However, he eventually became the “Minister of Crime” in Lu state.

The Lu state was headed by a ruling ducal house and there were three aristocratic families under the duke, whose heads held hereditary positions in the Lu bureaucracy. Confucius wanted to return the authority of the state to the duke and establish a centralized government. This was not possible without dismantling the fortifications of the city-strongholds belonging to the three aristocratic families.

He achieved considerable success in his plan but could not achieve the reforms that were aimed at restoration of the legitimate rule of the duke. In the process, he had made powerful enemies within the state.

He is believed to have departed his homeland in 497 BC after his support for the failed attempt of dismantling the fortified city walls of the powerful Ji, Meng, and Shu families. He left the state of Lu without resigning, and did not return as long as Viscount Ji Huan was alive.

According to another source (shiji), Confucius’ involvement in the government of the Lu state became a reason of distress for the neighboring state of Qi. Qi state was worried that Lu might become powerful so it tried to lure the Duke of Lu by sending him 100 horses and 80 beautiful dancing girls. The Duke was lured and indulged himself in pleasure and did not attend to official duties for three days. This left Confucius highly disappointed. Around 498 B.C he resigned and began travelling to north-east and central China where he propounded his political beliefs.

Confucianism concerns itself with the practical aspects of life, such as good manners, treating others kindly and enhancing family relations. Instead of being poetic about God or metaphysics, Confucius directed his teachings on moral and ethical grounds.

Bothered about earthly matters, he rested his theory on two main ideas – being a true gentleman and having proper conduct. He stressed that a true gentleman is one who has five characteristics – integrity, righteousness, loyalty, altruism and goodness. As for proper conduct, the second most important foundation of Confucianism, a person should practice social decorum and rituals, as it is the quickest path to ethical growth.

Confucius was of the opinion that moderation was the only way to stay between life’s extremes. He believed that each person should maintain the decorum of their position – for instance, a father should behave like a responsible person and not move away from his duties.

For him, family was very important and he believed that relationship between master and servant, father and son, husband and wife, elder and younger siblings and two friends must be honored. He also urged people to honor the aged people.

Confucius’ political thought emerged out of his ethical thought. According to him, the best government is one that governs through “rites” and people’s natural morality (ethics) and not by using bribery and coercion.

He urged people with political power to model themselves on earlier examples. He is believed to have used past institutions and rites for revival of a unified royal state.

He did not believe in the concept of “democracy” as he believed that the common masses lacked the intellect to make decisions for themselves, and that (in his view), since not everyone is created equal, not everyone has a right of self-government.

He supported the idea of government ruling by a virtuous king, who should follow the ideals of truth and honesty. He emphasized that if a ruler ruled correctly then others will follow the proper actions of their ruler.

He stressed the need to give due respect to superiors but he also said that the subordinates must give advice to their superiors if they believed the superiors were taking the wrong course of action.

He believed that rulers should rule by example and if they do so, there was no need for orders by force or punishment.

Confucius is credited with writing and editing some of the most influential traditional Chinese classics. These include a rearrangement of the Book of Odes as well as a revision of the historical Book of Documents. He also compiled a historical account of the 12 dukes of Lu, called the Spring and Autumn Annals. Lunyu, which sets forth Confucius’ philosophical and political beliefs, is thought to be compiled by his disciples. It is one of the “Four Books” of Confucianism that Chinese philosopher Zhu Xi, a self-proclaimed Neo-Confucian, published as Sishu in 1190. Far-reaching in its influence, Lunyu was later translated into English under the title The Analects of Confucius.

Convinced that his teachings had not made a significant impact on Chinese culture, Confucius died on November 21, 479 B.C. in Qufu, China, a year after losing his son, Tzu-lu, in battle. His followers held a funeral and established a mourning period in his honor. As of the fourth century B.C., Confucius was regarded as a sage who had deserved greater recognition in his time. By the second century B.C., during China’s first Han Dynasty, his ideas became the foundation of the state ideology. Today he is widely considered one of the most influential teachers in Chinese history.