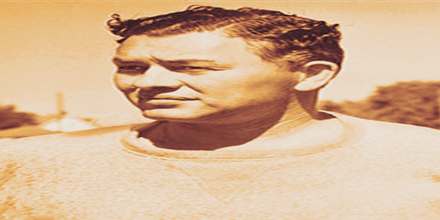 Curly Lambeau, byname of Earl Louis Lambeau was born on April 9, 1898, in Green Bay, Wisconsin, U.S. He was an American professional football player and gridiron football coach who had one of the longest and most distinguished careers in the history of the game. A founder of the Green Bay Packers in 1919, he served through 1949 as head coach of the only major team in American professional sports to survive in a small city.

He shares the distinction with rival George Halas of the Chicago Bears of coaching his team to the most NFL championships, with six. He was an inaugural inductee to the Pro Football Hall of Fame in 1963.

Lambeau was a standout multi-sport athlete at Green Bay East High School, and captain of its football team as a senior in 1917. Lambeau enrolled at the University of Wisconsin but then subsequently quit after freshmen football was cancelled that year. He then attended University of Notre Dame in 1918 and played for legendary coach Knute Rockne, making the Irish’s varsity squad as a freshman, but a severe case of tonsillitis forced him to return home before his sophomore year.

Lambeau was employed as a shipping clerk for the Indian Packing Company when he and George Calhoun, sports editor of the Green Bay Press-Gazette, hatched the idea to form a football team. On August 11, 1919, Lambeau and Calhoun met with prospective players in the editorial room of the Press-Gazette. After a discussion with Indian Packing Company executive Frank Peck, who agreed to provide backing money in exchange for use of the company name, the Green Bay Packers were born.

Lambeau was a player-coach at first. Playing halfback in the then-popular single wing offensive formation, he was both the primary runner and passer. Lambeau threw 24 touchdown passes, rushed for eight touchdowns, and caught three touchdowns in 77 games. Lambeau was the first Packer to throw a pass, throw a touchdown pass, and make a field goal in Green Bay Packer franchise history. He won his only National Football League championship as a player-coach in 1929, thereafter coaching only. In 1921, he was the team’s kicker. He also kicked 1 field goal each in 1922, 1924, and 1925.

The Packers’ most successful period came in the 1930s, thanks to the addition of receiver Don Hutson, one of the best receivers in the history of the NFL. Lambeau and Hutson pioneered the passing game, which allowed the Packers to dominate their competitors throughout the 1930s.

After returning to Green Bay, Lambeau went to work as a shipping clerk at the Indian Packing Company. Lambeau and George Whitney Calhoun founded the Green Bay Packers on August 11, 1919, after the packing company put up $500 for uniforms. The team’s name reportedly was offered to Curly by his girlfriend Agnes Aylward after a pickup game; Curly had wanted to call the team “The Green Bay Indians” to respect Indian Packing’s purchase of uniforms for the team; so Agnes simply blurted, “Well, for heaven’s sake, Curly, why don’t you just call them the Green Bay Packers!” The team’s naming rights were sold to the Acme Packing Company, and the team remained Packers.

The Packers initially played teams from Wisconsin and Michigan’s Upper Peninsula. However, the success of the team in 1919-20 quickly led to its joining of the American Professional Football Association (now called the National Football League) in 1921. During that season the team was owned by the Acme Packing Company and John and Emmet Clair of Chicago.

Lambeau established a series of practices and methods that would become commonplace within the NFL. He popularized the formation of summer training camps and film study sessions, and his was the first team to travel via airplane. Lambeau was also the first to create a separate training facility for his team, but his decision to spend $50,000 on the Rockwood Lodge for that purpose in 1946 caused a rift within management, and led to his departure from the Packers after the 1949 season.

In 1946, Lambeau purchased Rockwood Lodge, a former Norbertine retreat, creating the first self-contained training facility in professional football. The purchase was controversial among the Packers’ board of directors, many of whom balked at the $32,000 purchase price and $8,000 spent on renovations. Two of the directors nearly resigned. Lambeau’s players grew to hate the facility as well, partly because they were severely battered by the brick-hard limestone under the fields.

In addition, the Packers had begun noticeably slipping on the field after Hutson’s retirement in 1945. Still, the Packers remained competitive until 1948, when they suffered their first losing season since 1933, and only the second losing season in franchise history. The bottom fell out in 1949, when the Packers won only two games—at the time, their worst season ever.

Lambeau spent two years coaching the Chicago Cardinals and two more with the Washington Redskins before announcing his retirement after the 1955 season. He spent a total of 35 years as a head coach, compiling a record of 226 wins, 132 losses and 22 ties during his 33 official years in the NFL/APFA.

Among other things, Lambeau is credited with pioneering daily practices, the forward pass in the NFL, implementing pass patterns and flying to road games.

Lambeau was born April 9, 1898 in Green Bay, Wisconsin, to Marcelin Lambeau and Mary Sara La Tour, both of Belgian ancestry.

Lambeau was a standout multi-sport athlete at Green Bay East High School, and captain of its football team as a senior in 1917. Lambeau enrolled at the University of Wisconsin but then subsequently quit after freshmen football was cancelled that year. He then attended University of Notre Dame in 1918 and played for legendary coach Knute Rockne, making the Irish’s varsity squad as a freshman, but a severe case of tonsillitis forced him to return home before his sophomore year.

Lambeau was married three times: first to Marguerite Van Kessel from 1919 to 1934, ending in divorce with one son. His second wife, Susan Johnson, was a former Miss California and they were married from 1935 to 1940. He married Grace Garland in 1945 and was divorced in 1955.

The Packers’ home stadium, Lambeau Field, was named after him. The venue opened in 1957 as the second City Stadium, and was informally called “New” City Stadium for its first eight years. It was renamed in August 1965, two months after Lambeau’s death. The Packers then won three consecutive league titles, which has yet to be repeated.

Erected after the stadium’s 2003 renovation, a 14-foot (4.3 m) statue of Lambeau greets visitors.

Among other things, Lambeau is credited with pioneering daily practices, the forward pass in the NFL, implementing pass patterns and flying to road games.

Lambeau was elected to the Wisconsin Athletic Hall of Fame in 1961.

Lambeau was inducted into the Pro Football Hall of Fame’s inaugural class in 1963.