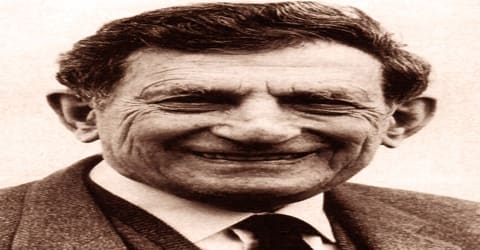 An American-born British theoretical physicist who developed a causal, nonlocal interpretation of quantum mechanics, David Bohm was born on December 20, 1917, in Wilkes-Barre, Pennsylvania, the U.S. to a Hungarian Jewish immigrant father, Samuel Bohm, and a Lithuanian Jewish mother. He is one of the most significant theoretical physicists of the 20th century and who contributed unorthodox ideas to quantum theory, neuropsychology and the philosophy of mind.

After graduating high school, Bohm went on to study science in college and later filled professorships at a few universities and has written several books on quantum physics and other related sciences. Bohm’s research, over the years, has become of interest to the American government. His research was instrumental in both the Manhattan Project and the Hiroshima bomb incident. Despite his significant contribution to the development of nuclear weapons for the country, this eminent scientist had to face imprisonment because of his suspected ties with the Communists. Though he was released, the incident proved to be a hindrance in his academic career as Princeton University denied to reappoint him as a professor. This forced Bohm to leave the US and he settled in Brazil. While some of his contributions are quite controversial, his earliest work on the ‘implicate and explicate order’ has been used as the template by which much of physics and science is judged. The ideas that he has expressed over the years have opened the line of thought for many others. David Bohm was truly a pioneer of the mind and human reality.

Bohm’s main concern was with understanding the nature of reality in general and of consciousness in particular as a coherent whole, which according to Bohm is never static or complete but rather an unfolding process. David Bohm, in full David Joseph Bohm, was born on December 20, 1917, in Wilkes-Barre, Pennsylvania. He and his younger brother Robert were raised mainly by their father, Samuel Bohm, a Hungarian Jewish immigrant, who owned a furniture store. Bohm’s mother, Frieda (Popky) Bohm, was a Lithuanian-Jewish woman who suffered from mental instabilities. As a boy, Bohm found it difficult to fit in with his peers. The struggles at home, his mother’s growing mental instability, and his father’s preoccupation with business all contributed to his own insecurities.

Bohm attended Pennsylvania State College (now Pennsylvania State University), graduating in 1939, and then the California Institute of Technology, for one year. He then transferred to the theoretical physics group directed by Robert Oppenheimer at the University of California, Berkeley Radiation Laboratory, where he obtained his doctorate. In 1947 Bohm became an assistant professor at Princeton University.

David Bohm married Sarah Woolfson in Israel in 1956. They had no children.

David Bohm was not a charismatic man and he kept his circle of friends quite small and intimate. He had only a few close friends, including a few mentors and colleagues such as Robert Oppenheimer, Albert Einstein, Yakir Aharonov and Jiddu Krishnamurti and Mort Weiss, whom he had met in his teen years and remained friends with throughout his life. Bohm was said to have had a tendency to believe in the paranormal and, according to friends, often had to be dissuaded from buying into some ne’er-do-wells schemes.

David Bohm’s scientific career really began while he was a graduate student at ‘California Institute of Technology’, more popularly referred to as Caltech, and later at the ‘University of California’ at Berkley. In 1943 Bohm was denied security clearance to work at Los Alamos, N.M., on the atomic bomb. His research in Berkeley still proved marginally useful to the Manhattan Project and directed his attention to plasma physics. In postwar papers, Bohm laid the foundations of modern plasma theory. Bohm’s lectures at Princeton developed into an influential textbook, Quantum Theory (1951) that contained a clear presentation of Danish physicist Niels Bohr’s Copenhagen interpretation of quantum mechanics. While working on that book, Bohm came to believe that a causal (non-Copenhagen) interpretation was also possible, contrary to the view than almost universally held among physicists. Encouraged in this pursuit by conversations with Albert Einstein, he developed an interpretation on the assumption that there existed unobserved hidden variables.

Bohm was invited to attend the prestigious Shelter Island Conference in June 1947 and later that year he secured the position of assistant professor at Princeton University where he worked closely with Albert Einstein. At Princeton, he published a number of articles on plasma physics. He was arrested in 1950 for contempt of Congress during the McCarthy era because of his Marxist views. However, he was acquitted in a trial the following year.

After the war (World War II), Bohm became an assistant professor at Princeton University. He also worked closely with Albert Einstein at the nearby Institute for Advanced Study. In May 1949, the House Un-American Activities Committee called upon Bohm to testify because of his previous ties to suspected communists. Bohm invoked his Fifth Amendment right to refuse to testify, and he refused to give evidence against his colleagues.

Bohm took held the position of Professor of Physics at the ‘University of São Paulo’ in Brazil from 1951, the same year he published his first book. While there, the majority of his work centered around causal theory, the subject of his 1952 publications, which many in the fields of science objected to, defending the Copenhagen interpretation of quantum mechanics to be the single possible perspective on the subject.

By the time his theory was published in 1952, political problems had forced Bohm to emigrate. He had been involved in left-wing politics in Berkeley during World War II, including membership in various organizations that Federal Bureau of Investigations director J. Edgar Hoover labeled communist fronts, which in the postwar climate of McCarthyism (see Joseph McCarthy) made him be seen as a security threat. Bohm refused to testify about his or others’ political beliefs to the House Committee on Un-American Activities in 1949, which resulted in his being charged with contempt of the U.S. Congress. Although Bohm was eventually acquitted of the charge, he was suspended from teaching duties and in 1951 lost his job at Princeton. With Einstein’s help, he found a position at the University of São Paulo in Brazil and in 1955 at the Technion in Haifa, Israel.

In 1955, David became a research fellow at ‘Technion’ at Haifa in Israel. During his two years there, he met and married his wife. In 1957 he moved to the United Kingdom as a research fellow at the University of Bristol. He published his second book “Causality and Chance in Modern Physics”. This book was about the philosophy of science and cemented his name as an original thinker. In 1957, Bohm and his student Yakir Aharonov published a new version of the Einstein-Podolsky-Rosen (EPR) paradox, reformulating the original argument in terms of spin. It was that form of the EPR paradox that was discussed by John Stewart Bell in his famous paper of 1964.

In 1959, Bohm and Aharonov discovered the Aharonov-Bohm effect, showing how a magnetic field could affect a region of space in which the field had been shielded, but its vector potential did not vanish there. That showed for the first time that the magnetic vector potential, hitherto a mathematical convenience, could have real physical (quantum) effects. In 1961, Bohm was made a professor of theoretical physics at the University of London’s Birkbeck College, becoming emeritus in 1987. His collected papers are stored there.

In 1961 Bohm met Jiddu Krishnamurti, an Eastern religious teacher whose book Bohm had previously read which marked the beginning of a twenty-five-year-long friendship. The two men then had a series of conversations which Bohm published in The Ending of Time in 1985.

David Bohm, a scientist-philosopher, was a rare combination of the spirit of science and philosophy. He was considered to be one of the world’s foremost theoretical physicists and the most influential among the new thinkers. He was a committed researcher who was intensely absorbed in the problems of the foundations of physics. He studied the theory of relativity and developed an alternative interpretation of quantum mechanics in order to eliminate the philosophical paradoxes that seemed to be prevalent in quantum mechanics. He developed metaphysics, the philosophy of the implicate order, to steer humanity to a new profound vision of reality.

In 1987, David Bohm retired from ‘Birkbeck College’, after publishing three more books. Bohm continued his work in quantum physics after his retirement, in 1987. His final work, the posthumously-published The Undivided Universe: An Ontological Interpretation of Quantum Theory (1993), resulted from a decades-long collaboration with Basil Hiley. He also spoke to audiences across Europe and North America on the importance of dialogue as a form of sociotherapy, a concept he borrowed from London psychiatrist and practitioner of Group Analysis Patrick de Maré, and he had a series of meetings with the Dalai Lama. He was elected Fellow of the Royal Society in 1990.

In 1990, just two years before his death, David Bohm was elected as a Fellow of the Royal Society.

In the early 1950s, David Bohm’s causal quantum theory program was mostly negatively received, with a widespread tendency among physicists to systematically ignore both Bohm personally and his ideas. There was a significant revival of interest in Bohm’s ideas in the late 1950s and the early 1960s; the Ninth Symposium of the Colston Research Society in Bristol in 1957 was a key turning point toward greater tolerance of his ideas.

However, his most controversial theory is what Bohm called the ‘Implicate Order’. This theory proposes that matter and life exist as one whole, coherent domain. He believed that the nature of reality couldn’t be reduced to segments. That we, through our own thoughts, create the separateness that exists between all things.