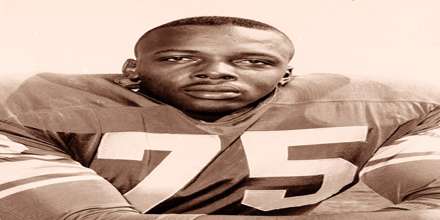 Deacon Jones, byname of David D. Jones was born on December 9, 1938, in Eatonville, Florida, U.S. He was an American professional gridiron football player, regarded as one of the sport’s premier defense players.

Jones specialized in quarterback “sacks”, a term which he coined. Nicknamed “the Secretary of Defense”, Jones is considered one of the greatest defensive players ever. The Los Angeles Times called Jones “Most Valuable Ram of All Time,” and former Redskins head coach George Allen called him the “Greatest Defensive End of Modern Football”.

He received just one scholarship offer after high school to play football at South Carolina State University, where he became active in the burgeoning civil-rights movement. After sitting out a year, Jones played one more season of college football at Mississippi Vocational College. The Los Angeles Rams selected him in the 14th round of the NFL Draft in 1961.

When he was 14 years old, he witnessed a carload of white teenagers laughingly hit an elderly black church woman with a watermelon. The woman died days later from the injury, and there was never a police investigation. “Unlike many black people then, I was determined not to be what society said I was,” Jones later recounted. “Thank God I had the ability to play a violent game like football. It gave me an outlet for the anger in my heart.”

Despite his unheralded college career, the 6’5″, 272-pound Deacon Jones quickly became a dominant professional defensive end thanks to his speed and strength. Also known as “The Secretary of Defense,” he would knock opposing linemen off-guard with his patented head slap before flattening the quarterback—a move he achieved so often, he coined the term “sack.”

Jones’ college football career consisted of a year at South Carolina State University in 1958, followed by a year of inactivity in 1959 and a final season at Mississippi Vocational College in 1960.

South Carolina State revoked Jones’ scholarship after they learned that he was a part of a civil rights protest.

Along with Lamar Lundy, Rosey Grier and Merlin Olsen, Jones headed the Rams’ “Fearsome Foursome” defensive line in the 1960s. He won unanimous all-league honors five straight years, from 1965 to 1969, and played in seven straight Pro Bowls, from 1965 to 1971. The Newspaper Enterprise Association named Jones the NFL Defensive Player of the Year in both 1967 and 1968.

In 1972, Jones was included in a multiplayer trade with the San Diego Chargers, where he was an instant success. He was named San Diego’s defensive captain and led all Chargers’ defensive linemen in tackles and won a berth on the AFC Pro Bowl squad. He concluded his career with the Washington Redskins in 1974. In the final game of his NFL career, the Redskins allowed him to kick the point-after-touchdown for the game’s last score. Along the way, Jones was named the Associated Press NFL Defensive Player of the Week four times: week 14, 1967; week 12, 1968; week 11, 1969; and week 10, 1970.

An extremely durable player, Jones missed only six games of a possible 196 regular-season encounters in his 14 National Football League seasons.

Jones is credited with an unofficial total of 173 1/2 over his 14-year career. He also missed just five of a possible 196 regular-season games – a remarkable record of durability in a physically demanding sport.

In 1999, Jones provided an L.A. Times reporter with some detailed imagery about his forte: “You take all the offensive linemen and put them in a burlap bag, and then you take a baseball bat and beat on the bag. You’re sacking them, you’re bagging them. And that’s what you’re doing with a quarterback.”

He also was the first pass rusher to use the head slap, a move that he said was, “…to give myself an initial head start on the pass rush, in other words an extra step. Because anytime you go upside a man’s head … or a woman; they may have a tendency to blink they (sic) eyes or close they eyes. And that’s all I needed.” “The head slap was not my invention, but Rembrandt, of course, did not invent painting. The quickness of my hands and the length of my arms, it was perfect for me. It was the greatest thing I ever did, and when I left the game, they outlawed it.”

In 1967, Jones had 21½ sacks in only 14 games; he tallied 22 sacks in 14 games the following year. If official, this would have stood as an NFL record until Michael Strahan’s 2001 campaign, in which he totaled 22½ sacks. (The term “sack” had not yet been coined at the time, and official sack statistics were not recorded by the NFL until 1982.)

After football, Jones worked as a television actor, and appeared in numerous TV programs since the 1970s, most often appearing in cameo roles. He appeared in an episode of The Odd Couple where he and Oscar were in a television commercial selling shaving products. He appeared on The Brady Bunch, and in a Bewitched episode in 1969, he played a guard to the Giant’s castle in “Sam & the Beanstalk”. Jones also played himself on an episode of Wonder Woman in 1978.

In the series G vs E, he played himself, but as an agent of “The Corps”. He also played a role in the hit show, ALF, where he played a father figure to Alf.

Jones was inducted into the Pro Football Hall of Fame in 1980, and was named to the NFL’s 75th anniversary all-time squad in 1994. He released his autobiography, Headslap: The Life and Times of Deacon Jones, in 1996. The following year, he launched the Deacon Jones Foundation, which works to provide opportunities for children from inner cities.

Jones worked for many companies, including the Miller Brewing Company, Haggar Clothing, Pacific Coast Medical Enterprises, and Epson America, and represented the NFL and Champion Products as spokesman for their Throwback campaigns. Jones was also chairman for AstraZeneca Pharmaceuticals in their national hypertension awareness program.

Jones served as the president and CEO of the Deacon Jones Foundation, an organization he founded in 1997 “to assist young people and the communities in which they live with a comprehensive program that includes education, mentoring, corporate internship, and community service.”

Jones served as a color analyst for Rams broadcasts on KMPC radio in the 1994 season, teaming with Steve Physioc and Jack Snow.

David D. “Deacon” Jones was born on December 9, 1938, in Eatonville, Florida, US., and lived in a four-bedroom house with his family of ten. Jones attended Hungerford High School, where he played football, baseball, and basketball. During high school, Jones developed a lump in his thigh and learned that it was a tumor; he had surgery to remove it.

Jones stated that he gave himself the nickname Deacon after joining the Rams because too many David Joneses were in the local phone book. “Football is a violent world and Deacon has a religious connotation,” he told the Los Angeles Times in 1980. “I thought a name like that would be remembered.”

Deacon Jones’s wife Elizabeth is the chief operating and financial officer of the Deacon Jones Foundation, based in Anaheim Hills, California, the community in which the couple lived.

Jones was a rhythm and blues singer during his football days, and was backed by the band Nightshift, which later became the group War. Jones sang onstage with Ray Charles, performed on The Hollywood Palace in 1967 and 1968, and on The Merv Griffin Show in 1970. Jones was the inspiration for the name of the 1977 song “Deacon Blues” by Steely Dan.

On June 3, 2013, Jones died at 74 of natural causes after suffering from lung cancer and heart disease at his home in Anaheim Hills, California. Jones’s death left Rosey Grier as the last surviving member of the Fearsome Foursome, the L.A. Rams defensive line, which is widely considered the best such unit in the history of the NFL. Of the former defensive standout, NFL commissioner Roger Goodell said, “Even with his fellow Hall of Famers, Deacon Jones held a special status. He was an icon among the icons.”, while Redskins General Manager Bruce Allen, son of Jones’s longtime coach George Allen, called him, “one of the greatest players in NFL history. Off the field … a true giant.”

Jones was inducted into the Pro Football Hall of Fame in 1980, and was named to the NFL’s 75th anniversary all-time squad in 1994.

He was elected to the Pro Football Hall of Fame in his first year of eligibility in 1980, and was named to the NFL’s 75th Anniversary All-Time Team in 1994. In 1999, he was ranked number 13 on The Sporting News list of the 100 Greatest Football Players, the highest-ranked player to have played for the Rams franchise, the highest-ranked defensive end, and the second-ranked defensive lineman behind Bob Lilly. The same year, he was named by Sports Illustrated as the “Defensive End of the Century”.