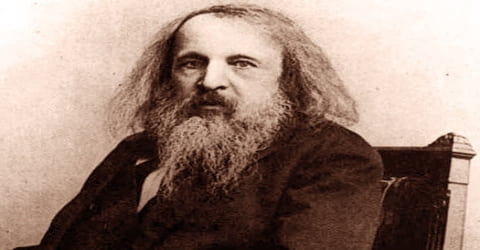 Dmitri Mendeleev, Russian in full Dmitry Ivanovich Mendeleyev, (born January 27 (February 8, New Style), 1834, Tobolsk, Siberia, Russian Empire; was a Russian chemist and inventor. He was born in the village of Verkhnie Aremzyani, near Tobolsk in Siberia. His family was unusually large: he may have had as many as 16 brothers and sisters, although the exact number is uncertain.

His father was a teacher who had graduated at Saint Petersburg’s Main Pedagogical Institute – a teacher training institution. His paternal grandfather Pavel Maximovich Sokolov was a Russian Orthodox priest from the Tver region. Ivan, along with his brothers and sisters, obtained new family names while attending the theological seminary. He worked as a school principal and a teacher of fine arts, politics, and philosophy at the Tambov and Saratov gymnasiums.

His mother Maria Dmitrievna was engaged in the education of children and in the household, she had the reputation of the intelligent and clever woman. Dmitri was the youngest in his family, last one from the fourteen children. When Dmitri turned 10 years he lost his father who had gone blind and soon died.

Dmitri Mendeleev was a Russian chemist who developed the periodic classification of the elements. Mendeleev found that, when all the known chemical elements were arranged in order of increasing atomic weight, the resulting table displayed a recurring pattern, or periodicity, of properties within groups of elements. In his version of the periodic table of 1871, he left gaps in places where he believed unknown elements would find their place. He even predicted the likely properties of three of the potential elements. The subsequent proof of many of his predictions within his lifetime brought fame to Mendeleev as the founder of the periodic law. Dmitri Mendeleev was born in the village of Verkhnie Aremzyani, near Tobolsk in Siberia, to Ivan Pavlovich Mendeleev (1783–1847) and Maria Dmitrievna Mendeleeva (née Kornilieva) (1793–1850). His father Ivan Pavlovich was the director of district schools and Tobolsk gymnasium. His mother Maria Dmitrievna was engaged in the education of children and in the household, she had the reputation of the intelligent and clever woman.

Mendeleev was the youngest of 17 siblings, of whom “only 14 stayed alive to be baptized” according to Mendeleev’s brother Pavel, meaning the others died soon after their birth. The exact number of Mendeleev’s siblings differs among sources and is still a matter of some historical dispute. Unfortunately for the family’s financial well being, his father became blind and lost his teaching position. His mother was forced to work and she restarted her family’s abandoned glass factory. At the age of 13, after the passing of his father and the destruction of his mother’s factory by fire, Mendeleev attended the Gymnasium in Tobolsk.

Aged 16, he moved to Saint Petersburg, which was then Russia’s capital city. He won a place at his father’s old college, in part because the head of the college had known his father. He trained there to be a teacher.

By the time he was 20, Dmitri Mendeleev was showing his promise and publishing original research papers. Suffering from tuberculosis, he often had to work from bed. He graduated as the top student in his year, despite the fact that his uncontrollable temper had made him unpopular with some of his teachers and fellow students.

In 1855, aged 21, he got a job teaching science in Simferopol, Crimea, but soon returned to St. Petersburg. There he studied for a master’s degree in chemistry at the University of St. Petersburg.

In 1856 he again came to St. Petersburg. He studied at the university, took his dissertation, and taught chemistry. In autumn he took one more dissertation and he got a degree of Private- Dozentin of the university. On 4 April 1862, he became engaged to Feozva Nikitichna Leshcheva, and they married on 27 April 1862 at Nikolaev Engineering Institute’s church in Saint Petersburg (where he taught). Their first daughter Masha was born in 1863, but she hadn’t lived for long, only for several months. In 1865 their son Volodya was born, and three years later their daughter Olya came to this world. Dmitri Ivanovich was very tied to his children, but he spent little time with them as he dedicated his life to the scientific activity. In this marriage based on the principle “love comes with habit” he wasn’t happy. In 1877 Dmitri met Anna Ivanovna Popova who became for him the person who was able to support him with a clever word in difficult moments. The girl was the creative and gifted person: she had been studying at the conservatory to play the piano and later she entered the Academy of Arts.

Dmitri Ivanovich arranged at his house youth “Fridays” where he got acquainted with Anna. His “Fridays” got transformed into literary and art “Wednesdays” in which regular visitors were gifted artists and professors. I.E. Repin, I.N, Kramskoy, A.I. Kuindzhi, I.I. Shishkin, N.P. Wagner, N.I. Beketov, K.D. Kraevich and others were among them.

Dmitri and Anna got married in 1881. Soon they gave birth to their daughter Luba, their son Ivan was born in 1883, and their twins Vasily and Maria were born in 1886. In the second marriage, Mendeleev was really happy. Mendeleev twisted cigarettes on his own, using expensive tobacco. He said that he would never give up smoking

Between 1859 and 1861, he worked on the capillarity of liquids and the workings of the spectroscope in Heidelberg. Here he wrote the articles “About Temperature of Absolute Boiling” and “About Expansion of Liquids” and also he discovered the phenomenon of “the critical temperature”.

Later in 1861, he published a textbook named Organic Chemistry. This won him the Demidov Prize of the Petersburg Academy of Sciences. In 1864 he had already become a professor, and two years later he became the head of the department, he was teaching and working on the “Fundamentals of Chemistry”. In 1865 he became Doctor of Science for his dissertation “On the Combinations of Water with Alcohol”. He achieved tenure in 1867 at St. Petersburg University and started to teach inorganic chemistry while succeeding Voskresenskii to this post. and by 1871 he had transformed Saint Petersburg into an internationally recognized center for chemistry research.

Though Mendeleev was widely honored by scientific organizations all over Europe, including (in 1882) the Davy Medal from the Royal Society of London (which later also awarded him the Copley Medal in 1905), he resigned from Saint Petersburg University on 17 August 1890. He was elected a Foreign Member of the Royal Society (ForMemRS) in 1892, and in 1893 he was appointed a director of the Bureau of Weights and Measures, a post which he occupied until his death.

The major inventions and discoveries –

Mendeleev is given credit for the introduction of the metric system to the Russian Empire.

He wrote: “The capital fact to note is that petroleum was born in the depths of the earth, and it is only there that we must seek its origin.”

He invented pyrocollodion, a kind of smokeless powder based on nitrocellulose. This work had been commissioned by the Russian Navy, which however did not adopt its use. In 1892 Mendeleev organized its manufacture. In 1863 there were 56 known elements with a new element being discovered at a rate of approximately one per year. Other scientists had previously identified periodicity of elements. John Newlands described a Law of Octaves, noting their periodicity according to relative atomic weight in 1864, publishing it in 1865. His proposal identified the potential for new elements such as germanium. The concept was criticized and his innovation was not recognized by the Society of Chemists until 1887. Another person to propose a periodic table was Lothar Meyer, who published a paper in 1864 describing 28 elements classified by their valence but with no prediction of new elements.

He wrote the names of the 65 known elements on cards, much like playing cards, one element on each card. He then wrote the fundamental properties of every element on its card, including atomic weight. He saw that atomic weight was important in some way – the behavior of the elements seemed to repeat as their atomic weights increased – but he could not see the pattern.

Convinced that he was close to discovering something significant, Mendeleev moved the cards about for an hour after hour until finally, he fell asleep at his desk.

When he awoke, he found that his subconscious mind had done his work for him! He now knew the pattern the elements followed. He later wrote:

“In a dream, I saw a table where all the elements fell into place as required. Awakening, I immediately wrote it down on a piece of paper.”

It took him only two weeks to publish The Relation between the Properties and Atomic Weights of the Elements. The Periodic Table had been unleashed on the scientific world.

Unaware of the earlier work on periodic tables going on in the 1860s, he made the following table:

Dmitri Mendeleev died in Saint Petersburg, February 2, 1907, six days before his 73rd birthday. He was killed by influenza. The crater Mendeleev on the Moon, as well as element number 101, the radioactive mendelevium, are named after him. A large lunar impact crater Mendeleev that is located on the far side of the Moon, as seen from the Earth, also bears the name of the scientist.

The Russian Academy of Sciences has occasionally awarded a Mendeleev Golden Medal since 1965.