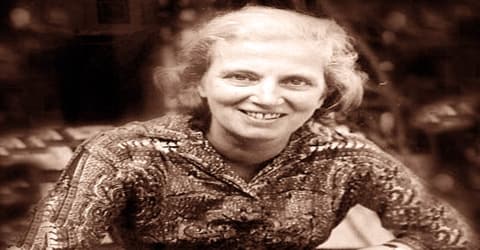 Dorothy Hodgkin was born Dorothy Mary Crowfoot in Cairo, Egypt on May 12, 1910. She was a British chemist who developed protein crystallography, for which she won the Nobel Prize in Chemistry in 1964.

Her parents, Grace and John Crowfoot, were both English but worked in Africa and the Middle East as archaeologists. She had three sisters, of whom she was the oldest. Her father also worked for the Egyptian Education Service as an inspector. Dorothy lived in those countries intermittently but received most of her education in England.

She became interested in chemistry while she was in school and fought to gain entry into the chemistry class, which until then was reserved for boys. Later, she earned her bachelor’s degree in chemistry from the Somerville College, Oxford and joined the Cambridge University for her doctoral work. However, on receiving the fellowship, she went back to Oxford within two years and finished her work. One year before she received her PhD, she was appointed as an Official Fellow and a Tutor in Natural Science at the Somerville College and remained there until her retirement.

She advanced the technique of X-ray crystallography, a method used to determine the three-dimensional structures of molecules. Among her most influential discoveries is the confirmation of the structure of penicillin as previously surmised by Edward Abraham and Ernst Boris Chain, and the structure of vitamin B12, for which she became the third woman to win the Nobel Prize in Chemistry. In 1969, after 35 years of work, Hodgkin was able to decipher the structure of insulin.

A woman of great intellect and an immense passion for science, she helped advance the x-ray crystallography technique, which was the key to studying and understanding three-dimensional structures of biochemical compounds. Dorothy Mary Crowfoot Hodgkin was born to John Winter Crowfoot and Grace Mary Hood Crowfoot in Cairo, Egypt on May 12, 1910. Dorothy was the oldest of three girls, born in Egypt. The family lived in Cairo during the winter months, returning to England each year to avoid the hotter part of the season in Egypt. In August 1914, during one of those stays in England, World War I began.

Her father, John worked for the Egyptian Education Service as a school inspector and later moved to Sudan where he became Director of Education and Director of Antiquities. He retired from his career in Sudan in 1926 and focused on archaeology. He became the Director of Jerusalem’s British School of Archaeology and went on different excavations in Samaria, Bosra, and Mount Ophel. Her mother, Grace Mary, was a botanist and took time to illustrate the different flora found in Sudan. She was also very much involved in John’s work.

Both parents believed in selflessness and service traits that they instilled in their four daughters as they were growing up. The children stayed with their grandparents while their parents worked abroad.

At Beccles, Dorothy was first admitted to the Parents’ National Educational Union School. In 1921, she was shifted to Sir John Leman School, where she studied till 1927. In this school, girls were not allowed to attend chemistry classes. However, Dorothy gave a tough fight and was ultimately allowed an entry.

In 1927, Dorothy earned her school leaving certificate with distinction in six subjects. Subsequently, she spent one-year studying botany and Latin. In 1928, she entered Somerville College, Oxford with chemistry and physics. For a brief period, she also studied archeology.

In 1932 Dorothy was awarded a first-class honors degree at the University, the third woman to achieve this distinction. It was when she was doing research for her Doctor of Philosophy at Newnham College, Cambridge, supervised by John Desmond Bernal, that Hodgkin became aware of the potential of X-ray crystallography to determine the structure of proteins.

On returning to Oxford in 1934, Hodgkin continued the research on the sterols and on other biologically interesting molecules like insulin. Once the Fellowship ended, she received assistance from Rockefeller and Nuffield Foundations. Her PhD was awarded in 1937 for research on X-ray crystallography and the chemistry of the sterols. Their eldest son Luke became a mathematician. Their daughter Elizabeth followed her father’s career, becoming a historian, while the younger son Toby studied botany and agriculture.

Dorothy Hodgkin was diagnosed with rheumatoid arthritis after experiencing pain in her hands for a period of time. Although she eventually spent a lot of time in a wheelchair, this did not stop her from pursuing her passion and she continued her research work. Hodgkin was given a research fellowship from Somerville College, Oxford in 1933. Meanwhile, in 1936, a year before she received her PhD., Dorothy Hodgkin was appointed as an Official Fellow and a Tutor in Natural Science at the Somerville College in Oxford. She remained with the University till her retirement in 1977.

In the 1940s, one of her students was Margaret Roberts, the future Prime Minister Margaret Thatcher, who installed a portrait of Hodgkin in Downing Street in the 1980s, though Hodgkin was a Labour supporter.

Initially, she worked in the Department of Mineralogy and Crystallography. Later when the department was divided Hodgkin continued her work in the sub-department of Chemical Crystallography. However, because she was a woman, she was officially barred from attending research meetings of the faculty chemistry club.

In the initial period, the laboratory condition was also very primitive. It was housed in one corner of Oxford University Museum of Natural History. It had only one window, which was accessed through a rickety staircase. Neither did she have any student to work under her.

While at Oxford, Hodgkin continued her research on x-ray crystallography. An important colleague during her career was John Desmond Bernal, an English physicist. Bernal was studying the structure of organic molecules, such as sterols and insulin, using crystallography, and Hodgkin was greatly influenced by him. X-ray crystallography is a method of determining three-dimensional crystal structure by passing an x-ray beam through the crystal and then analyzing the diffraction pattern that this produces. This whole method was very new when Hodgkin, who found it fascinating, began her study of it. But even during her first years of college, she began to use x-ray crystallography to examine the structure of an organic molecule.

The Second World War created a huge demand for penicillin and Hodgkin started studying penicillin hydrochloride. The structure was determined in 1945 and the three-dimensional biomolecular structure was published together with Charles Bunn in 1949.

In 1948, Hodgkin began her research on the structure of Vitamin B-12. After years of research work, she and her team were able to publish the final paper in 1955.

In 1956, she became the University Reader in X-ray Crystallography and in 1960, the Wolfson Research Professor of the Royal Society. During this time, she began regretting that she did not pursue her research on the structure of insulin and started working on it now. Hodgkin published as “Dorothy Crowfoot” until 1949, when she was persuaded by Hans Clarke’s secretary to use her married name on a chapter she contributed to The Chemistry of Penicillin.

Hodgkin showed great concern about social inequalities and aimed to resolve conflicts. She was president of the Pugwash Conferences on Science and World Affairs from 1976 to 1988.

In 1964, Hodgkin became the third woman to win the Nobel Prize in Chemistry. The first two to win that prize were Marie Curie and Irene Joliot-Curie.

In 1956, she received the Royal Medal from the Royal Society “in recognition of her distinguished work in the elucidation of structures of penicillin, vitamin B12 and other important compounds by the methods of X-ray crystallography.” (Order of Merit insignia of Dorothy Hodgkin, displayed in the Royal Society, London)

In 1976, she was awarded the Copley Medal by the Royal Society “in recognition of her outstanding work on the structures of complex molecules, particularly Penicillin, vitamin B12, and insulin”.

In 1982, she received the Lomonosov Gold Medal from the Russian Academy of Science “for outstanding achievements in biochemistry and crystal chemistry”. She died on July 29, 1994, after a stroke at her home in Warwickshire, England. She was one of five ‘Women of Achievement’ selected for a set of British stamps issued in August 1996.

Because of her outstanding work, the Dorothy Hodgkin fellowship was established by the Royal Society for those who are in the early stages of their career in research. She was also chosen as one of the five “Women of Achievement” whose faces appeared in a series of British stamps that were issued in August 1996. The Royal Society also celebrated their 350th anniversary in 2010 by releasing 10 stamps that showcased their most acclaimed members. Among the ten was Dorothy Hodgkin, making it the second time her face appeared on a stamp.

ABOUT US
Newspaper is your news, entertainment, music fashion website. We provide you with the latest breaking news and videos straight from the entertainment industry.
Contact us: contact@yoursite.com
FOLLOW US
© Newspaper WordPress Theme by TagDiv
MORE STORIES
Biography