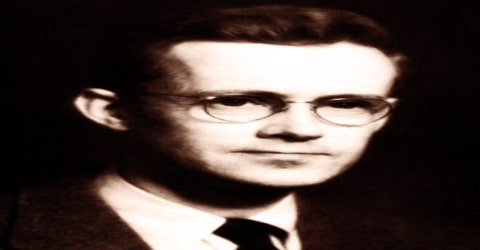 An American physicist who shared, with Felix Bloch of the United States, the Nobel Prize for Physics in 1952 for his independent discovery (1946) of nuclear magnetic resonance in liquids and in solids, Edward Mills Purcell was born on August 30, 1912, in Taylorville, Illinois, the U.S. Nuclear magnetic resonance (NMR) has become widely used to study the molecular structure of pure materials and the composition of mixtures.

Purcell is known in the science community for his independent discovery of nuclear magnetic resonance. Nuclear magnetic resonance (NMR) helps scientists determine the chemical structure and properties of materials with precision. NMR is also the basis of modern day magnetic resonance imaging (MRI) used as a non-invasive diagnostic tool to produce detailed images of organs and structures within the body. Purcell not only made a significant contribution to physics but contributed to astronomy as well. He is also remembered by biologists for his famous lecture “Life at Low Reynolds Number” in which he explained a principle called the Scallop theorem. He was the first to question the CP symmetry of particle physics. Purcell received many awards during his lifetime for his scientific, educational, and civic work. He served as a science advisor to the U. S. Presidents Dwight D. Eisenhower, John F. Kennedy, and Lyndon B. Johnson.

E.M. Purcell, in full Edward Mills Purcell, was born on August 30, 1912, in Taylorville, Illinois, U.S. His parents, Edward A. Purcell, and Mary Elisabeth Mills, were both natives of Illinois. He did his schooling in public schools in Taylorville and in Mattoon, Illinois and joined the ‘Purdue University’ in 1929.

Purcell received his BSEE in electrical engineering from Purdue University, followed by his M.A. and Ph.D. in physics from Harvard University. He was a member of the Alpha Xi chapter of the Phi Kappa Sigma Fraternity while at Purdue. After spending the years of World War II working at the MIT Radiation Laboratory on the development of microwave radar, Purcell returned to Harvard to do research.

When Purcell was fifteen, his family moved sixty miles east to the small town of Mattoon where his father became the general manager of the Illinois Southeastern Telephone Company. The Illinois Southeastern, although not part of the Bell system, received the Bell System Technical Journal which, because no one read it, Purcell’s father brought home. This provided young Purcell, as he said in an interview with Katherine Sopka of the American Institute of Physics, “a glimpse into some kind of wonderful world where electricity and mathematics and engineering and nice diagrams all came together.” Edward Mills Purcell worked as an instructor in physics for two years in Harvard after receiving his Ph.D. from the university. Later, he joined the Radiation Laboratory, ‘Massachusetts Institute of Technology’. Here, he became Head of the Fundamental Developments Group in the Radiation Laboratory, which was concerned with the exploration of new frequency bands and the development of new microwave techniques. After staying at Massachusetts during World War II years, he returned to Harvard to pursue research.

In 1946 Purcell developed his NMR detection method, which was extremely accurate and a major improvement over the atomic-beam method devised by the American physicist Isidor I. Rabi. Purcell became a professor of physics at Harvard University in 1949 and in 1952 detected the 21-centimeter-wavelength radiation emitted by neutral atomic hydrogen in interstellar space. Such radio waves had been predicted by the Dutch astronomer H.C. van de Hulst in 1944, and their study enabled astronomers to determine the distribution and location of hydrogen clouds in galaxies and to measure the rotation of the Milky Way. It also is the basis of magnetic resonance imaging (MRI), one of the most important medical advances of the 20th century. For his discovery of NMR, Purcell shared the 1952 Nobel Prize in physics with Felix Bloch of Stanford University.

Purcell also made contributions to astronomy as the first to detect radio emissions from neutral galactic hydrogen (the famous 21 cm line due to hyperfine splitting), affording the first views of the spiral arms of the Milky Way. This observation helped launch the field of radio astronomy, and measurements of the 21 cm line are still an important technique in modern astronomy. He has also made seminal contributions to solid state physics, with studies of spin-echo relaxation, nuclear magnetic relaxation, and negative spin temperature (important in the development of the laser). With Norman F. Ramsey, he was the first to question the CP symmetry of particle physics.

In 1958, Killian named Purcell to head a subcommittee of PSAC whose assignment was to define a space program for the United States. The drafting of their report was done by Purcell, Edwin Land (president, Polaroid Corporation), Herbert York (director, Livermore Laboratory), and Francis Bello (future editor of Scientific American). This report was disseminated throughout the United States and the world. Purcell was proud of this report, as its projections proved accurate as the space program developed and the Moon landings occurred. This report exerted an important influence on both the forming of the National Aeronautics and Space Administration (NASA) and on the Apollo Mission.

Purcell had a total of eighteen Ph.D. students sixteen of them before 1960. After the NMR period, Purcell mostly worked alone. As Purcell acknowledged in the Sopka interview, he did not “develop a kind of coherent ongoing self-perpetuating program of research. So I was dabbling really in different things in kind of an opportunistic way, which is not particularly good for graduate students, and I just sort of slipped into the role of not taking graduate students.” In addition, membership on government committees consumed much of his time.

Purcell made very important contributions to solid-state physics with studies of spin-echo relaxation, nuclear magnetic relaxation, and negative spin temperature (important in the development of the laser). With Norman F. Ramsey he was the first to question the CP symmetry, a conventional assumption that all particle forces are parity symmetric. Purcell served as scientific advisor to Presidents Dwight D. Eisenhower, John F. Kennedy, and Lyndon B. Johnson.

During the 1960s, Purcell turned his attention to astrophysics, which appealed to his interest in theoretical modeling. He examined the problem of light propagating through interstellar dust. Later, he became active in biophysics. Howard Berg, a Harvard Junior Fellow, showed that E. coli bacteria propel themselves by continuously rotating their corkscrew-like flagella. Purcell became interested in this and was able to describe E. coli hydrodynamically. For this work, Purcell and Berg were awarded the Biological Physics Prize in 1984 by the American Physical Society.

Purcell was the author of the innovative introductory text Electricity and Magnetism. The book, a Sputnik-era project funded by an NSF grant, was influential for its use of relativity in the presentation of the subject at this level. The 1965 edition, now freely available due to a condition of the federal grant, was originally published as a volume of the Berkeley Physics Course. Half a century later, the book is also in print as a commercial third edition, as Purcell and Morin. Purcell is also remembered by biologists for his famous lecture “Life at Low Reynolds Number”, in which he explained a principle referred to as the Scallop theorem.

For his discovery of NMR, Edward Mills Purcell Purcell shared the 1952 Nobel Prize in physics with Felix Bloch, a Swiss physicist who was at the time working at the Stanford University. While at the ‘Purdue University’, Purcell was a member of the Alpha Xi chapter of the ‘Phi Kappa Sigma Fraternity’. Later, he was also inducted into the Fraternity’s Hall of Fame as the first Phi Kap ever to receive a Nobel Prize.

In 1967, Purcell won the Oersted Medal of the ‘American Association of Physics Teachers’.

Edward Mills Purcell was awarded the National Medal of Science in 1979 for his service to the nation, and won the Oersted Medal in 1968, given by the American Association of Physics Teachers for his contribution to physics education.

Edward Mills Purcell died on March 7, 1997, at the age of 84, in Cambridge, Massachusetts, United States.

Purcell discovered nuclear magnetic resonance in liquids and solids. NMR is widely used to study the molecular structure of pure materials and the composition of mixtures. It is widely used in physics and chemistry for determining the chemical structure and properties of materials. NMR also serves as the basis of magnetic resonance imaging (MRI), one of the most important medical advances of the 20th century. He was the first to detect radio emissions from neutral galactic hydrogen, the famous 21 cm line due to hyperfine splitting. Measurements of the 21 cm line are still an important technique in modern astronomy.