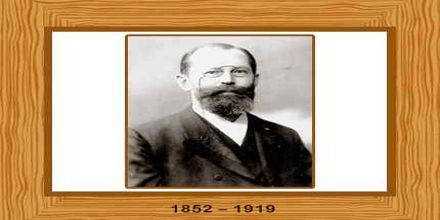 Known for: Study of sugars & purines

Emil Hermann Fischer, more commonly known as Emil Fischer, was an eminent German chemist. He received the 1902 Nobel Prize for Chemistry for his influential research regarding the purines and the carbohydrates.

His mentor Adolph von Baeyer developed Emil’s interest in organic chemistry and the latter went on to win a Nobel Prize for his contribution to the field. Though his very first discovery, a derivative of hydrazine was dismissed by many as a mere fluke, he silenced his critics with his further discoveries. The caffeine which is the main ingredient in beverages like coffee, was first discovered by this eminent chemist. He identified the class of compounds similar to caffeine and named them as purines. Born in Euskirchen near Bonn, Germany in 1852, Emil Fischer’s father, Lorenz Fischer, was a local businessman who wanted his son to become a chemist. Emil Fischer started attending the University at Bonn in 1871, where took the classes of Rudolf Clausius and August Kekule. In 1874, he received his doctorate from the University of Strasbourg under Adolph von Baeyer.

Louis was initially home tutored and later enrolled in school; he completed his schooling from the cities ofWetzlar and Bonn. After appearing for his final examinations in 1869, wherein he performed exceptionally, the bright mind wanted to pursue higher studies.

As the only living child of his parents he was expected to join the family business. But eventually his father agreed to let him pursue the study of natural sciences. Hence in 1871, Fischer was enrolled at the ‘University of Bonn’. Initially inclined to specialize in physics, he moved to the ‘University of Strasbourg’ in 1872, along with his cousin Otto Fischer; who would later become his research partner. At Strasbourg, his encounter with the director of chemical institute, Adolph von Baeyer sparked his lifelong interest in chemistry. Baeyer was credited with the discovery of phthalein dyes and Emil worked under him during his doctoral studies.

In 1874, he was awarded a Ph.D. in chemistry and his doctoral dissertation delved into study of organic compounds fluorescein and orcin-phthalein.

In 1874, he was offered the position of a research assistant at the ‘University of Strasbourg’. It was while working as an assistant in the organic chemistry laboratory under von Baeyer, that he discovered the first hydrazine derivative compound, phenylhydrazine. In 1875, following the discovery of phenylhydrazine, Emil accompanied von Baeyer to the ‘University of Munich’ as an assistant. Three years later he was conferred upon the title of Privatdozent, which allowed him to teach university level courses.

Fischer also assisted Baeyer in his research laboratory. He accompanied Baeyer to Munich in 1875, becoming a Privatdozent in 1878, and an assistant professor in 1879. Three years later, he assumed the position of Professor and Director of the Chemistry Institute at Erlangen in 1882. Fischer was also a successor to A. W. von Hofmann, as a director of the Chemistry Institute of Berlin.

In 1879, the ‘University of Munich’ offered him the position of Associate Professor of Analytical Chemistry. During his time at the university, he was devoted to the study of hydrazines. Along with Otto Fischer, the duo worked on demonstrating the constitution of chemical derivatives of triphenylmethane..

He continued his research work on purines and discovered that this family of bases even constituted the DNA. Fischer then embarked on a study of sugars and devised the ‘Fischer Projection’ method to depict their molecular structure on a 2-D surface such as paper. In continuation to his study of sugars, he studied the fermentation caused in sugar by enzymatic action. His ground-breaking work on organic compounds including purines and sugars earned him the Nobel Prize in the year 1902. This eminent chemist then embarked on the study of proteins and deduced that the amino acids in proteins are linked by what are known as “peptide bonds”. He chemically synthesised artificial protein by linking amino acids with the amide bonds to scientifically prove his inferences.

Emil Fischer was a renowned name in the world of chemistry and his work on the family of bases named purines, and sugars earned him a Nobel Prize. The ‘Fischer Projection’ method of representing the molecular structure of sugar was also devised by this eminent chemist.

Many names of chemical reactions and concepts are named after him:

The world-renowned chemist was honoured with a Nobel Prize in 1902 for his contribution to the world of organic chemistry.

He was also presented with the ‘Prussian Order of Merit’ and ‘Maximilian Order for Arts and Sciences’.

He was particularly happy at Würzburg where he enjoyed walks among the hills and he also made frequent visits to the Black Forest. His administrative work, especially when he went to Berlin, revealed him as a tenacious campaigner for the establishment of scientific foundations, not only in chemistry, but in other fields of work as well. His keen understanding of scientific problems, his intuition and love of truth and his insistence on experimental proof of hypotheses, marked him as one of the truly great scientists of all time.

In 1888 Fischer married Agnes Gerlach, daughter of J. von Gerlach, Professor of Anatomy at Erlangen. Unhappily his wife died seven years after their marriage. They had three sons, one of whom was killed in the First World War; another took his own life at the age of 25 as a result of compulsory military training. The third son, Hermann Otto Laurenz Fischer, who died in 1960, was Professor of Biochemistry in the University of California at Berkeley. On 15 July 1919, this eminent chemist ended his life by overdosing on phenylhydrazine.

He is the eponym of several chemical reactions and concepts including the ‘Fischer projection’, ‘Fischer oxazolesynthesis’ and ‘Fischer peptide synthesis’