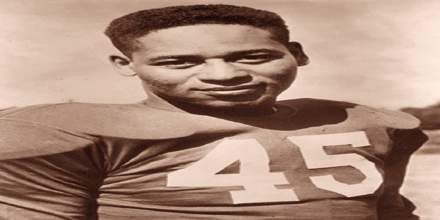 Emlen Lewis Tunnell was born on March 29, 1925, in Bryn Mawr, Pennsylvania. He played college ball before serving in the U.S. Coast Guard during World War II, later receiving honors for two major feats of heroism. He then spent 10 years with the New York Giants and three more years with the Green Bay Packers before retiring in 1962. After leaving the field, Tunnell served as a coach and scout for the Giants.Emlen Lewis Tunnell is widely known for becoming the first African American to be inducted into the Professional Football Hall of Fame in 1967.

He played in the National Football League for the Giants and Green Bay Packers. Tunnell played college football at the University of Iowa.

In 1999, Tunnell was ranked number 70 on The Sporting News’ list of 100 Greatest Football Players.

In 1943 Tunnell volunteered to serve in World War II. Though his injuries disqualified him from enlistment in the Army, Tunnell was able to serve on active duty with the United States Coast Guard. During his shore leaves he ignored medical advice and played football for the Fleet City Bluejackets of the Connecticut Football League.  His playing there earned him a scholarship from the University of Iowa. At the university Tunnell became a star running back and defensive back for the Hawkeyes, but missed his senior year due to an eye injury.

Again, Tunnell’s football career seemed over when he was ignored in the National Football League (NFL) draft.

Undeterred, he joined the U.S. Coast Guard, with Tunnell twice noted for his remarkable bravery. During a 1944 attack in Papua New Guinea and the resulting torpedo explosion, Tunnell saved a fellow seaman aboard the USS Etamin who was lit ablaze. Around two years later, Tunnell suffered from shock and hypothermia after jumping into frigid waters to rescue a shipmate who’d fallen from the Coast Guard Cutter Tampa.

Upon his retirement in 1961 Tunnell held the record for interceptions at 79, yards, gained on interceptions at 1,282, total punt returns with 258, and yards gained on punt returns with 2,209. Tunnell was selected to nine pro-bowls and, in 1951, when defensive players were allowed to be named All-NFL he was chosen for four consecutive seasons. After his career as a player ended in 1961, Tunnell served as assistant coach and scout for the Giants from 1962 to 1973. He then held the position of assistant director of pro personnel until the time of his death on July 22, 1975.

Tunnell first played for the University of Toledo where he suffered a neck injury that was so severe the US Army and US Navy both rejected his attempts to enlist during World War II.

He was eventually accepted by the US Coast Guard, and spent two years of service there before returning to play football for the University of Iowa He started at quarterback, halfback and on defense during his two years as a Hawkeye. He led the team in passing in the 1946 season and receiving during the 1947 season. He quit the team before the 1948 season in order to join the New York Giants.

In the summer of 1948 Tunnell hitchhiked 150 miles to the training camp of the New York Giants. With his size and quickness, the 6-foot-1-inch tall, 200-pound Tunnell impressed the Giants’ coaches.  The Giants offered him a contract, and Tunnell accepted the $5,000 one-year contract with $1000 in bonuses, becoming the first African American to play for the Giants two years after the color barrier was broken in the NFL. Tunnell was a key player in coach Steve Owen’s signature “umbrella” defense, and was the NFL’s top kick returner.

Despite multiple injuries, Tunnell played in 158 consecutive games for the Giants. Tunnell was nicknamed the Giants’ “offense on defense,” and he set records in return yards as well as interceptions. Tunnell helped the Giants win a National Championship in 1956 and an Eastern Division title in 1958.  In 1959 Tunnell reunited with his former assistant coach, Vince Lombardi, who was now the head coach of the Green Bay (Wisconsin) Packers.

Tunnell helped the Green Bay Packers win a Western Division Title in 1960, as well as a National Football League Championship in 1961.

Tunnell played 14 years in the National Football League. He played his first 11 years with the New York Giants and the last three years with the Green Bay Packers. Tunnell was a nine-time Pro Bowl selection.

After leaving the field at the end of the 1961 season, Tunnell remained close to the action. He joined the New York Giants as a scout, later becoming the first African American to be a full-time NFL assistant coach. He was specifically appointed defensive backs coach. He then held the position of assistant director of pro personnel until the time of his death on July 22, 1975.

He ended his career with a record 79 interceptions (since surpassed by Paul Krause), which he returned for 1,282 yards and 4 touchdowns, and 16 fumble recoveries, along with another 3,506 return yards and 6 touchdowns on special teams.

Emlen Lewis Tunnell was born to Elzie Tunnell and Catherine Adams Tunnell on March 29, 1925 in Bryn Mawr, Pennsylvania. Tunnell’s mother was a domestic worker who principally raised him and his three siblings. Tunnell grew up in Radnor, Pennsylvania, where he attended high school and played varsity football.

Tunnell had been married Patricia Dawkins since 1962, and the marriage lasted until his death.

Emlen Lewis Tunnell died of a heart attack on July 22, 1975, in Pleasantville, New York. He was survived by his wife Patricia Dawkins, whom he wed in 1962.

Emlen Lewis Tunnell was elected as the first African-American in the Pro Football Hall of Fame in 1967.

Today, he continues to be remembered for his athletic achievements and helping to break the color barrier in professional football. Decades later, in 2011, Tunnell was awarded the Coast Guard’s Silver Lifesaving Medal for his acts of heroism during the 1940s. His sister, Vivian Robinson, accepted the medal on his behalf.