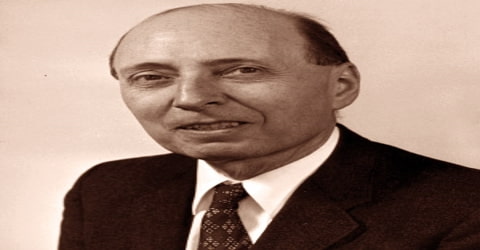 A Hungarian-born American physicist, joint winner, with J. Hans D. Jensen of West Germany and Maria Goeppert Mayer of the United States, of the Nobel Prize for Physics in 1963, Eugene Wigner was born in Budapest, Austria-Hungary on November 17, 1902, to middle class Jewish parents, Elisabeth (Einhorn) and Anthony Wigner, a leather tanner. He received the Nobel Prize “for his contributions to the theory of the atomic nucleus and the elementary particles, particularly through the discovery and application of fundamental symmetry principles”.

From the beginning of his career, Wigner had made many significant cross-disciplinary discoveries. He established the importance of symmetry principles in quantum mechanics and was one of the first scientists to apply quantum mechanics to the theory of solids and chemical kinetics. He also led the endeavor to design the first high-powered reactors to be used in World War II. He was responsible for the full development of the R-matrix theory for nuclear reactions. More than forty doctoral students studied theoretical physics under his supervision at Princeton University. As a statesman, he lobbied for civil defense. Later in life, he became inclined towards the philosophy of science. Wigner held memberships in different associations like the American Philosophical Society, the American Mathematical Society, the American Association of Physics Teachers, the Royal Netherlands Academy of Sciences and Letters, and the Austrian Academy of Sciences. He was also a corresponding member of the Gesellschaft der Wissenschaften, Gottingen, and a foreign member of the Royal Society of Great Britain. In his final years, he remained active in fostering cultural and scientific ties between Hungarians and the world.

In later life, Wigner became more philosophical and published The Unreasonable Effectiveness of Mathematics in the Natural Sciences, his best-known work outside technical mathematics and physics. Eugene Wigner, in full Eugene Paul Wigner, Hungarian Jenó Pál Wigner, was born on 17 November 1902 in an upper-middle-class family in Budapest, Hungary. His father, Antal Wigner, was a manager at a leather tanning factory and his mother, Erzsébet was a devoted housewife. He had two other siblings. Wigner was homeschooled by a professional teacher until the age of 9 when he started school in the third grade. During this period, Wigner developed an interest in mathematical problems. At the age of 11, Wigner contracted what his doctors believed to be tuberculosis. His parents sent him to live for six weeks in a sanatorium in the Austrian mountains before the doctors concluded that the diagnosis was mistaken.

From 1915 through 1919, he studied at the secondary grammar school called Fasori Evangélikus Gimnázium. Eugene’s peaceful childhood in Budapest was interrupted by World War I, and his family was forced to flee to Austria when Hungary was under communist rule for most of 1919. After graduating from the secondary school in 1920, Wigner enrolled at the Budapest University of Technical Sciences, known as the Műegyetem. He was not happy with the courses on offer, and in 1921 enrolled at the Technische Hochschule Berlin (now Technical University of Berlin), where he studied chemical engineering. He also attended the Wednesday afternoon colloquia of the German Physical Society. These colloquia featured such luminaries as Max Planck, Max von Laue, Rudolf Ladenburg, Werner Heisenberg, Walther Nernst, Wolfgang Pauli, and Albert Einstein. Wigner also met the physicist Leó Szilárd, who at once became Wigner’s closest friend. The third experience in Berlin was formative. Wigner worked at the Kaiser Wilhelm Institute for Physical Chemistry and Electrochemistry (now the Fritz Haber Institute), and there he met Michael Polanyi, who became, after László Rátz, Wigner’s greatest teacher. Polanyi supervised Wigner’s DSc thesis, Bildung und Zerfall von Molekülen (“Formation and Decay of Molecules”).

In 1925 Wigner obtained the degree of Dr. Ing. from the Technische Hochschule in Berlin under the supervision of Michael Polanyi.

Eugene Wigner met Amelia Frank, a physics student at the University of Wisconsin, and they got married in 1936. However, she died of cancer in 1937, leaving Wigner distraught.

On June 4, 1941, Wigner married his second wife, Mary Annette Wheeler, a professor of physics at Vassar College, who had completed her Ph.D. at Yale University in 1932. After the war, she taught physics on the faculty of Rutgers University’s Douglass College in New Jersey until her retirement in 1964. They remained married until her death in November 1977. They had two children, David Wigner, and Martha Wigner Upton

After the death of his second wife in 1977, Wigner married Eileen Clare-Patton (Pat) Hamilton, the widow of physicist Donald Ross Hamilton, in 1979. They had a daughter, Erika.

In 1992, at the age of 90, Eugene Wigner published his memoirs, The Recollections of Eugene P. Wigner with Andrew Szanton. In it, Wigner said: “The full meaning of life, the collective meaning of all human desires, is fundamentally a mystery beyond our grasp. As a young man, I chafed at this state of affairs. But by now I have made peace with it. I even feel a certain honor to be associated with such a mystery.” In his collection of essays Symmetries and Reflections – Scientific Essays (1995), he commented: “It was not possible to formulate the laws of quantum mechanics in a fully consistent way without reference to consciousness.” Eugene Wigner studied chemical engineering and received a Ph.D. from the Institute of Technology in Berlin in 1925. After serving as a lecturer there and at the University of Göttingen, he went to the United States. Apart from two years (1936-38) as professor of physics at the University of Wisconsin, he spent his academic life at Princeton University, serving as a professor of mathematical physics from 1938 until his retirement in 1971. He became a naturalized U.S. citizen in 1937.

In 1926 Wigner accepted an offer from Karl Weissenberg at the Kaiser Wilhelm Institute in Berlin to work on x-ray crystallography. After assisting Weissenberg for six months, he worked for Richard Becker for two semesters.

In 1927 Becker, in turn, suggested that Wigner works with David Hilbert, a highly distinguished mathematician at the University of Göttingen. Hilbert became ill and retreated from professional work, leaving Wigner without formal responsibilities. Wigner’s time in Göttingen was hardly unproductive, however. He formed friendly ties with James Franck and collaborated with Victor Weisskopf, who was then a student, on a paper on spectral line shape. Wigner returned to Berlin in 1928 to work on his book, which was published in 1931, and continue his research. In addition, at the suggestion of Szilard, Wigner began a book, Group Theory and Its Application to Quantum Mechanics (1931), which became famous. By the time he left Göttingen, Wigner had firmly launched a career in science. Not only had he begun the book that would make his name, but he had started the line of research that would later lead to the Nobel Prize.

In the late 1930s, Wigner extended his research into atomic nuclei. By 1929, his papers were drawing notice in the world of physics. In 1930, Princeton University recruited Wigner for a one-year lectureship, at 7 times the salary that he had been drawing in Europe. Princeton recruited von Neumann at the same time. Jenő Pál Wigner and János von Neumann had collaborated on three papers together in 1928 and two in 1929. They anglicized their first names to “Eugene” and “John”, respectively. When their year was up, Princeton offered a five-year contract as visiting professors for half the year. The Technische Hochschule responded with a teaching assignment for the other half of the year. This was very timely since the Nazis soon rose to power in Germany.

At Göttingen, Wigner formulated his law of the conservation of parity, which implies that it is impossible to distinguish left from right in fundamental physical interactions. This theory became an integral part of quantum mechanics, but in 1956 the physicists Tsung-Dao Lee and Chen Ning Yang showed that parity is not always conserved in weak interactions of subatomic particles. At Princeton, Wigner determined that the nuclear force that binds neutrons and protons together is necessarily short-range and independent of an electric charge. He also developed the principles involved in applying mathematical group theory to investigate the energy levels of atomic nuclei. In 1936 he worked out the theory of neutron absorption, which later proved useful in building nuclear reactors.

After the Nazis rose to power, his term at Berlin ended and from 1936 to 1938, Wigner served as a lecturer at Princeton. He was appointed to Thomas D Jones Chair of Mathematical Physics at Princeton in 1938. Wigner also made important contributions to the development of relativistic quantum mechanics. In a 1939 paper, “On Unitary Representations of the Inhomogeneous Lorentz Group,” he set his sights on the homogeneous Lorentz group, a group involving time-dependent symmetries (or symmetry groups) that also include time-translation invariance. In his analysis of its irreducible representations, he was able to provide a complete classification of all the elementary particles that were then known. From 1942 to 1945, he worked on the Manhattan Project at the University of Chicago. He led a team that designed nuclear reactors that would convert uranium into plutonium.

In 1946, Eugene Wigner became the Co-director of Research and Development at the Clinton Laboratory in Oak Ridge, Tennessee. After the end of World War II, he served on several government bodies, such as the National Bureau of Standards (1947-1951), the mathematics panel of the National Research Council (1951-1954), and the General Advisory Committee of the Atomic Energy Commission (1952-1957; 1959-1964). During World War II, Wigner worked at the Metallurgical Laboratory at the University of Chicago, where he helped Enrico Fermi construct the first atomic pile. Wigner also conducted research on quantum mechanics, the theory of the rates of chemical reactions, and nuclear structure. His publications include Gruppentheorie und Ihre Anwendung auf die Quantenmechanik der Atomspektren (1931; Group Theory and Its Application to the Quantum Mechanics of Atomic Spectra), a classic text, and Symmetries and Reflections (1967).

During his last years, Wigner’s thoughts turned philosophical and in 1960, he published an article on the philosophy of mathematics and physics, ‘The Unreasonable Effectiveness of Mathematics in the Natural Sciences’.

Eugene Wigner was awarded the Nobel Prize in Physics in 1963 “for his contributions to the theory of the atomic nucleus and the elementary particles, particularly through the discovery and application of fundamental symmetry principles”.

Eugene Wigner died of pneumonia at the University Medical Center in Princeton, New Jersey on 1 January 1995. He was survived by his wife Eileen (died 2010) and children Erika, David and Martha, and his sisters Bertha and Margit.

His most important work was his formulation of the law of the conservation of parity, an integral part of quantum mechanics. It states that it is not possible to differentiate left from right in fundamental physical interactions. While working on the Manhattan Project, he discovered the swelling of the graphite moderator by neutron radiation; a phenomenon now termed as ‘Wigner effect’.