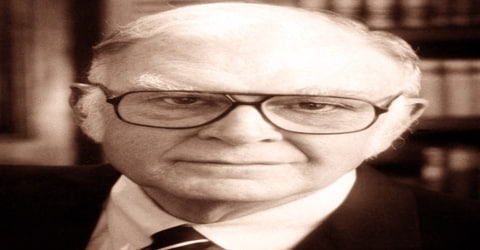 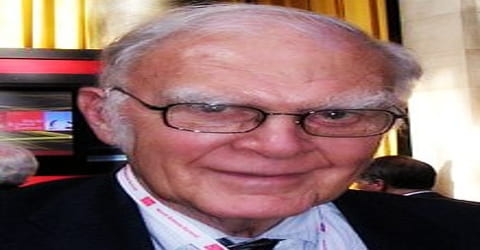 A Nobel Prize-winning American Nobel laureate and chemist, Frank Sherwood Rowland was born on 28th June 1927, in Delaware, Ohio, the U.S. He shared the 1995 Nobel Prize for Chemistry with chemists Mario Molina and Paul Crutzen for research on the depletion of the Earth’s ozone layer. Working with Molina, Rowland discovered that man-made chlorofluorocarbon (CFC) propellants accelerate the decomposition of the ozonosphere, which protects the Earth from ultraviolet radiation. Their findings eventually brought about international changes in the chemical industry.

Born in the late 1920s in Delaware, Rowland had his education, first at Ohio Wesleyan University and then at the University of Chicago. Thereafter, he began his career at Princeton University as Instructor of Chemistry, shifting from there to the University of Kansas and then to the University of California, where he remained for the rest of his life. It was here at California that he undertook his Nobel Prize-winning work on chlorofluorocarbons, which was then being regularly used in air conditioners, refrigerators, and aerosol sprays. Working with Mario Molina, he established that such use had a dangerous consequence on the stratospheric ozone layer, making holes in it. Not satisfied with merely establishing the fact, he raised his voice against regular use of CFC and became instrumental in banning it first in the USA and later all over the world. The 1987 Montreal protocol was actually the result of his tireless crusade against the use of chlorofluorocarbons.

Rowland’s research was on atmospheric chemistry and chemical kinetics. His best-known work was the discovery that chlorofluorocarbons contribute to ozone depletion. 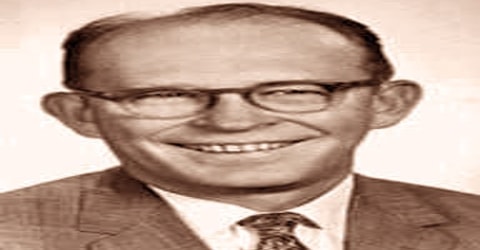 F. Sherwood Rowland, in full Frank Sherwood “Sherry” Rowland, was born on 28th June 1927, in Delaware, Ohio, U.S. His father, Sydney A. Rowland, was a Professor of Mathematics and the Chairman of the Department at the Ohio Wesleyan University. His mother, Margaret Drake Rowland, taught Latin. He was the second of his parents’ three children.

Rowland attended public school in Ohio and got his education. As he showed extreme talent and intelligence, and the system allowed it, he received his high school graduation diploma before the age of 16. Then he entered Ohio Wesleyan University. Because he was not yet eighteen, he could not be enlisted for the military service and so he was few of the male students left in the university.

Rowland joined the US Navy to get trained as a radar operator, in 1945. The World War II ended in the same year while he was still a trainee. However, he had to wait for fourteen months before he was released from the Navy. Thereafter, he hitched back to Ohio across a distance of 2000 miles from San Pedro, California, where he was transferred before release. He then spent two more years, completing his undergraduate studies, majoring in physics, chemistry, and mathematics.

Frank Sherwood Rowland met Joan Lundberg while studying at the University of Chicago; she was a student of the same university. They got married on June 7, 1952, and had two children, a daughter named Ingrid and a son named Jeffery. 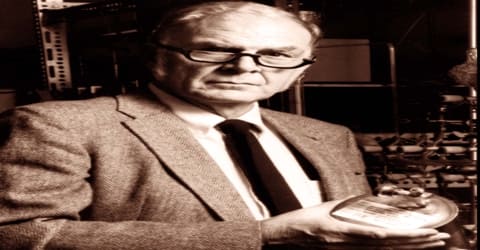 Frank Sherwood Rowland received a master’s degree in 1951, followed by a Ph.D. a year later, in 1952. All of those degrees Rowland received in the University of Chicago. He was teaching for four years at Princeton University, from 1952 to 1956. Later he transferred to the University of Kansas, where he stayed for longer, from 1956 to 1964. He then became a professor in the field of chemistry at the University of California in 1964. Concurrently, Rowland spent the summers of 1953, 1954 and 1955 working at the Chemistry Department of the Brookhaven National Laboratory.

Rowland put a powdered mixture of the sugar glucose and lithium carbonate into the neutron flux of the nuclear reactor, at working in Brookhaven. It resulted in the one-step synthesis of radioactive tritium-labeled glucose. This work was noted by the United States Atomic Energy Commission (AEC) and it offered support for the continuation of the research. However, before anything could materialize, he received an appointment as an Assistant Professor at the University of Kansas and joined his new post in the summer of 1956. The support promised by AEC also arrived on time. He, therefore, lost no time in gathering a research team, comprising of graduate student and postdoctoral fellows. For the next eight years, he worked with this research group, investigating mainly the chemical reactions of energetic tritium atoms.

Rowland moved to Irvin to become Professor of Chemistry and also the first Chairman of the Chemistry Department of the yet-to-be-opened the University of California, in August 1964. In spite of the transfer, he continued receiving support from AEC. Students began to arrive by September 1965. Here too he gathered an effective research team and continued his work on ‘hot atom’ chemistry. At the same time, Rowland deliberately sought new topics, trying to instill some freshness in the research work. Thus they first worked on radioactive tracer photochemistry, using tritium and carbon-14; then chlorine and fluorine chemistry using the radioactive isotopes 38Cl and 18F.

Rowland began working with Mario J. Molina, at Irvine in the early 1970s. He was elected to the National Academy of Sciences in 1978 and served as a president of the American Association for the Advancement of Science (AAAS) in 1993. His best-known work was the discovery that chlorofluorocarbons contribute to ozone depletion. Rowland theorized that man-made organic compound gases combine with solar radiation and decompose in the stratosphere, releasing atoms of chlorine and chlorine monoxide that are individually able to destroy large numbers of ozone molecules. It was obvious that Frank had a good idea of what was occurring at higher altitudes when he stated “…I knew that such a molecule could not remain inert in the atmosphere forever, if only because solar photochemistry at high altitudes would break it down”.

Rowland and Molina’s research, first published in Nature magazine in 1974, initiated a federal investigation of the problem. The National Academy of Sciences concurred with their findings in 1976, and in 1978 CFC-based aerosols was banned in the United States. Further validation of their work came in the mid-1980s with the discovery of the so-called hole in the ozone shield over Antarctica. In 1987 an international protocol to ban the production of ozone-depleting gases was negotiated by the United Nations in Montreal.

Rowland traveled to Salzburg, Austria to attend an International Atomic Energy Agency meeting on the environmental applications of radioactivity and had much close interactions with specialists in the field, in 1970. In January 1972, he attended another such meeting held in Fort Lauderdale, Florida. It was here that Rowland first learned about the traces of chlorofluorocarbon (a man-made chemical) found in the atmosphere both at the northern and southern hemisphere.

Rowland is best known for his extensive research in radiochemistry. He was the one who discovered chlorofluorocarbons contributing to ozone depletion. He announced after his discovery that industrially developed gases influenced by solar radiation were decomposing in the stratosphere. This action then released vast amounts of chlorine, chlorine monoxide in the stratosphere. The release of chlorine and its monoxide in quantities that destroy ozone. His research paper first saw daylight in 1974, when it was published in the journal “Nature.” This research had the first real impact in 1978. That year a ban was issued towards the CFC-based aerosols in spray cans. This ban was firstly carried out in the US. It was not until 1980 when a global ban was issued.

Rowland performed many measurements of the atmosphere. One experiment included collecting air samples at various cities and locations around the globe to determine CCl3F North-South mixing. By measuring the concentrations at different latitudes, Rowland was able to see that CCl3F was mixing between hemispheres quite rapidly. The same measurement was repeated 8 years later and the results showed a steady increase in CCl3F concentrations.

Another very valuable research by Rowland was about the density of the ozone layer. He discovered that the ozone layer density increased in November, and slowly decreased until April. From April to November it stayed the same density without changes. Even though this phenomenon was real throughout the years, he noticed an overall decrease in the density of ozone.

While working with Don Blake, Rowland found that the concentration of methane, a greenhouse gas, was rising alarmingly in the atmosphere, in 1982. The findings attracted wide attention and resulted in the 1987 Montreal Protocol, which put in a blanket ban on the production of CFC and other ozone-depleting chemicals. Nonetheless, he continued his work. Just a few months before his death, he started novel research. With Blake, he began measuring chemicals in human breath. His idea was to see if it could provide a new avenue for diagnosing diseases. Rowland and his colleagues presented this research to the authorities, and this conclusion was able to lower the CFC emissions after several regulations were set slowly. The amount of CFC emission was regulated first in Canada, then afterward other countries followed. It reached a global impact in 1989 when the Vienna Agreement and the Montreal Protocol were developed.

In 1978, Rowland was elected to the National Academy of Sciences. Next, in 1993, he became the president of the American Association for the Advancement of Science (AAAS).

In 1995, Frank Sherwood Rowland and Morley were jointly awarded the Nobel Prize in Chemistry for their work on chlorofluorocarbon compounds and their role in ozone depletion. They shared the prize with Paul J. Cruzen, who independently worked on ozone depletion.

Rowland was elected a Foreign Member of the Royal Society (ForMemRS) in 2004.

After suffering from a short bout of ill health, Frank Sherwood Rowland died on 10th March 2012, of complications from Parkinson’s disease.

Frank Sherwood Rowland is best known for his work on chlorofluorocarbon compounds and their effects on the atmosphere. He along with Mario Molina showed that when CFC rises into the stratosphere, it is bombarded by powerful doses of ultraviolet rays, in 1974. As a result, the gas splits into chorine and chlorine monoxide. On further research, they found that a single chlorine atom can absorb more than 100,000 ozone molecules; thus depleting the ozone layer. What is more, these atoms could linger in the stratosphere for up to a century and continue absorbing more ozone molecules.