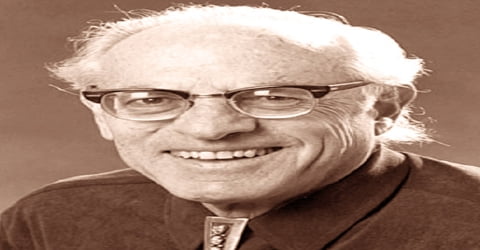 An American physicist who was awarded the 1995 Nobel Prize for Physics for his discovery 40 years earlier, together with his colleague Clyde L. Cowan, Jr., of the subatomic particle called the neutrino, a tiny lepton with little or no mass and a neutral charge, Frederick Reines was born on March 16, 1918, in Paterson, New Jersey, one of four children of Gussie (Cohen) and Israel Reines. Reines shared the Nobel Prize with physicist Martin Lewis Perl, who also discovered a fundamental particle, the tau. He may be the only scientist in history “so intimately associated with the discovery of an elementary particle and the subsequent thorough investigation of its fundamental properties”.

A graduate of the Stevens Institute of Technology and New York University, Reines joined the Manhattan Project’s Los Alamos Laboratory in 1944, working in the Theoretical Division in Richard Feynman’s group. He became a group leader there in 1946. He participated in a number of nuclear tests, culminating in his becoming the director of the Operation Greenhouse test series in the Pacific in 1951.

It was in the early 1950s that Reines and Cowan first developed the equipment and techniques with which they detected neutrinos which were at that time considered undetectable. Their findings proved to be very significant to international research in the field and ultimately culminated in Reines’s winning the coveted Nobel Prize. Born in the United States to Jewish emigrants from Russia, he received a typical middle-class upbringing. He had three elder siblings who were very studious and influenced their youngest brother to perform well in school. During his senior year at high school, he became deeply interested in science and decided to become a physicist. He went on to attend Stevens Institute of Technology in Hoboken, New Jersey, from where he earned a degree in mechanical engineering. After completing his masters and receiving his doctorate, he began working in the Theoretical Division at the Manhattan Project’s Los Alamos Laboratory. His collaborative work with Clyde Cowan over the course of his career led to many important discoveries in the field of neutrino research which eventually earned Reines a share of the Nobel Prize. An American physicist, Frederick Reines (/ˈraɪnɛs/ RY-nes), was born on March 16, 1918, in Paterson, New Jersey, the U.S. to Gussie (Cohen) and Israel Reines, Jewish emigrants from the same town in Russia. He had three elder siblings. The family moved to Hillburn, New York, where his father ran the general store, and he spent much of his childhood. He was an Eagle Scout. Looking back, Reines said: “My early childhood memories center around this typical American country store and life in a small American town, including Independence Day July celebrations marked by fireworks and patriotic music, played from a pavilion bandstand.”

Reines sang in a chorus, and as a soloist. For a time he considered the possibility of a singing career and was instructed by a vocal coach from the Metropolitan Opera who provided lessons for free because the family did not have the money for them. The family later moved to North Bergen, New Jersey, residing on Kennedy Boulevard and 57th Street. Because North Bergen did not have a high school, he attended Union Hill High School in Union Hill, New Jersey (today Union City, New Jersey), from which he graduated in 1935.

Reines was educated at Stevens Institute of Technology, Hoboken, N.J. (B.S., 1939; M.A., 1941), and at New York University (Ph.D., 1944). From 1944 to 1959 he conducted research in particle physics and nuclear weaponry at the Los Alamos National Laboratory in New Mexico; in 1951 he oversaw experiments designed for the testing of nuclear weapons in the Marshall Islands. Following the completion of his Ph.D. program, Frederick Reines joined the Manhattan Project in the Theoretical Division of the Los Alamos Scientific Laboratory. He continued in the weapons testing program after the end of World War II. This work took him to Eniwetok Atoll, as director of the Operation Greenhouse experiments and included research on the effects of nuclear blasts at that location and at the Bikini and Nevada test sites.

Reines joined Feynman’s T-4 (Diffusion Problems) Group, which was part of Hans Bethe’s T (Theoretical) Division. Diffusion was an important aspect of critical mass calculations. In June 1946, he became a group leader, heading the T-1 (Theory of Dragon) Group. An outgrowth of the “tickling the Dragon’s tail” experiment, the Dragon was a machine that could attain a critical state for short bursts of time, which could be used as a research tool or power source.

His time at the laboratory was highly productive and he received the chance to work with some truly brilliant minds. Soon he was made a Group Leader in the Theoretical Division and was given the responsibility of overseeing experiments designed for the testing of nuclear weapons in the Marshall Islands in 1951. In 1958, he was a delegate to the Atoms for Peace conference in Geneva.

Reines participated in a number of nuclear tests and writing reports on their results. These included Operation Crossroads at Bikini Atoll in 1946, Operation Sandstone at Eniwetok Atoll in 1948, and Operation Ranger and Operation Buster-Jangle at the Nevada Test Site. In 1951 he was the director of Operation Greenhouse series of nuclear tests in the Pacific. This saw the first American tests of boosted fission weapons, an important step towards thermonuclear weapons. He studied the effects of nuclear blasts, and co-authored a paper with John von Neumann on Mach stem formation, an important aspect of an air blast wave.

In the 1950s, he formed a productive collaboration with Clyde L. Cowan and the two men performed the Cowan-Reines neutrino experiment through which the existence of the antineutrino a neutrally charged subatomic particle with very low mass was confirmed. Starting from the mid-1950s, Reines focused most of his efforts on the study of the neutrino’s properties and interactions. His neutrino research opened up newer job avenues for him and he was made the head of the physics department of Case Western Reserve University from 1959 to 1966. There he continued his neutrino research and led a group that was the first to detect neutrinos created in the atmosphere by cosmic rays.

The neutrino was first postulated in the 1930s by Wolfgang Pauli and later named by Enrico Fermi, but because of its minuscule size, it eluded detection for many years. In the early 1950s, Reines and Cowan set out to detect the particle, first at the Hanford Engineer Works in Richland, Wash., and then at the Savannah River laboratories in South Carolina. In their experiment, a nuclear reactor emitted neutrinos into a 400-liter (105-gallon) preparation of water and cadmium chloride. When a neutrino collided with a hydrogen nucleus (i.e., a proton), the interaction created a positron and a neutron. The positron was slowed by the liquid solution and destroyed by an electron, creating photons that were recorded by scintillation detectors. The neutron was likewise slowed and destroyed by a cadmium nucleus, creating photons that were recorded microseconds after the first set of photons. The separate recordings of the two impacts, therefore, gave proof of the existence of the neutrino. Reines subsequently built other neutrino detectors underground and helped pioneer the field of neutrino astronomy.

In 1959, Reines left Los Alamos to become professor and head of the Physics Department at Case Institute of Technology in Cleveland, Ohio, where he undertook new neutrino research while continuing work previously begun at Los Alamos. Fission reactors continued to be an important tool in this work. For example, a twenty-year effort using reactor neutrinos to observe the direct elastic-scattering of neutrinos by electrons finally was brought to a culmination in 1976 with the successful measurement of the tiny cross section for this reaction. In other reactor experiments that began at Los Alamos and bridged his time at Case, Reines and his coworkers observed both the “charged current” and the “neutral current” interactions of neutrinos with deuterons, completing these measurements in 1969 and 1979, respectively. The first studies of neutrino stability and of neutrino oscillations also employed reactor neutrinos.

In 1966, Reines took most of his neutrino research team with him when he left for the new University of California, Irvine (UCI), becoming its first dean of physical sciences. At UCI, Reines extended the research interests of some of his graduate students into the development of medical radiation detectors, such as for measuring total radiation delivered to the whole human body in radiation therapy.

While at Irvine Reines served as spokesman for the Irvine Michigan Brookhaven (IMB) collaboration which operated a Cerenkov detector containing 8,000 tons of water in the aforementioned salt mine beginning in 1982. The primary motivation for this effort was to extend the measured lower limit on the lifetime of the proton. This experiment ran until 1991 without observing a proton decay. The lower limits determined for lifetimes of several proton decay channels provided a significant test of particle theories. In addition, this detector, along with a similar detector in Kamiokande, Japan, detected a burst of neutrinos from the supernova 1987A, confirming the role of neutrinos in stellar collapse. Reines had prepared for the possibility of measuring the distant events of a supernova explosion. Supernova explosions are rare, but Reines thought he might be lucky enough to see one in his lifetime and be able to catch the neutrinos streaming from it in his specially-designed detectors. During his wait for a supernova to explode, he put signs on some of his large neutrino detectors, calling them “Supernova Early Warning Systems”. In 1987, neutrinos emitted from Supernova SN1987A were detected by the Irvine-Michigan-Brookhaven (IMB) Collaboration, which used an 8,000-ton Cherenkov detector located in a salt mine near Cleveland. Normally, the detectors recorded only a few background events each day. The supernova registered 19 events in just ten seconds. This discovery is regarded as inaugurating the field of neutrino astronomy.

Reines retired from UCI in 1988 but he continued teaching until 1991 and remained on UCI’s faculty for the rest of his life.

Frederick Reines received one half of the Nobel Prize in Physics 1995 “for the detection of the neutrino” while the other half went to Martin L. Perl “for the discovery of the tau lepton.”

Reines also received many other awards, including the J. Robert Oppenheimer Memorial Prize in 1981, the National Medal of Science in 1985, the Bruno Rossi Prize in 1989, the Michelson-Morley Award in 1990, the Panofsky Prize in 1992, and the Franklin Medal in 1992.

Frederick Reines died after a long illness at the University of California, Irvine Medical Center in Orange, California, on August 26, 1998. He was survived by his wife and children. His papers are in the UCI Libraries. Reines Hall at UCI was named in his honor.

Frederick Reines achieved international fame for his co-detection of the neutrino with Clyde Cowan in the neutrino experiment. He dedicated the major part of his career to the study of the neutrino’s properties and interactions, and his works helped to lay the foundation for the further development of neutrino research in the decades to come.