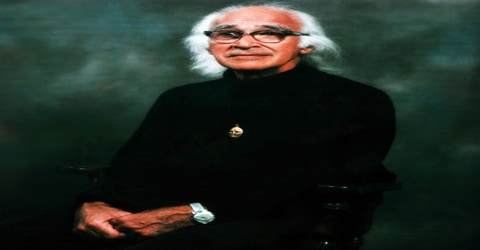 An American biochemist who received (with Haldan K. Hartline of the United States and Ragnar Granit of Sweden) the Nobel Prize for Physiology or Medicine in 1967 for his work on the chemistry of vision, George Wald was born on November 18, 1906, in New York City, New York, U.S. the son of Ernestine (Rosenmann) and Isaac Wald, Jewish immigrant parents. Wald explained the chemistry of the eye, describing the chemical reactions in our retinas when they are exposed to light. He discovered the chemical cycle centered on vitamin A that allows our eyes to record light. He also established the chemistry of color vision and color blindness.

After receiving the prize, Wald drifted away from scientific research, becoming a leading campaigner against the political establishment. He objected to nuclear weapons and to America’s participation in the Vietnam War. Wald featured in President Nixon’s ‘political enemies’ list.

Wald dedicated his life researching on how the eye sees and passes visual images to the brain. His work with pigments in the retina earned him rave reviews from fellow researchers and people across the scientific fraternity. Using chemical methods, he extracted pigments from the retina and later measured light absorbance of the pigments. Apart from scientific discoveries and research, Wald enjoyed a steady academic career. He started his career at Harvard as a tutor and later progressed to serve as Faculty Instructor, Associate Professor and finally Professor of Biology. In his lifetime, Wald received numerous awards and honors for his research work from various institutions across the globe. He also held membership in numerous scientific academies. An American scientist, George Wald was born on November 18, 1906, in New York City, New York, U.S. to Ernestine Rosenmann Wald and Isaac Wald. His father was a tailor who came to America from Poland. His mother was born in Germany. Both were Jewish. George was the third of their three children; he had an older sister, Gertrude, and an older brother, Louis.

From an early age, Wald’s mind was conspicuously strong, but his sporting ability was weak, he always regretted this, but could not change it. With the help of his young friend and neighbor Freddy Fisher, George began doing basic electrical experiments.

Young Wald gained his primary and secondary education from schools in Brooklyn. He later enrolled at the Brooklyn Technical High School in New York from where he graduated in 1922. Wald gained admission at the Washington Square College at New York University. He received his Bachelor of Science degree from New York University in 1927 and his Ph.D. in zoology from Columbia University in 1932. During his doctorate studies, Wald served as the student and research assistant of Professor Selig Hecht.

George Wald’s first marriage was to Frances Kingsley in 1931. With Frances, Wald had two sons, Michael and David. After 27 years of marriage, the couple divorced in 1958.

In the same year (1958), Wald married Ruth Hubbard, an associate in his research team, with whom he again had two children: Elijah and Deborah. Upon completing his doctorate degree, George Wald received a travel grant from the US National Research Council. Making most of the opportunity, he traveled to Germany to work under the supervision of Otto Heinrich Warburg. Together with Warburg, Wald identified the presence of vitamin A in the retina. Meanwhile, vitamin A then had just been isolated by the scientist, Paul Karrer, in Zurich, Switzerland. Wald traveled to Zurich to complete the identification at Karrer’s laboratory.

In 1932, age 26, Wald traveled to Berlin, Germany to work in Otto Warburg’s laboratory. Warburg specialized in studying biologically active molecules. A year earlier he had received the Nobel Prize in Physiology or Medicine for discovering the respiratory enzyme and how it acts. It was in Warburg’s laboratory that Wald made his first big discovery. Using spectroscopy he discovered that the retina contains vitamin A (sometimes called retinol). Wald knew that vitamin A deficiency was linked to poor night vision, so he was excited about his discovery. Moreover, he discovered a new chemical closely related to vitamin A that also takes part in the vision. This chemical is now called retinal.

While studying in Berlin as a National Research Council fellow (1932-33), Wald discovered that vitamin A is a vital ingredient of the pigments in the retina and, hence, important in maintaining vision. After further research in Heidelberg and at the universities of Zürich and Chicago, he joined the faculty of Harvard University in 1934.

From 1935, Wald served as an instructor and tutor in Biology, later taking up the post of a Faculty Instructor from 1939 to 1944, Associate Professor from 1944 to 1948 and finally Professor of Biology from 1948. Meanwhile, in the summer term of 1956, Wald served as the Visiting Professor of Biochemistry at the University of California. At Harvard University, Wald indulged in studies that showed how vitamin A improved vision. He also studied how cells in the retina perceive color, black and white, and passed images to the brain. Through his research and experiments, Wald discovered that Vitamin A was a component of the retina. He also showed that when pigment rhodopsin was exposed to light, it yielded the protein opsin and a compound containing vitamin A. This suggested that vitamin A was essential in retinal function.

Wald spoke out on many political and social issues and his fame as a Nobel laureate brought national and international attention to his views. He was a vocal opponent of the Vietnam War and the nuclear arms race. Speaking at MIT in 1969 Wald bemoaned that “Our government has become preoccupied with death, with the business of killing and being killed.” In 1980, Wald served as part of Ramsey Clark’s delegation to Iran during the Iran hostage crisis.

By the early 1950s, Wald had succeeded in elucidating the chemical reactions involved in the vision process of the rods (receptors on the retina used for night vision). In the late 1950s, with Paul K. Brown, he identified the pigments in the retina that are sensitive to yellow-green light and red light and in the early 1960s the pigment sensitive to blue light. Wald and Brown also discovered the role of vitamin A in forming the three color pigments and showed that color blindness is caused simply by the absence of one of them. Wald became professor emeritus at Harvard in 1977. Leaving Harvard in 1977, Wald lectured and traveled widely in the interest of peace and human rights.

Wald’s early brilliance as a communicator led his parents to suggest he should become an attorney. In fact, his skills made him an inspiring and highly acclaimed teacher. In May 1966, Time Magazine featured him as one of America’s 10 greatest college teachers. His introduction to biology course The Nature of Living Things became a legend at Harvard. Delivered by a renowned Nobel Prize winner, it was taken by many beginning students as their only science course. Wald’s enthusiasm and eloquence converted more than a few art students to become biology majors.

In 1980, Wald traveled to Iran during the hostage crisis, though he was forbidden to do so. In 1986, along with other Nobel laureates he was invited to fly to Moscow to advise Mikhail Gorbachev on environmental questions. Upon meeting Gorbahev, Wald fearlessly asked the former about the arrest, detention, and exile of Yelena Bonner and her husband, fellow Nobel laureate Andrei Sakharov. Interestingly, Gorbachev knew nothing about it and acted upon it almost immediately, releasing Bonner and Sakharov, in December 1986. In 1965, Wald was one of a number of people who signed a letter opposing American involvement in the Vietnam War. After winning the 1967 Nobel Prize, he knew his opinions would be more widely reported. He angered some of his fellow scientists when, at a US Embassy dinner in honor of American Nobel Prize winners, he made an anti-Vietnam War speech.

In 1967, George Wald, Ragnar Granit, and Haldan Keffer Hartline were jointly awarded the Nobel Prize in Physiology or Medicine “for their discoveries concerning the primary physiological and chemical visual processes in the eye”.

Wald was conferred with the Eli Lilly Award for Fundamental Research in Biochemistry from the American Chemical Society in 1939. In 1953, he was honored with the Lasker Award of the American Public Health Association for his outstanding discoveries in biochemistry.

In 1955, Wald received the Proctor Medal of the Association for Research in Ophthalmology. In 1959, he was bestowed with the Rumford Medal by the American Academy of Arts and Sciences.

In 1966, George Wald won the Ives Medal of the Optical Society of America. In 1967, he jointly received the Paul Karrer Medal by the University of Zurich with his wife, Ruth Hubbard.

George Wald died at age 90 of natural causes on April 12, 1997, in Cambridge, Massachusetts.

George Wald is known for his work on the physiology of the eye. His studies showed how vitamin A improved vision and how cells in the retina perceived colors and passed images to the brain. Through his experiments, he discovered that Vitamin A was a component of the retina. It was yielded when the pigment rhodopsin was exposed to light along with protein opsin. As such, he proved that vitamin A was essential in retinal function.