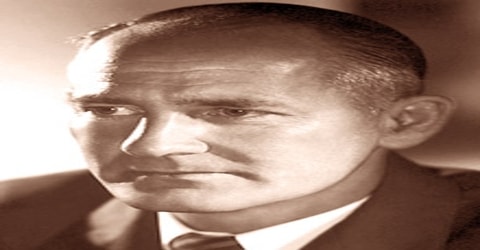 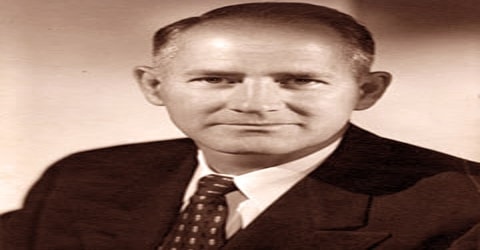 An American geneticist who helped found biochemical genetics when he showed that genes affect heredity by determining enzyme structure, George Wells Beadle was born on October 22, 1903, near Wahoo, Nebraska, the U.S. In 1958 he shared one-half of the Nobel Prize in Physiology or Medicine with Edward Tatum for their discovery of the role of genes in regulating biochemical events within cells.

Beadle and Tatum’s key experiments involved exposing the bread mold Neurospora crassa to x-rays, causing mutations. In a series of experiments, they showed that these mutations caused changes in specific enzymes involved in metabolic pathways. These experiments led them to propose a direct link between genes and enzymatic reactions, known as the One gene-one enzyme hypothesis.

Born in Nebraska, United States, his father was a well-to-do farmer and it was expected that he would follow his footstep once he finishes his schooling. However, urged by his science teacher he first joined College of Agriculture under the University of Nebraska for his bachelor’s degree and then went on to earn his M.S. and a Ph.D. degree from the University of Cornell. Afterward, he received a fellowship and did his postdoctoral from Caltech. However, his major work, for which he received the Nobel Prize, was done at the University of Stanford. Here he worked with Edward Tatum on Neurospora crassa. They found that the structure of a specific enzyme was determined by a specific gene and that each enzyme allowed a single chemical reaction to proceed. The concept is known as ‘one gene-one enzyme hypothesis’. Later, he shifted back to Caltech and as Chairman of its Biology Division, he turned it into a center of excellence. He continued his research even after he retired and proved that genetically there is little difference between Teosinte and maize. However, owing to Alzheimer’s disease his last days were spent divorced from reality. 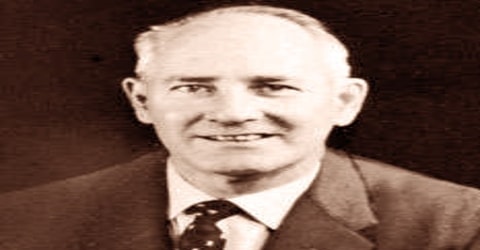 George Beadle, in full George Wells Beadle, was born on October 22, 1903, in Wahoo, Nebraska, the U.S. His father, Chauncey Elmer Beadle, was a well-to-do farmer with forty acres of land. He was also highly enterprising, hardworking and independent. His mother, Hattie Albro Beadle, died in 1908 when George was only five years old. George Wells Beadle, lovingly called Beets, had an elder brother and a younger sister. Unfortunately, his elder brother too died in 1913 and so it fell upon ten-year-old Beadle to look after her younger sister and help his father at the farm in whatever way he could.

George was educated at the Wahoo High School and might himself have become a farmer if one of his teachers at school had not directed his mind towards science and persuaded him to go to the College of Agriculture in Lincoln, Nebraska. In 1926 he took his Bachelor of Science degree at the University of Nebraska and subsequently worked for a year with Professor F.D. Keim, who was studying hybrid wheat.

Subsequently, he joined the Department of Plant Breeding at the College of Agriculture under the University of Cornell and earned his M. Sc. degree from there in 1927. Here, he worked on sterile mutants of maize and showed that mutants can affect the formation of the sex cells, egg, and pollen. This work, published in fourteen papers, formed the basis for his doctoral thesis. His Ph.D. paper was titled ‘Genetical and Cytological Studies of Mendelian Asynapsis in Zea mays’ and he received the degree in 1930.

In 1928, George Wells Beadle met Marion Hill, who was then doing her MS in botany at the University of Cornell. They married in the same year and their son David was born in December 1931. However, trouble began once they returned to Caltech in 1946. Finally, they divorced in the summer of 1953.

His second wife, Muriel McClure (1915-1994), a well-known writer, was born in California. Beadle’s chief hobbies were rock climbing, skiing, and gardening. Towards the end of their life, the couple shifted to a retirement colony in Pomona, California, where he led an active life tending to his garden. He was a member of FarmHouse fraternity while at the University of Nebraska. When Beadle was around eighty years old Beadle developed Alzheimer’s disease and over the course of time, it became so severe that he failed to connect with reality. He lived in this stage until his death on June 9, 1989. 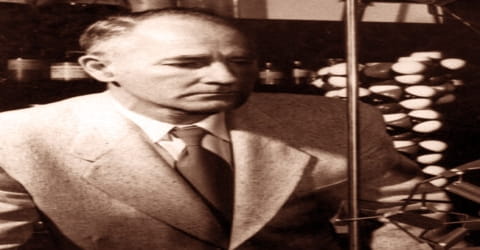 After earning his doctorate in genetics from Cornell University (1931), George Wells Beadle went to the laboratory of Thomas Hunt Morgan at the California Institute of Technology, where he did work on the fruit fly, Drosophila melanogaster. Beadle soon realized that genes must influence heredity chemically.

In 1931 Beadle was awarded a National Research Council Fellowship at the California Institute of Technology at Pasadena, where he remained from 1931 until 1936. During this period he continued his work on Indian corn and began, in collaboration with Professors Theodosius Dobzhansky, S. Emerson, and Alfred Sturtevant, work on crossing-over in the fruit fly, Drosophila

In 1935, Beadle went to Paris for six months. There at Institut de Biologie physico-chimique, Beadle and Ephrussi set out to determine if imaginal disc from one larva would develop into an eye when transplanted into another larva. Finally, they were able to produce an adult fly with three eyes, two in the normal head position and one in the abdomen. This work later became the foundation of his research on the genetics of the fungus Neurospora.

Beadle eventually returned to the U.S. and, in 1936, came to Harvard University to take his post as Assistant Professor of Genetics. The next year, he was made a Professor of Biology in Genetics at Stanford University and began collaborating with biochemist E.L. Tatum in his research. Together, they started working with the fungus Neurospora crassa (red bread mold). Through their work with this fungus, Beadle and Tatum were able to show that each gene would determine the structure of an enzyme, a protein molecule that speeds up biochemical reactions. In other words, Tatum and Beadle proved that genes regulate the formation of enzymes that, in turn, regulate the chemical processes within an organism’s cells. For this work and discovery, Beadle would go on to earn part of the Nobel Prize in Physiology or Medicine in 1958. Beadle is considered one of the founders of biochemical genetics as a result.

Then in 1941, after long and painstaking research, they came to the conclusion that each gene determined the structure of a specific enzyme, which in turn, affects the formation of the required metabolite. Their theory came to be known as ‘one gene-one enzyme hypothesis’.

In 1946 Beadle became a professor and chairman of the biology division at the California Institute of Technology and served there until 1960 when he was invited to succeed R. Wendel Harrison as chancellor of the University of Chicago; the title of president was reassigned to the position a year later. He retired from the university to direct (1968-70) the American Medical Association’s Institute for Biomedical Research.

After spending 9 years at Stanford University, Beadle served as the Chairman of the Division of Biology and Professor of Biology at the California Institute of Technology until 1961. He then became Chancellor and President of the University of Chicago. Later, that year, he became the President of this University. After retiring from there in 1968 he became the Director of the American Medical Association’s Institute for Biomedical Research and served the institute until 1970.

Beadle continued experimenting even after he had formally retired from the active service. He grew a series of Teosinte/Maize crosses in several laboratories across the United States and also in Mexico. He finally demonstrated that Teosinte is the wild progenitor of maize. In addition, he authored a number of books. Among them are ‘An Introduction to Genetics’ (1939; with A.H. Sturtevant), ‘Genetics and Modern Biology’ (1963), and ‘The Language of Life’ (1966; with Muriel M. Beadle).

In 1958, George Wells Beadle received the Nobel Prize for Physiology or Medicine with Edward Tatum “for their discovery that genes act by regulating definite chemical events”. They shared the prize with Joshua Lederberg, who received it for his work on genetic recombination.

In addition to the Nobel Prize, Beadle received numerous other awards. Beadle was a member of several learned societies, he was a Member of the National Academy of Sciences (and Chairman of Committee on Genetic Effects of Atomic Radiation), the Genetics Society of America (President in 1946), the American Association for the Advancement of Science (President in 1955), the American Cancer Society (Chairman of Scientific Advisory Council), a Foreign Member of the Royal Society (ForMemRS) of London, the Danish Royal Academy of Science and the American Philosophical Society.

In 1950, Beadle was awarded the Albert Lasker Award for Basic Medical Research by the Lasker Foundation. Incidentally, the award is often referred to as America’s Nobel Prize.

The George W. Beadle Award of the Genetics Society of America is named in his honor. George Beadle Middle School in Millard, Nebraska (Part of the Millard Public Schools district) was named after him. It opened in 2001. The Beadle Center, which houses the Department of Biochemistry at the University of Nebraska-Lincoln, is also named after George Beadle.

In 1984, Beadle received the Thomas Hunt Morgan Medal for his lifetime contribution to the field of genetics by the Genetic Society of America.

Beadle is best known for his work on ‘one gene-one enzyme hypothesis’. He did this work in close collaboration with Edward Tatum. They first induced mutation in Neurospora by exposing it to X-ray and found that some of the sprouting cells were unable to grow in the minimal cultural medium they had been provided with. These were then isolated and many normal metabolites began to be added to the cultural medium first in groups and then in singles. Finally, after years of painstaking experimentation, the two scientists established that genes act through the production of enzymes. They also concluded that each gene is responsible for producing a single enzyme and this enzyme, in its turn, affects a single step in a metabolic pathway. The theory was later dubbed as ‘one gene-one enzyme hypothesis’ and led to the formation of biochemical genetics.

During his career, Beadle has received many honors. These include the Honorary Doctor of Science of the following Universities: Yale (1947), Nebraska (1949), Northwestern University (1952), Rutgers University (1954), Kenyon College (1955), Wesleyan University (1956), the University of Birmingham and the University of Oxford, England (1959), Pomona College (1961), and Lake Forest College (1962). In 1962 he was also given the honorary degree of LL.D. by the University of California, Los Angeles. He was elected a Fellow of the American Academy of Arts and Sciences in 1946. He also received the Lasker Award of the American Public Health Association (1950), the Dyer Award (1951), the Emil Christian Hansen Prize of Denmark (1953), the Albert Einstein Commemorative Award in Science (1958), the Nobel Prize in Physiology or Medicine 1958 with Edward Tatum and Joshua Lederberg, the National Award of the American Cancer Society (1959), and the Kimber Genetics Award of the National Academy of Sciences (1960).