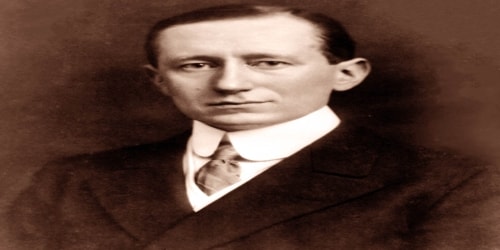 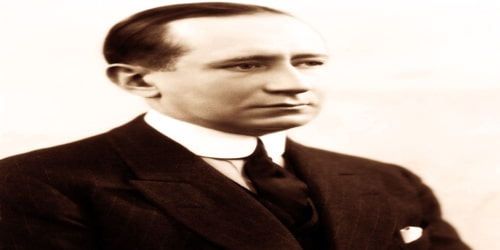 An Italian inventor, physicist, and electrical engineer, who was widely known as the “Father of Radio”, Guglielmo Marconi was born on 25th April 1874, in Palazzo Marescalchi, Bologna, Italy, the second son of Giuseppe Marconi and Anne Jameson. Marconi’s father was Italian and his mother Irish. He was awarded the Nobel Prize in Physics with Karl Ferdinand Braun in 1909 for their development of practical wireless telegraphy.

As a boy, Marconi was impressed by the works of Hertz, Maxwell, and Lodge. He began experimenting in his father’s estate and was successful in sending wireless signals over short distances, greater than a mile. He took his machine to England where his invention was received with enthusiasm. One of the interested parties was the British Post Office. Within a year, his successful endeavor of broadcasting to 12 miles, Marconi applied for his first patent. Determined to establish that wireless waves were not influenced by the curves of Earth, he transmitted his historic wireless signals across the Atlantic. The claims of his transatlantic signal were however never quite verified. Marconi continuously explored the various possibilities of the usage of radio waves beyond the spectrum of telecommunications. His experimentation resulted in discovering the use of microwave in physical therapy. Guglielmo Marconi, as an entrepreneur was quite conservative when it came to patents, as he never disclosed the full design until the patent was given to him, allowing him to realize the full monetary benefit.

Guglielmo Marconi was the founder of The Wireless Telegraph & Signal Company in the United Kingdom in 1897 (which became the Marconi Company). He succeeded in making an engineering and commercial success of radio by innovating and building on the work of previous experimenters and physicists. Marconi was ennobled as a Marchese (Marquis) by King Victor Emmanuel III of Italy, in 1929, and, in 1931, he set up the Vatican Radio for Pope Pius XI. 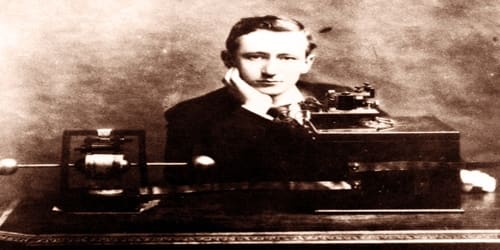 Guglielmo Marconi (Italian: ɡuʎˈʎɛlmo marˈkoːni), in full Guglielmo Giovanni Maria Marconi, was born on 25th April 1874, in Palazzo Marescalchi, Bologna, Italy, the second son of Giuseppe Marconi and his Irish/Scot wife Annie Jameson. His father was a wealthy Italian country gentleman and his mother, an Irish was the daughter of Daphne Castle and Andrew Jameson, a family of distillers. Marconi had a brother, Alfonso, and a stepbrother, Luigi. Between the ages of two and six, Marconi and his elder brother Alfonso lived with their mother in the English town of Bedford.

Marconi received his education privately at Bologna, Florence, and Leghorn. He did not attend school as a child and did not go on to formal higher education. As a young boy, he was fascinated with physical and electrical science and studied the earlier mathematical work of James Clerk Maxwell, the experiments of Heinrich Hertz and research on lightning and electricity conducted by Sir Oliver Lodge.

Marconi noted an important mentor was Professor Vincenzo Rosa, a high school physics teacher in Livorno. Rosa taught the 17-year-old Marconi the basics of physical phenomena as well as new theories on electricity. At the age of 18 and back in Bologna, Marconi became acquainted with University of Bologna physicist Augusto Righi, who had done research on Heinrich Hertz’s work. Righi permitted Marconi to attend lectures at the university and also to use the University’s laboratory and library.

Marconi married Maria Cristina Bezzi-Scali (the only daughter of Francesco, Count Bezzi-Scali) on 12th June 1927, in the civil service, with a religious ceremony performed on 15th June. They had one daughter, Maria Elettra Elena Anna (born 1930), who married Prince Carlo Giovannelli (1942-2016) in 1966; they later divorced. For unexplained reasons, Marconi left his entire fortune to his second wife and their only child, and nothing to the children of his first marriage.

Later in life, Marconi was an active Italian Fascist and an apologist for their ideology and actions such as the attack by Italian forces in Ethiopia. 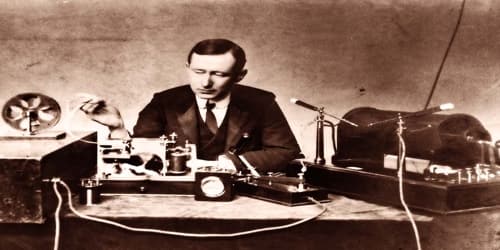 In 1995, Guglielmo Marconi conducted experiments at his home (60 kilometers southwest of Venice) and succeeded in transmitting wireless signals over a distance of 1.5 miles (2.4 km). He tried to gain recognition in Italy but was unable to generate much interest there so he took his ideas to London. There he was introduced to Sir William Preece, chief engineer of the British Post Office. With his guidance and help, Marconi was able to develop and patent the world’s first system of wireless telegraphy in 1897, just within a year of having arrived in London.

After successfully demonstrating the system’s ability to transmit radio signals in London, on Salisbury Plain, and across the Bristol Channel, Marconi established the Wireless Telegraph & Signal Company Limited in July 1897. This company was re-named as Marconi’s Wireless Telegraph Company Limited in 1899. The pioneering inventor sent signals across the English Channel, and established wireless communication between France and England, in 1899. A wireless station was started in South Foreland for communication with Wimereux in France. The same year, British battleships also exchanged messages in a distance of 75 miles. Marconi also transmitted the first wireless signals across the Atlantic, a distance of 2100 miles, between Cornwall and Newfoundland.

Marconi equipped two American ships to report to newspapers in New York City the progress of the yacht race for the America’s Cup, in September 1899. The success of this demonstration aroused worldwide excitement and led to the formation of the American Marconi Company. The following year the Marconi International Marine Communication Company, Ltd., was established for the purpose of installing and operating services between ships and land stations. On 15th November Saint Paul became the first ocean liner to report her imminent return to Great Britain by wireless when Marconi’s Royal Needles Hotel radio station contacted her 66 nautical miles off the English coast.

In 1900, Marconi took his patent for ‘syntonic or tuned telegraphy’. The following year, he established transatlantic communication between Cornwall and Newfoundland, thus establishing that Earth’s curvature can never interfere with wireless signals. He filed his now-famous patent No. 7777 for Improvements in Apparatus for Wireless Telegraphy. The patent, based in part on earlier work in wireless telegraphy by Sir Oliver Lodge, enabled several stations to operate on different wavelengths without interference. During December 1901 Marconi proved that wireless signals were unaffected by the curvature of the earth. He transmitted the first wireless signals across the Atlantic between Poldhu, Cornwall and St, Johns, Newfoundland, a distance of 2100 miles.

In 1902, during a voyage on the U.S. liner Philadelphia, Marconi received messages from distances of 1,125 km (700 miles) by day and 3,200 km (2,000 miles) by night. He thus was the first to discover that, because some radio waves travel by reflection from the upper regions of the atmosphere, transmission conditions are sometimes more favorable at night than during the day. This circumstance is due to the fact that the upward travel of the waves is limited in the daytime by absorption in the lower atmosphere, which becomes ionized and so electrically conducting under the influence of sunlight.

A transmission from the Marconi station on 17th December 1902, in Glace Bay, Nova Scotia, Canada became the world’s first radio message to cross the Atlantic from North America. Marconi built a station near South Wellfleet, Massachusetts, in 1901 that sent a message of greetings on 18th January 1903 from the United States President Theodore Roosevelt to King Edward VII of the United Kingdom. However, consistent transatlantic signaling was difficult to establish. Marconi began to build high-powered stations on both sides of the Atlantic to communicate with ships at sea, in competition with other inventors.

During the ensuing three years, Marconi also developed and patented the horizontal directional aerial. Both of these devices improved the efficiency of the communication system. He received messages, in 1910 at Buenos Aires from Clifden in Ireland over a distance of approximately 9,650 km (6,000 miles), using a wavelength of about 8,000 meters (5 miles). Two years later Marconi introduced further innovations that so improved transmission and reception that important long-distance stations could be established. This increased efficiency allowed Marconi to send the first radio message from England to Australia in September 1918.

In the decade between 1902 and 1912, Guglielmo Marconi took out several patents for new inventions, including the “magnetic detector” which served as the standard wireless receiver for many years. His system of radio telegraphy was responsible for the rescue of the 700 survivors of the Titanic crash in 1913. He joined the Italian Army as a Lieutenant, in 1914 and later got promoted to the rank of Captain. Marconi joined the Navy as a Commander, in 1916. He was a member of the Italian Commission to the US in 1917 and a delegate of the Paris Peace Conference in 1919. He also received a medal for war service in 1919.

Guglielmo Marconi shared his Nobel Prize with Karl F. Braun, in 1909. Karl helped to modify the transmitters of Marconi to enhance their usage and range. Though he was awarded the Nobel Prize for co-discovering the wireless telegraphy his title ‘Father of Radio’ was challenged several times by others. According to claims, Alexander Popov, a Russian scientist was broadcasting between structures; while in India Jagadish Chandra Bose was using radio waves for ringing the bells.

During World War I, in 1916 Marconi saw the possible advantages of shorter wavelengths that would permit the use of reflectors around the aerial, thus minimizing the interception of transmitted signals by the enemy and also effecting an increase in signal strength. After tests in Italy (20 years after his original experiments with reflectors), Marconi continued the work in Great Britain and, on a wavelength of 15 meters (49 feet), received signals over a range of 30-160 km (20-100 miles). 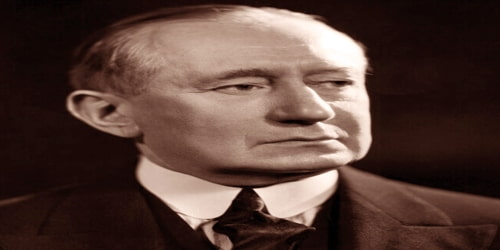 Marconi established the “beam system” for long distance communication which was accepted by the British government as a means of imperial communication, leading to the first beam station linking England and Canada. His research led to the establishment of the world’s first microwave radiotelephone link, set up between the Vatican City and Castel Gandolfo. He was also instrumental in setting up the British Broadcasting Company in 1922.

The Marconi Company obtained a contract from the post office to establish shortwave communication between England and the countries of the British Commonwealth, in 1924. Using very short wavelengths, Marconi installed a radiotelephone system between Vatican City and the pope’s palace at Castel Gandolfo, in 1932. In later work, Marconi once more demonstrated that even radio waves as short as 55 cm (22 inches) are not limited in range to the horizon or to the optical distance between transmitter and receiver. Continuing with his experiments, he established the world’s first microwave radiotelephone link in 1932, and later he devised the microwave beacon for ship navigation.

Guglielmo Marconi was decorated with the ‘Order of St. Anne by the Tsar of Russia’.

Marconi was honored with the ‘Grand Cross of the Order of the Crown of Italy’, in 1902. He was given the position of ‘Chevalier of the Civil Order of Savoy’ in the year 1905.

In 1909, Guglielmo Marconi was awarded the Nobel Prize for Physics for the development of wireless telegraphy, which he shared with Professor Karl Ferdinand Braun.

In 1914, Marconi was appointed as the ‘Honorary Knight Grand Cross of the Royal Victorian Order’ in England.

Guglielmo Marconi died in Rome on 20th July 1937 at age 63, following a series of heart attacks, and Italy held a state funeral for him.

This accomplished inventor first used wireless telegraphy to send signals over distances as long as one and a half miles, in 1895. Throughout his career, Marconi worked on perfecting his technique and telegraph and radio remained a highly useful means of communication before the arrival of more sophisticated means of conversation. In the year 1943, the US Supreme Court declared that Marconi’s radio patent was invalid as other scientists like Nikola Tesla has already discovered certain theories related to wireless telegraphy before him.

In 1931 Guglielmo Marconi wanted to personally introduce the first radio broadcast of a Pope, Pius XI, and did announce at the microphone: “With the help of God, who places so many mysterious forces of nature at man’s disposal, I have been able to prepare this instrument which will give to the faithful of the entire world the joy of listening to the voice of the Holy Father”.