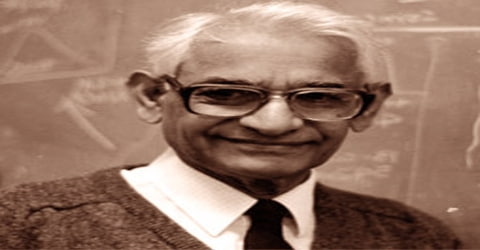 An Indian-born American biochemist who shared the 1968 Nobel Prize for Physiology or Medicine with Marshall W. Nirenberg and Robert W. Holley for research that helped to show how the nucleotides in nucleic acids, which carry the genetic code of the cell, control the cell’s synthesis of proteins, Har Gobind Khorana was born on 9th January 1922, to Krishna Devi Khorana and Ganpat Rai Khorana, in Raipur, a village in Punjab, British India (now in present-day Pakistan) in a Hindu family.

Born in British India, Khorana served on the faculties of three universities in North America. He became a naturalized citizen of the United States in 1966 and received the National Medal of Science in 1987. In addition to developing methods for investigating the structure of the nucleic acids, Khorana introduced many of the techniques that allowed scientists to decipher the genetic code and show how ribonucleic acid (RNA) can specify the structure of proteins. Four years after winning the Nobel Prize, Khorana succeeded in synthesizing the first wholly artificial gene. In the 1980s Khorana synthesized the gene for rhodopsin, a protein involved in vision.

From the boy who started his primary education studying from a village teacher under a tree to a world-renowned biochemist, his life was one long eventful journey. Even though born to poor parents, his family was very keen that their boy gets a good education. Khorana was always a good student and it was no surprise when he won a scholarship to study chemistry at the Punjab University. He shone brilliantly in his studies and was soon off to the University of Liverpool to pursue higher education, again on a scholarship from the Government of India. His interest lay in human genetics and he began experimenting on nucleic acids found in RNA. For his discoveries in the field of DNA which carry the genetic code of all living beings, he jointly won the Nobel Prize for Medicine with Marshall W. Nirenberg and Robert W. Holley in 1968. By now he had become a citizen of the US and was continually uncovering newer information about human genetics. An organic chemist who specialized in the study of proteins and nucleic acids, Har Gobind Khorana was born as the youngest child to Hindu parents of Shri Ganput Rai Khorana and Shrimat Krishna Devi Khorana, was born in Raipur, in the Punjab region of India (now part of West Pakistan). His birth date was recorded as January 9, 1922, but the exact date of his birth is uncertain. He had three elder brothers and one sister. His father worked as the village “patwari” or taxation officer. His family was poor but his father insisted on providing him a good education. Early on he went to a local school where he was educated under a tree by a village teacher; his father also taught him at home. His family was, in fact, the only literate one in the whole village.

Khorana attended D.A.V. High School in Multan (now West Punjab). After receiving his Bachelor of Science (1943, with honors) and Master’s degree (1945, with honors) from Punjab University in Lahore, India. A brilliant student, he was awarded a scholarship by the Government of India to study at the University of Liverpool. Khorana went to England where he worked for a Ph.D. degree at the University of Liverpool under the supervision of Roger J.S. Beer. It was the first time he had traveled outside India and this experience was his introduction to Western culture. He earned his Ph.D. in 1948.

Khorana continued his postdoctoral studies in Zurich at the Eidgenossische Technische Hochschule with Professor Vladimir Prelog, who had a major influence on his life-long approach to science.

Har Gobind Khorana married Esther Elizabeth Sibler who was of Swiss origin in 1952. The couple had three children. Unfortunately one of their daughters died in 1979. They remained happily married until Esther’s death. During a brief period in 1949, Har Gobind Khorana was unable to find a job in his original home area in Punjab. He returned to England on a fellowship to work with George Wallace Kenner and Alexander R. Todd on peptides and nucleotides. He stayed in Cambridge from 1950 until 1952. He received a job offer from Dr. Gordon M Shrum of the University of British Columbia, Vancouver, in 1952. He accepted even though the British Columbia Research Council did not offer many facilities for research. Dr. Shrum was a very inspiring man and Khorana could engage in whatever research he wanted to conduct under him. Along with a group of other researchers, he began to work in the field of phosphate esters and nucleic acids.

In 1953, Khorana and Todd published their only coauthored paper; it described the use of a novel phosphorylating reagent. Khorana found that this reagent was very useful in overcoming problems in the synthesis of polynucleotides. Between 1956 and 1958, Khorana and his coworkers established the fundamental techniques of nucleotide chemistry. Their goal was to develop purely chemical methods of synthesizing oligonucleotides (long chains of nucleotides). In 1955, Khorana learned about Severo Ochoa’s discovery of the enzyme polynucleotide phosphorylase and met Arthur Kornberg, who described pioneering research on the enzymatic synthesis of DNA. These discoveries revolutionized nucleic acid research and made it possible to elucidate the genetic code. Khorana and his coworkers synthesized each of the 64 possible triplets (codons) by synthesizing polynucleotides of known composition. Khorana also devised the methods that led to the synthesis of large, well-defined nucleic acids.

In 1960, Khorana accepted a position at the Institute for Enzyme Research at the University of Wisconsin. During the 1960s he delved deeper into his experiments in nucleic acids found in RNA, a chemical that translates the genetic information contained in DNA. RNA is composed of four chemical bases represented by the letters A, C, U, and G. In 1961, Khorana synthesized Coenzyme A, a factor needed for the activity of certain key metabolic enzymes. Using chemical synthesis to combine the chemical bases, Khorana deduced that the code for serine was UCU and for leucine it was CUC. He showed that the genetic code consisted of 64 distinct three-letter words.

Khorana became a professor of biochemistry in 1962 and was named Conrad A. Elvehjem Professor of Life Sciences at Wisconsin-Madison. While at Wisconsin, “he helped decipher the mechanisms by which RNA codes for the synthesis of proteins” and “began to work on synthesizing functional genes” according to the American Chemical Society. During his tenure at this University, he completed the work that led to sharing the Nobel prize. The Nobel web site states that it was “for their interpretation of the genetic code and its function in protein synthesis”. Har Gobind Khorana’s role is stated as follows: he “made important contributions to this field by building different RNA chains with the help of enzymes. Using these enzymes, he was able to produce proteins. The amino acid sequences of these proteins then solved the rest of the puzzle.”

Biochemist Marshall W. Nirenberg had independently been working on genetics and Khorana confirmed the former’s findings that four different types of nucleotides are arranged on the spiral staircase of the DNA molecule. He proved that the nucleotide code is transmitted in groups of three called codons to the cells. Some codons are responsible for signaling to the cells to start or stop the manufacture of proteins. He became the Alfred Sloan Professor of Biology and Chemistry at the Massachusetts Institute of Technology (MIT) in 1970 and remained there till his retirement in 2007. In addition to the Nobel Prize, Khorana received the Albert Lasker Basic Medical Research Award (1968) and the National Medal of Science (1987).

Once the genetic code had been elucidated, Khorana focused on gene structure-gene function relationships and studies of DNA-protein interactions. In order to understand gene expression, Khorana turned to DNA synthesis and sequencing. Recognizing the importance of the class of ribonucleotides known as transfer RNAs (tRNAs), Khorana decided to synthesize the DNA sequence that coded for alanine tRNA. The nucleotide sequence of this tRNA had been determined in Robert Holley’s laboratory. In 1970, when Khorana announced the total synthesis of the first wholly artificial gene, his achievement was honored as a major landmark in molecular biology. Six years later, Khorana and his associates synthesized another gene. In the 1980s, Khorana carried out studies of the chemistry and molecular biology of the gene for rhodopsin, a protein involved in vision. Khorana was successful in constructing the first ever artificial gene in 1972. A few years later he made the artificial gene function in a bacteria cell. Genetic engineering has been made possible only due to the ability to synthesize DNA. During his later years, he experimented on the molecular mechanisms underlying the cell signaling pathways of vision in vertebrates. He primarily studied the structure and function of rhodopsin, a light-sensitive protein found in the eye.

A summary of his work was provided by a former colleague at the University of Wisconsin: “Khorana was an early practitioner, and perhaps a founding father, of the field of chemical biology. He brought the power of chemical synthesis to bear on deciphering the genetic code, relying on different combinations of trinucleotides.”

In 1968 the Nobel Prize in Physiology or Medicine was awarded jointly to Har Gobind Khorana, Robert W. Holley, and Marshall W. Nirenberg “for their interpretation of the genetic code and its function in protein synthesis”. Khorana was elected as Foreign Member of the Royal Society (ForMemRS) in 1978.

In 2009, Khorana was hosted by the Khorana Program and honored at the 33rd Steenbock Symposium in Madison, Wisconsin. Other honours included the Louisa Gross Horwitz Prize from Columbia University and the Lasker Foundation Award for Basic Medical Research, both in 1969, the Willard Gibbs Medal of the Chicago section of the American Chemical Society, in 1974, the Gairdner Foundation Annual Award, in 1980 and the Paul Kayser International Award of Merit in Retina Research, in 1987.

Har Gobind Khorana died on 9 November 2011, in Concord, Massachusetts, at the age of 89. His wife, Esther, and daughter, Emily Anne, had died earlier, but Khorana was survived by his other two children. Julia later wrote about his work as a professor. “Even while doing all this research, he was always really interested in education, in students and young people.”

Har Gobind Khorana was a world-renowned biochemist famous for his work in the field of genetics and DNA. He was the first person to demonstrate the role of nucleotides in protein synthesis.

In his obituary, the Washington Post provided this summary of the man: “Dr. Khorana was known for a modest, ingratiating manner. He tended to shun publicity, making many of his most important scientific announcements at departmental seminars and in scientific publications”.

In 2007, the University of Wisconsin-Madison, the Government of India (DBT Department of Biotechnology), and the Indo-US Science and Technology Forum jointly created the Khorana Program, jointly. The mission of the Khorana Program is to build a seamless community of scientists, industrialists, and social entrepreneurs in the United States and India.

On 9 January 2018, a Google Doodle celebrated the achievements of Har Gobind Khorana on what would have been his 96th birthday.