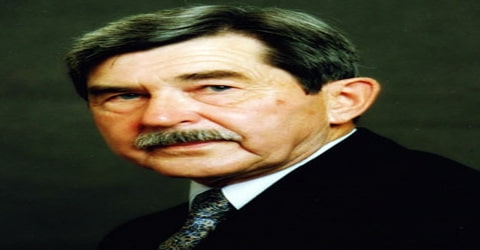 A Canadian-born American chemist, who won the Nobel Prize for Chemistry in 1983 for his extensive research into the properties and reactions of dissolved inorganic substances, particularly oxidation-reduction processes involving the ions of metallic elements, Henry Taube was born November 30, 1915, in Neudorf, Saskatchewan, Canada as the youngest of four boys. His parents were German ethnics from Ukraine which had immigrated to Saskatchewan from Ukraine in 1911. Taube was the second Canadian-born chemist to win the Nobel Prize and remains the only Saskatchewanian-born Nobel laureate. Taube completed his undergraduate and Masters degrees at the University of Saskatchewan, and his Ph.D. from the University of California, Berkeley. After finishing graduate school, Taube worked at Cornell University, the University of Chicago and Stanford University.

Taube was noted and earned much acclaim on his studies regarding the mechanism and oxidation-reduction process during chemical reactions. After his graduation, he worked at the university for a short period and also served the National Defense Research Committee during World War II. Post this period, he joined the University of Chicago where he worked for fifteen years and later joined the Stanford University as faculty and became professor emeritus in 1986. He was the recipient of several prestigious awards like the Priestley Medal, National Medal of Science and the Welch Award among many others. He was a two-time recipient of the Guggenheim fellowships in 1949 and 1955. Henry Taube had to his credit over 600 publications during his career. He also authored a book titled ‘Electron transfer reactions of complex ions in solution’.

Henry Taube also received many other major scientific awards, including the Priestley Medal in 1985 and two Guggenheim Fellowships early in his career (1949 and 1955), as well as numerous honorary doctorates. His research focused on redox reactions, transition metals and the use of isotopically labeled compounds to follow reactions. He had over 600 publications including one book and had mentored over 200 students during his career. Taube and his wife Mary had three children, his son Karl is an anthropologist at the University of California Riverside. Henry Taube was born on 30 November 1915 at Neudorf, Saskatchewan in Canada. His parents, Samuel Taube and Albertina Tiledetzski were farmers. He had three older brothers. His parents were German ethnics from Ukraine which had immigrated to Saskatchewan from Ukraine in 1911. Growing up, his first language was Low German.

In the 1700s, Catherine the Great encouraged Central European farmers to settle in Russia. As the rights afforded to these settlers by Catherine were gradually diminished, many of the settlers headed to North America, with Saskatchewan offering good farmland and other incentives for immigrants. Taube reflected fondly on his experiences growing up in Saskatchewan, noting: “Certainly, there is nothing about my first 21 years in Saskatchewan, taken in the context of those times that I would wish to be changed. The advantages that I enjoyed include the marvelous experience of growing up on a farm, which taught me an appreciation of nature, and taught me also to discipline myself to get necessary jobs done…”

At the age of 12, Taube shifted to Regina in order to pursue high school education at Luther College. After completing his studies, he began working at the college as a laboratory assistant for Paul Liefeld. He graduated with a Bachelor of Science degree in 1935 and completed his Master of Science degree in 1937 from the University of Saskatchewan. Taube then joined the University of California at Berkeley and completed his Ph.D. in Chemistry in 1940. His graduate research was on the ‘photodecomposition of chlorine dioxide and hydrogen peroxide in solution’.

Henry Taube married his wife, Mary Alice Wesche in 1952. They had three children, Karl, Heinrich, and Linda. His stepdaughter, Marianna died of cancer in 1998.

Henry Taube became a naturalized citizen of the United States in 1942. His hobbies included classical music primarily opera and gardening. After completing his education, Henry Taube worked in Berkeley as an instructor in chemistry until 1941. Though he applied for work in major universities across Canada, he did not receive positive responses and in 1941 joined Cornell University as an assistant professor. He remained there until 1946. While working at Cornell University he focused on research concerning isotopes. His study showed that in water the ions of metals develop bonds with water molecules thereby producing hydrates or coordination compounds. The geometry and strength of these coordination compounds vary according to the identity and state of oxidation of the ion. In the presence of specific chemical species like chlorine ions, ammonia, etc, analogous coordination compounds when engaged in such reactions from ‘ligands’.

In the late 1940s, Taube carried out experiments with isotopes to show that in water solution the ions of metals from chemical bonds with several molecules of water and that the stability and geometric arrangement of the resulting hydrates, or coordination compounds, vary widely, depending on the identity and oxidation state of the ion. He also helped develop other techniques for studying such substances, and he devised an interpretation of their properties in terms of their electronic configurations. Analogous coordination compounds form in the presence of ammonia, chloride ions, or numerous other chemical species, which are called ligands when they engage in these reactions.

During World War II, Taube served on the National Defense Research Committee. Taube spent time at the University of Chicago as an assistant professor, associate professor and as a full professor from 1946-61. He served as chair of the chemistry department in Chicago from 1956-59 but did not enjoy administrative work. After leaving Chicago, Taube worked as a professor at Stanford University until 1986, a position that allowed him to focus on research, while also teaching classes at the undergraduate and graduate levels. Beginning in 1956, apart from his academic career Henry Taube worked as a consultant at Los Alamos National Laboratory. He was associated with the laboratory until the 1970s.

In 1952 Taube released a paper on his work associating the rate of chemical reactions to the electronic structure in the journal, Chemical Reviews. His primary discovery was that rather than a mere exchange of electrons, molecules build a sort of ‘chemical bridge’. He also explained how the process of transfer of electrons in metals is dependent on the structure of the chemical bridge. He pursued a lifelong interest in studying oxidation-reduction otherwise known as ‘redox’ reactions, in which electrons are gained or lost in a chemical reaction process. His research findings have been utilized in the selection of metallic compounds as catalyst, superconductors, and pigments, also in studying the role and uses of metal ions as components in specific enzymes. He conducted his electron transfer studies in elements ruthenium and osmium that have an immense capacity for Pi back bonding.

When looking back on his research, Taube explained that he sometimes had difficulty finding graduate students willing to work on electron transfer reactions, as they preferred to work on more “exciting” projects in his laboratory focusing on the effects of isotopic tracers and kinetics. Taube felt that a “primary flaw” with his correlation between electron configuration and ligand substitution was that it was described mainly in terms of valence bond theory, as crystal field theory and ligand field theory were not well established when he published his work in 1952.

Taube showed that, in an intermediate stage of the reaction, a chemical bond must form between one of the ions and a ligand that is still bonded to the other. This ligand acts as a temporary bridge between the two ions, and its bond to the original ion can later break in such a way as to affect indirectly the electron transfer that completes the reaction. Taube’s findings have been applied in selecting metallic compounds for use as catalysts, pigments, and superconductors and in understanding the function of metal ions as constituents of certain enzymes.

In 1962 Taube left Chicago to join Stanford University as a professor. He worked there until 1986 and became a professor emeritus at the university in the same year. His position at Stanford University allowed him to continue his research work which he continued until 2001. During the span of his career, he wrote over 600 publications and a book titled ‘Electron transfer reactions of complex ions in solution’ (1970). Taube was awarded the 1983 Nobel Prize in Chemistry “for his work on the mechanisms of electron transfer reactions, especially in metal complexes.” He received his award on December 8, 1983, with the presentation speech being delivered by Ingvar Lindqvist of the Swedish Royal Academy of Sciences. Taube’s Nobel Lecture was entitled “Electron Transfer between Metal Complexes – Retrospective.” His Nobel Prize was the first awarded to a Canadian-born chemist. Taube’s win was the first for an inorganic chemist since 1913 (Alfred Werner), breaking a long string of awards to organic chemists. His initial paper in Chemical Reviews was 30 years old at the time of his Nobel Prize victory, but the correlation he described between the rate of ligand substitution and electronic configuration for transition metal coordination complexes was still the predominant theory about the reaction chemistry of these compounds. After being awarded the Nobel Prize, Taube noticed a side benefit to the prestigious award – his students paid better attention in class.

When Henry Taube stopped his active research projects in 2001, Taube continued to be available as a reviewer and consultant, but his main goal was “enjoying life”. Away from chemistry, Taube had varied interests including gardening and classical music, mainly opera. In 2003 he was one of 22 Nobel Laureates who signed the Humanist Manifesto.

Henry Taube was a two-time recipient of the Guggenheim fellowship, once in 149 and the next in 1955. In 1955 he was awarded the American Chemical Society Award for Nuclear Applications in Chemistry. The Harrison Howe Award, Rochester Section by American Chemical Society was bestowed upon him in 1960. He was the recipient of the 1964 Chandler Medal by Columbia University.

In 1966 the John Gamble Kirkwood Award, New Haven Section, American Chemical Society was awarded to Henry Taube. The ACS Award for Distinguished Service in the Advancement of Inorganic Chemistry was awarded to him in 1967.

In 1971 Henry Taube was awarded the Nichols Medal, New York, ACS as well as the Willard Gibbs Medal, Chicago Section, ACS. The University of New South Wales, Australia, awarded him with the F.P. Dwyer Medal in 1973. In 1977 Taube was awarded the National Medal of Science. He was the recipient of the Allied Chemical Award for Excellence in Graduate Teaching & Innovative Science in 1979. In 1980 the T.W. Richards Medal of the Northeastern Section, ACS was awarded to him. The ACS Award in Inorganic Chemistry of the Monsanto Company and The Linus Pauling Award, Puget Sound Section, ACS were awarded to him in 1981.

Henry Taube was awarded the 1983 Nobel Prize in Chemistry “for his work on the mechanisms of electron transfer reactions, especially in metal complexes.”

In 1985, Taube received the American Chemical Society’s highest honor, the Priestley Medal, which is awarded to recognize “distinguished services to chemistry”.

In 1990 Taube received the G. M. Kosolapoff Award, Auburn Section- ACS. A Nobel Laureate Plaza on the University of Saskatchewan’s campus in honor of Taube and Gerhard Herzberg was dedicated in 1997.

Henry Taube was a renowned chemist noted for his studies of electron transfer reactions primarily in metal complexes and research regarding ‘redox’ reactions or oxidation-reduction reactions.

In 1981, Taube became a founding member of the World Cultural Council. As of 1997, Taube had over 600 publications and had worked with over 250 students. He published a book, Electron Transfer Reactions of Complex Ions in Solution (Current Chemical Concepts) in 1970. His students have had faculty positions at many prestigious universities, including Cornell, Rutgers, Georgetown and Georgia Tech. His Colleagues remember Taube as a dedicated scientist, Jim Collman of Stanford said: “Henry was a scientist’s scientist and a dominant figure in the field of inorganic chemistry.” Harry Gray, a professor at California Institute of Technology said, “He was in a class by himself, a role model and leader whom we all admired and loved.” Former student Peter Ford remembers that Taube “made chemistry not only challenging and stimulating but a lot of fun as well.”