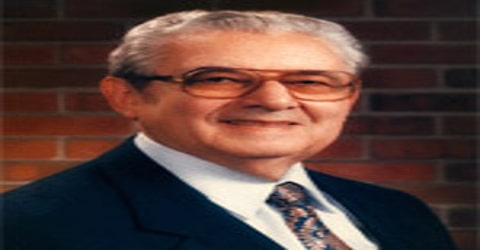 One of the leading American chemists of the 20th century, Herbert Charles Brown was born on May 22, 1912, in London, to Ukrainian Jewish immigrants from Zhitomir, Pearl (née Gorinstein) and Charles Brovarnik, a hardware store manager and carpenter. His seminal work on customized reducing agents and organoborane compounds in synthetic organic chemistry had a major impact on both academic and industrial chemical practice and led to his sharing the 1979 Nobel Prize for Chemistry with the German chemist Georg Wittig.

Brown made several notable contributions to the field of organic chemistry, especially to organoboron chemistry or organoborane chemistry. The son of Jewish immigrants in London, he moved to the United States with his family when he was a toddler. He was a brilliant student from a young age and developed a voracious reading habit. An unfortunate incident during his high school years forced him to drop out but the determined boy persevered and completed his graduation. More difficulties followed during the Great Depression but Brown somehow continued his education and earned a B.S. in 1936, followed by a doctorate two years later. Married by now, he looked for a job but was unable to find a suitable one. Thus he was pushed into an academic career as a post-doctorate fellow and began his research in chemistry that would eventually lead to his seminal work with organoboranes. He worked along with Hermann Irving Schlesinger in his laboratory and the two men came up with significant discoveries for the National Defense Research Committee. Brown spent most of his academic career at Purdue University in West Lafayette, Indiana, and retired in 1978.

Brown was also widely recognized in the chemical community for his work on the steric strain, his work on aromatic substitution and his long battle with much of the chemical establishment regarding the non-classical ion. In his extremely productive career, he published four books and more than one thousand scientific papers.

Herbert Charles Brown, original name Herbert Brovarnik, was born on May 22, 1912, in London, England, UK. His parents, Charles Brovarnik and Pearl Gorinstein, were born in Zhitomir in Ukraine and came to London in 1908. He had three sisters. The family moved to the United States in 1914 where his father opened a small hardware store. Herbert went to the Haven School where he excelled in his studies. He then went to Englewood High School but was forced to drop out after the untimely death of his father in 1926. Brown attended Crane Junior College in Chicago, where he met Sarah Baylen, whom he would later marry. The college was under threat of closing, and Brown and Baylen transferred to Wright Junior College.

Brown planned to major in electrical engineering but his interest soon shifted to chemistry. He had just completed one semester at Crane Junior College when it was announced in 1933 that the school was to be closed for lack of funds. Following this, he went to night school at the Lewis Institute and also worked odd jobs to make ends meet. During this time, one of his instructors at Crane opened his laboratory to several students so that they could continue their studies. Brown along with several others experimented there.

In 1935 Brown left Wright Junior College and that autumn entered the University of Chicago, completed two years of studies in three quarters, and earned a B.S. in 1936. That same year, he became a naturalized United States citizen. On February 6, 1937, Brown married Baylen, the person he credits with making him interested in hydrides of boron, a topic related to the work in which he, together with Georg Wittig, won the Nobel prize in Chemistry in 1979. Two years after starting graduate studies, he earned a Ph.D. in 1938, also from the University of Chicago.

His dissertation, under the direction of Hermann Schlesinger, involved the reaction of diborane with aldehydes and ketones. It was the beginning of a lifetime’s devotion to organoborane chemistry. Boron-hydrogen compounds and their derivatives are known as borane. Postdoctoral study of the chlorosulfonation of alkanes (hydrocarbon compounds with only single molecular bonds) may likewise be seen as the genesis of his almost equally long devotion to physical organic chemistry.

Herbert Charles Brown met and fell in love with Sarah Baylen while they were both students. The couple tied the knot in 1937 and were blessed with one child. They were happily married until Brown’s death. In 1939 Herbert C. Brown became Professor Schlesinger’s personal research assistant. World War II soon came to dominate the research carried out by Schlesinger’s group at Chicago. Contributions were made to the Army Signal Corps’ desire for a convenient method for the field generation of hydrogen. Of more lasting importance, though, were the discovery and large-scale preparation of sodium borohydride and lithium aluminum hydride. Sodium borohydride is a relatively mild reducing agent, while lithium aluminum hydride is among the most powerful.

Unable to find a position in the industry, Brown decided to accept a postdoctoral position. This became the beginning of his academic career. He became an instructor at the University of Chicago in 1939 and held the position for four years before moving to Wayne University in Detroit as an assistant professor.

A major portion of Brown’s research at Chicago (1939-43), Wayne State University (1943-47) in Detroit, and Purdue University (1947-78) in West Lafayette, Ind., was devoted to the development of new reducing agents. As a consequence of his work, organic chemists obtained an unparalleled array of reducing agents carefully tailored to specific synthetic requirements. It was this work that was alluded to in the first part of the citation for his Nobel Prize.

At that time diborane, gas was made in only two laboratories in the world, those of Stock and Schlesinger, and in both laboratories, the process was difficult and the yields very low. Brown’s thesis work involved the reduction of aldehydes, ketones, and esters with diborane (B2 H6) and was certainly a precursor to the Brown-led revolution that eventually would take place in organic chemistry.

During World War II, while working with Hermann Irving Schlesinger, Brown discovered a method for producing sodium borohydride (NaBH4), which can be used to produce boranes, compounds of boron and hydrogen. His work led to the discovery of the first general method for producing asymmetric pure enantiomers. The elements found as initials of his name H, C and B were his working field.

After working for four years at Chicago, Brown moved to the Wayne University in Detroit as an assistant professor. He was promoted to associate professor in 1946. He became a professor of inorganic chemistry at Purdue University in 1947 and joined the Beta Nu Chapter of Alpha Chi Sigma there in 1960. He held the position of Professor Emeritus from 1978 until his death in 2004. The Herbert C. Brown Laboratory of Chemistry was named after him on Purdue University’s campus. He was an honorary member of the International Academy of Science.

When Brown moved to Purdue University in 1947, he worked to find stronger borohydrides and milder aluminum hydrides that would provide a spectrum of reducing agents. The team of researchers at Purdue discovered that changing the metal ion of the borohydride to lithium, magnesium, or aluminum increases the reducing ability. They also found that introducing alkoxy substituents to the aluminum hydride decreases the reducing ability. They successfully developed a full spectrum of reducing agents. He spent the rest of academic career there and became a Professor Emeritus in 1978. He was also an honorary member of the International Academy of Science.

In 1979, Herbert C. Brown and Georg Wittig were jointly awarded the Nobel Prize in Chemistry “for their development of the use of boron- and phosphorus-containing compounds, respectively, into important reagents in organic synthesis”

Herbert Charles Brown suffered a heart attack and died on December 19, 2004, at the age of 92.

Brown was renowned for his works with organoboranes or organoboron compounds which are chemical compounds of boron and carbon that are organic derivatives of BH3. He is credited to have discovered the concept that boranes react rapidly to alkenes in a process called hydroboration.

Brown wrote Hydroboration (1962) and Organic Syntheses via Boranes (1975), among other works. He also gave a large number of named lectures at most of the major universities in the country, including Harvard, Columbia, Cornell, Johns Hopkins, and the University of Pennsylvania.)