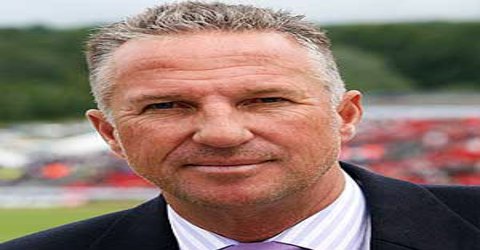 Sir Ian Terence Botham OBE was born on 24 November 1955, in Heswall, Wirral England. He is a former England Test cricketer and Test team captain, and current cricket commentator. He was a genuine all-rounder. In Test cricket, Botham scored 5,200 runs (14 centuries), took 383 wickets and, fielding predominantly in the slips, held 120 catches. In all first-class cricket, he scored 19,399 runs at an average of 33.97, took 1,172 wickets at 27.22 and held 354 catches. He played mainly for Somerset; and also for Durham and Worcestershire as well as a season (1987–88) in Australia playing for Queensland.

His flamboyant batting and successful bowling had the capacity to win games and excite the spectators. His greatest moment came in the 1981 Ashes test at Headingley – where Ian Botham led England to the most spectacular and unpredictable recovery against Australia.

Botham was a talented footballer, and made 11 appearances in the Football League for Scunthorpe United. He remains well known by his nickname “Beefy”. Ian Terence Botham OBE, was born November 24, 1955 in Heswall, Cheshire. Both his parents played cricket. He went to Milford Junior School in Yeovil, Somerset, where his “love affair” with sport began, and played for Somerset Under-15s. He left Bucklers Mead Comprehensive School at the age of 15, intent on playing cricket for the Somerset County Cricket Club, although he also had an offer to play football for Crystal Palace F.C. From an early age he was always single-minded. (Cricket legend Sir Ian Botham with his family in 1986)

In 1976, in the Borough of Doncaster, Botham married Kathryn Waller (now Lady Botham) whom he first met in June 1974. After their marriage, they lived until the late 1980s in Epworth, near Scunthorpe. They have one son, Liam (born August 1977), and two daughters, and Liam is a former professional cricketer and rugby player.

Botham is an enthusiastic football fan and supports Chelsea. He is also a vice president at Scunthorpe United Football Club. Botham is also passionate about playing golf. Ian Botham is also an avid trout and salmon angler, and presented a TV series Botham on the Fly with guests such as Eric Clapton, Mike Atherton and Chris Tarrant.

He currently lives in Almeria in Spain, owning two houses there while his daughter Sarah owns a restaurant and wine bar in the town.

After leaving school early, he played for Somerset, making his first class debut in 1974, aged 18. After 12 seasons of playing for Somerset, he resigned in 1986, in protest at the sacking of his West Indian friends Sir Vivian Richards and Joel Garner. He later played for Worcestershire, Durham and Queensland in Australian cricket. He gained his Test debut for England in 1977. He went on to an illustrious international career. He took 383 wickets at an average of 28.4 and scored 5,200 runs at an average of 33.54. The figures on their own are not spectacular, but Botham frequently made a big impact in important games. He could also score at a quick rate and some of his innings were memorable, even if didn’t score a century. He had tremendous power and could hit the ball out of the ground, though he also had a good technique. His swing bowling was effective for his ability to move the ball – even when his pace slowed down in later years, he could make a big difference.

He was England’s captain for 12 Tests in 1980 and 1981. As captain of the England XI, Botham was unsuccessful. His tenure was brief and under his captaincy the team achieved no wins, 8 draws and 4 losses. In his defence, 9 of his matches as captain were against the best team of that era, the West Indies, who won 12 out of the next 13 Tests played against England. He was renowned as a big-hitting batsman, though with a classical technique of playing straight, and as a fast-medium paced swing bowler who was very effective when atmospheric conditions favoured his style. Ian Botham was always a big character in the team, he became as famous for his on-field exploits as his off-field exploits. He had quite a few run ins with the more ‘stuffy establishment.’ – especially the members at Lords. For example, he got into trouble for smoking cannabis in 1986. He also fell out with other players, notably Geoff Boycott – who Botham once famously ran out for scoring too slowly.

In 1980, Ian Botham was made captain of England. However, it was not a success. He lost form, England didn’t do well, and not everyone in the dressing room was enamoured of Botham’s style. After first two tests in the Ashes series of 1981, Botham resigned the captaincy, with England trailing 1-0 and struggling to have any hope of winning series. In the second test at Lord’s Botham scored a pair.

In the third test at Headingley, Brearley was made captain. The test got off to a bad start for England. Australia scored a big innings total 401-9. But, in reply, England could only make 174 – with Botham top scoring on 50 not out. In the follow on on Saturday, England’s top order again failed. On Saturday evening, bookmakers offered odds of 500-1 for England to win. On Sunday, Botham came to the crease when England were 105 for 5. But, England then lost Boycott and Bob Taylor, leaving England on 135-7. Defeat looked inevitable. No-one in the ground expected England to have the faintest chance. But, as Graham Dilley joined Ian Botham in the middle, Botham let fly and played an innings of superb quality and attacking flair. Hitting the ball over the ground, he accelerated to 149 not out. He was ably supported by the England tail (Dilley scored 56) and Chris Old (29).

Still England’s lead was just 129. There was only a feint chance of winning, but Botham had restored England’s pride. However, Bob Willis bowled with exceptional talent to bowl out the Australians for 111. Willis finished with 8 for 43. England had won a classic game by just 18 runs. It was only the second team to win a game after following on. Botham was the hero.

It was a huge psychological boost for England. At the time, the economy was in deep recession, and the headlines about England cricket and been unrelentingly critical, but this turned the whole mood of the nation. A packed Headingley celebrated the most unlikely of wins.

In the next test match, England won by 29 runs – helped by a spell of bowling by Botham where he took 5 wickets for 1 run.

England won the ashes in the Old Trafford test, where Botham again was man of the match with a peerless 118, which included six sixes, including two off the fast bowler Lillee. England won the final test at the Oval to take the series 3-1. Botham was named man of the series, scoring 399 runs and taking 34 wickets. He was awarded BBC Sports Personality of the year in 1981.

An occasional professional footballer as well as cricketer, Botham had to choose very early in his career whether to play football or cricket. During March 1980, he joined the football club Scunthorpe United, where he played as a centre half and made 11 appearances in the Football League. Botham also had a spell at Yeovil Town. Whilst with Yeovil, Botham made an appearance for the Football Association XI (a representative side for non-League footballers) against the Northern Football League at Croft Park during the 1984–85 season.

Botham enjoys game shooting and owns a grouse moor: this has resulted in a high-profile dispute with the RSPB. In August 2016, he called for Chris Packham to be sacked by the BBC as part of a campaign funded by the grouse shooting industry, after Packham had highlighted the industry’s involvement in the illegal killing of endangered species of birds of prey. 2014 Botham was selected to deliver the Marylebone Cricket Club’s Spirit of Cricket Cowdrey Lecture at Lord’s.

2010 Botham was awarded an Honorary Doctor of Science by the University of Lincoln.

2008 Botham was awarded an Honorary Doctorate in Sports Science by Leeds Metropolitan University.

2008 Botham was awarded an Honorary Doctor of Laws by the University of Bath.

2007 In the Queen’s Birthday Honours Botham was appointed as a Knight Bachelor “in recognition of his cricket achievements and his sustained efforts in raising money for Leukaemia research” (see above). Botham was invested by HM The Queen at Buckingham Palace on 10 October 2007

1992 Botham was appointed an Officer of the Order of the British Empire (OBE) for services to cricket and for his charity work in the Queen’s Birthday Honours.

1988 Awarded Pipe Smoker of the Year

1978 Elected one of Wisden’s Five Cricketers of the Year.