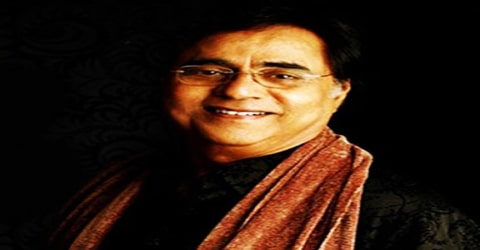 One of the most famous Ghazal singers of the modern times in India, Jagjit Singh was born on 8 February 1941 in Sri Ganganagar, Rajasthan, India (then Bikaner State). He sang in numerous languages and is credited for the revival and popularity of ghazal, an Indian classical art form, by choosing poetry that was relevant to the masses and composing them in a way that laid more emphasis on the meaning of words and melody evoked by them. In terms of Indian Classical music, his style of composing and Gayaki (singing) is considered as Bol-pradhan, one that lays emphasis on words.

Born into a middle-class Sikh family, Singh was a child prodigy in music; his father identified his talent and encouraged him to learn classical music. After his graduation, he moved to Mumbai to pursue a career in the music industry and experienced his fair share of struggle in the industry to find work. In the meantime, he married Chitra, another singer, and together they started singing compositions. But it was not until after seven years of marriage when the couple’s first fruitful album was released. The magic of the duo’s voice, their blissful romance and the utter intensity of their ghazals enthralled everyone. Thereafter the couple worked both on solo and joint musical projects and performed concerts worldwide. He achieved incredible success through his soulful and mesmerizing voice in several genres of singing ranging from romantic melodies to sad compositions and devotional hymns.

After Ravi Shankar, Singh is considered one of post-colonial India’s most important and recognizable artists, and certainly its best-selling due to his soundtracks and scores for film and television, and his musical interpretation of the works of poets. Including scores, he recorded over 60 albums during his lifetime. He is known not only for his ghazals and singing in several languages but also for Indian light classical music, including thumri and bhajan.

However, his personal life was deeply affected when his only son died at a young age, after which his wife gave up singing. But he continued to sing and his songs only gained more popularity with each passing day. A spellbinding singer and a great person, Singh established himself as one of India’s most influential artists and his melodies continue to communicate with the deepest human emotions. Jagjit Singh, by name of Jagmohan Singh Dhiman, popularly known as “The Ghazal King” or “King of Ghazals”, was born on February 8, 1941, in Sri Ganganagar, Bikaner princely state, India, to Sardar Amar Singh Dhiman, a government official, and his wife, Sardarni Bachchan. He was one of seven children of his parents.

Educated initially at Khalsa High School and Government College in Sri Ganganagar, Singh obtained an arts degree from DAV College in Jalandhar. There he began his professional career in 1961 by undertaking singing and composing assignments at All India Radio’s (AIR) Jalandhar station. Later, he studied to obtain a post-graduate degree in history from Kurukshetra University in Haryana.

With a natural flair for music which his father spotted in him, he was encouraged to learn music from renowned classical musicians such as ‘Pandit Chaganlal Sharma’ and ‘Ustad Jamaal Khan’ in the early years of his life. Throughout his teenage years, he performed on stage and composed music. Although his father, who was a government employee, had hoped that he would become an engineer, Singh pursued his passion for music relentlessly. Like all parents in Indian middle-class families, his father aspired for him to become a bureaucrat. However, he also encouraged Singh and his siblings to learn music.

In March 1965, and without the knowledge of his family, Singh moved to Bombay, where there were many opportunities for music artists because of the Bollywood film industry. He obtained work initially as a singer of advertising jingles and later progressed to playback singing. In 1967 Jagjit Singh met Chitra Dutta, a married Bengali singer. Soon she divorced her first husband and married him in December 1969. They performed together in many critically as well as commercially successful albums. Following the birth of their son, Vivek, the couple performed as a singing duo but it was not until the 1976 release of the album The Unforgettable that they found significant and surprising success.

In 1990, Vivek (Jagjit Singh and Chitra’s son) died in a road accident at the age of 20. This came as a profound shock to Jagjit and Chitra Singh. They gave up music for a full year after the death. At the end of that period, Jagjit returned slowly to the music, but Chitra announced her retirement and declared that she would not sing or record any more songs. Jagjit Singh moved to Mumbai in 1965 to try to establish himself as either a singer and/or composer in the massive Bollywood industry. It was hardly an auspicious beginning: he spent years writing and singing advertising jingles and eventually gained a slot doing playback singing in films. He met his future wife in 1967; they were married two years later. Though they performed as a duo, they were unable to record together until the middle of the ’70s. Their debut album, The Unforgettables, was issued by HMV in 1977.

In 1976, Singh released his first successful LP titled ‘The Unforgettable’, along with his wife, Chitra. The album was an instant hit. Subsequently, the singing duo recorded albums such as ‘Biraha Da Sultan’ (1978) and ‘Come Alive in a Concert’ (1979). In later years, the couple released many more successful albums including ‘Ecstasies’ (1984), ‘A Sound Affair’ (1985) and ‘Passions’ (1987).

Though they only sang together on two cuts, the single “Baat Niklegi” became their first hit; it was celebrated for its juxtaposition of modern arrangements and the classical ghazal form. Though the following ghazals issued a year later did well, they paled in comparison to 1979’s double album Come Alive in a Live Concert with ‎Jagjit and Chitra Singh and 1981’s Live in Concert at Wembley. 1981’s Saath Saath and 1982’s Arth both composed by Singh elevated their reputation to that of living legends. They are listed among HMV’s best-selling soundtrack recording artists of all time. Singh’s other film scores included Premgeet, Tum Bin, Sarfarosh, Dushman, and Tarkeeb.

Around 1970s, the world of ghazals was dominated by renowned names like Noor Jehan, Malika Pukhraj, Begum Akhtar, Talat Mahmood, and Mehdi Hassan. Jagjit Singh made the efforts to come with his first album titled “The Unforgettable”, which was a collection of semi-classical Indian music. The different melody and freshness in Jagjit’s voice appealed to all and he was recognized by the industry. Though he was scorned by many critics, it did not deter him from carving a nice for himself. The album sold numerous copies and was a hit with listeners. Although Jagjit continued to work and to have success after Chitra withdrew from public life he, too, was affected by the death of Vivek. The Guardian notes that he “suffered from deep depression and his anguish was often evident in his live performances.” Aside from occupying himself with solo projects, which he performed in several languages, he collaborated with Lata Mangeshkar on an album titled Sajda, an Urdu word meaning “prostration”. Singh’s work in film encompassed playback singing for productions such as Arth, Saath Saath, and Premgeet. He composed all of the songs for the latter, as well as for the TV serial Mirza Ghalib that was based on the life of the eponymous poet, Mirza Ghalib.

During the early ’90s, they released an album named Beyond Time, which was experimentation with different sounds and music. It conveyed a feeling that was beyond space and time and logical explanation. Sadly, around this time, their only son Vivek met with an accident and died at the young age of twenty-one. It was a huge jolt for the couple and also all their fans and well-wishers all over the world. After the album “Someone Somewhere”, Chitra quit singing. The songs are emotionally very powerful and moving since they connect with the personal loss of the couple. However, Jagjit Singh continued to sing and his songs have only gained more popularity with each passing day. His later albums named Hope, In Search, Insight, Mirage, Visions, Kahkashan (Galaxy), Love Is Blind, Chirag (Lamp), etc. have made him the top Ghazal singer in the country and a favorite among fans. An album with Lata Mangeshkar named “Sajda” (Offering) was a hit and sold innumerable copies. It was a classic Ghazal album. Jagjit Singh did not limit himself to just Hindi songs and has also sung many Punjabi songs. His bubbly and vibrant Punjabi songs are very popular and are very pleasant to hear.

Singh also began to work extensively in television during the ’90s. He composed songs, serial music, and scores for Heena, Neem Ka Pead, and Hello Jhindagi, to name a few. He began teaching and mentored many Indian popular singers including Abhijeet Bhattacharya, Ashok Khosla, Ghanshyam Vaswani, Siza Roy, Talat Aziz, and Vinod Sehgal. During the era, Singh discovered and mentored the prolific Indian playback singer Kumar Sanu, and continued to perform, record, and compose songs and film scores. In 1998, he was given the Sahitya Academy Award, a literary honor for popularizing the work of poet Mirza Ghalib with his score and soundtrack for the television series of the same name. In 2003, Jagjit Singh was given the Padma Bhushan, a high-level civilian award by the Indian government. He received a Teacher’s Lifetime Achievement Award in 2006.

Jagjit Singh was posthumously awarded the Rajasthan Ratna in 2013, the highest civilian award by the state government of Rajasthan.

Jagjit Singh toured the UK in 2011 and was due to perform with Ghulam Ali in Mumbai but suffered a brain hemorrhage on 23 September 2011. He died on October 10, 2011, in Mumbai, Maharashtra, India due to cerebral hemorrhage after being in a coma for two weeks. He was cremated the following day at Chandanwadi Crematorium near Marine Lines in Mumbai. A number of tributes have been paid to Singh after his death, and some tried to cash in on his popularity, which was criticized by his wife.

One of his most celebrated works is the album ‘The Unforgettable’ (1976) which features compositions such as ‘Baat Niklaygi Toh’ and ‘Sarakti Jaye Hai’. The album was an immediate success and established him and his wife, as remarkable Ghazal singers. In 1988, he composed all of the songs for ‘Mirza Ghalib’, a TV series based on the life of the eponymous poet, Mirza Ghalib, featuring some of his evergreen tracks such as ‘Hazaron Khwahishen Aisi’ and ‘Dil-e-Nadaan Tujhe’.

Jagjit Singh has also sung many songs for Hindi movies. Popular films include Arth, Saath Saath, Premgeet, Tum Bin, Sarfarosh, Dushman and Tarkeeb. Jagjit Singh has proved himself as a genius as he brings out the true meaning of Mirza Ghalib’s poetry by singing them as melodious Ghazals. The album can be easily called a masterpiece. His transition from the ’90s till date has been absolutely marvelous as he has moved towards much more melodious and meaningful Ghazals. The quality of his voice has only become better. Besides movies, he has sung many devotional songs also that are very peaceful to hear. Jagjit Singh is any day the undisputed Ghazal artist in modern times.

A biography of Singh, entitled Beyond Time based on about 40 hours of interviews with him, was released in 2012. It was transcribed and edited by Ashrani Mathur. A biopic documentary by the name of Kaagaz Ki Kashti has been made on the life journey of Jagjit Singh, who broke through the norms and revolutionized the Ghazal scenario. The film traces the struggle and stardom in his musical career, the love & loss in his personal life and the scope and limitations in the music scenario of the times. The film directed by Brahmanand S Singh is currently available on Amazon Prime video in India. It is expected to see a worldwide release soon.

Google celebrated him with a home page doodle that same year. The popularity of Singh’s music has only spread since his death. His recordings and compilations have been reissued numerous times throughout Europe and Asia.