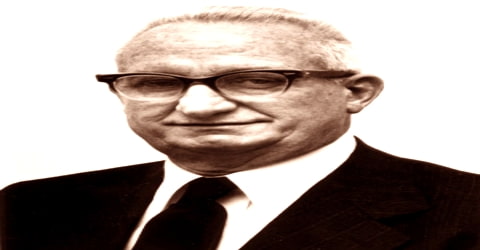 An American physicist who won a share of the Nobel Prize for Physics in 1975 for his part in determining the asymmetrical shapes of certain atomic nuclei, Leo James Rainwater was born on December 9, 1917, in Council, Idaho, the son of a former civil engineer who ran the local general store, Leo Jaspar Rainwater and his wife Edna Eliza née Teague.

Rainwater also worked on the Manhattan Project that led to the development of first atomic bombs. He preferred to be called by his middle name and throughout his life, he was referred to as such. He lost his father when he was barely a year old and thereafter his mother moved to California. At school, he displayed his talents as an extremely gifted student of science and was particularly good at mathematics, chemistry, and physics. Due to his natural gifts in science, he fared well in a chemistry competition run by the California Institute of Technology and was admitted to the Institute on the basis of the competition. He graduated in physics and then went on to complete his masters’ degree at Columbia University, where he worked for the rest of his life. Apart from his work on the atomic nuclei, his studies also contributed to the scientific understanding of X-rays.

Rainwater received the Ernest Orlando Lawrence Award for Physics in 1963 and in 1975 was awarded the Nobel Prize in Physics, “for the discovery of the connection between collective motion and particle motion in atomic nuclei and the development of the theory of the structure of the atomic nucleus based on this connection”.

James Rainwater, in full Leo James Rainwater, was born in Council, Idaho, United States, on 9th December 1917, to Leo Jaspar Rainwater and Edna Eliza. His father was a civil engineer by training but moved to Council from California in order to run a general store.

At high school Rainwater excelled in mathematics, chemistry, and physics and was admitted to the California Institute of Technology on the strength of a chemistry competition. He studied physics at the institute and in 1939; he graduated with a Bachelor of Science degree. Subsequently, he joined Columbia University for his post-graduate education and two years later received his Master of Arts degree.

In March 1942, Leo James Rainwater married Emma Louise Smith. The couple had four children including three sons, James, Robert and William and a daughter Elizabeth Ann who died at age nine of leukemia.

At Columbia James Rainwater studied under Isidor Isaac Rabi, Enrico Fermi, Edward Teller, and John R. Dunning. Fermi was engaged in neutron moderator studies that would lead to the construction of the first nuclear reactor, while Dunning and Eugene T. Booth had built Columbia’s first cyclotron, in the basement of the Pupin Physics Laboratories. Rainwater received his Master of Arts in 1941. For his Doctor of Philosophy thesis on “Neutron beam spectrometer studies of boron, cadmium, and the energy distribution from paraffin”, written under Dunning’s supervision, he built a neutron spectrometer and developed techniques for its use.

Educated at the California Institute of Technology, Pasadena, and Columbia University, where James Rainwater received his doctorate in 1946, Rainwater worked on the Manhattan Project to develop the atomic bomb during World War II.

The Manhattan Project was the Allied effort during World War II to develop atomic bombs. The Substitute Alloy Materials (SAM) Laboratories’ primary task was the development of gaseous diffusion technology for uranium enrichment, to produce fissile uranium-235 for use in atomic bombs. Rainwater worked with William W. Havens, Jr. and Chien-Shiung Wu, mostly on studies of neutron cross sections, using the neutron spectrometer. After the war, a dozen papers by Dunning, Havens, Rainwater, and Wu would be declassified and published. So too was his thesis, published in the Physical Review in two parts with Havens’s thesis, and he was awarded his doctorate in 1946.

Following the end of the Second World War, Rainwater went back to academics and continued to work in the capacity of an instructor at Columbia University. He started working on his most important project in 1949 when he started research on his theory that the nuclei of all atoms are not spherical in shape. Danish scientist Aage Bohr confirmed his theories through experiments and subsequently, Ben Mottelson helped him in publishing his findings. There were three papers in total.

Rainwater went on to publish a theoretical paper on the subject in 1950. Aage Bohr who at the time shared an office with Rainwater embarked on an experiment to verify Rainwater’s claim. Bohr worked with Ben Mottelson and in 1952 and 1953, published papers to confirm the theory. Rainwater felt that his model was overlooked.

With funding from the Office of Naval Research, Rainwater built a synchrotron, which became operational in 1950, at the Nevis Laboratories, on an estate on the Hudson River at Irvington, New York, willed to Columbia University by the DuPont family. He became a full professor in 1952 and was the director of Nevis Laboratories from 1951 to 1954 and again from 1957 to 1961. He worked with his student Val Fitch on studies of muonic atoms, atoms where an electron is replaced by a muon. After 1965, he worked on turning the Nevis synchrotron into a meson facility. When a reporter rang in 1975 to inform him that he had won the Nobel Prize in Physics, he initially thought that it was for his work on muonic atoms. Several hours passed before he discovered that it was for his work on atomic structure, the Nobel Prize is shared with Bohr and Mottelson.

In 1983, Rainwater became a Michael I. Pupin Professor of Physics at Columbia. He collapsed after a lecture at the Pupin Laboratories in 1985 but was revived by a student who knew how to administer CPR. In declining health, he retired and became a professor emeritus in February 1986.

In 1975, James Rainwater shared the Nobel Prize in Physics with Aage Bohr and Ben Mottelson “for the discovery of the connection between collective motion and particle motion in atomic nuclei and the development of the theory of the structure of the atomic nucleus based on this connection”.

James Rainwater died from cardiopulmonary arrest at St. John’s Riverside Hospital in Yonkers, New York on May 31, 1986. He was survived by his wife, three sons and half-brother George.

Rainwater’s most significant work was his theory on the shape of the nuclei of different atoms since it managed to dispel the idea that all atomic nuclei were spherical in shape. He shared the Nobel Prize in Physics for that.