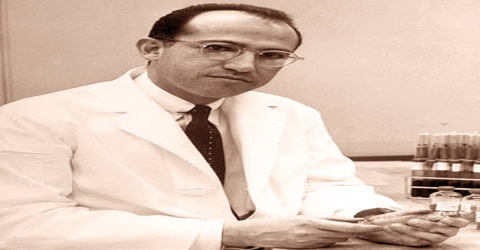 An American physician and medical researcher who developed the first safe and effective vaccine for polio, Jonas Salk was born on October 28, 1914, in New York City, New York, the U.S. He attended the City College of New York and New York University School of Medicine, later choosing to do medical research instead of becoming a practicing physician. In 1939, after earning his medical degree, Salk began an internship as a physician-scientist at Mount Sinai Hospital. Two years later he was granted a fellowship at the University of Michigan, where he would study flu viruses with his mentor Thomas Francis, Jr.

There are some people who have such a profound effect on the world at large that they are immortalized in the heart and minds of generations after generations of people. In that regard, Jonas Edward Salk is certainly among that select group of people due to his contribution to medical sciences that went on to improve the lives of millions of people all across the world. He was an American medical scientist who shunned a lucrative career as a doctor and instead devoted his best years to medical research. Jonas Salk was also a virologist of the highest reputation and was responsible for inventing the vaccine for one of the most damaging medical conditions that can surface due to a virus. Salk enjoyed a long and fruitful career as a researcher, which brought him recognition from some of the leading scientific research organizations in the world. However, something that has made Salk a legendary individual in the field of scientific research is the fact that he gave away his greatest discovery for free and according to experts, he could have been a millionaire many times over if he had decided to cash in on it like so many others. Read on to know more about the life of this eminent virologist.

In 1960, Salk founded the Salk Institute for Biological Studies in La Jolla, California, which is today a center for medical and scientific research. He continued to conduct research and publish books, including Man Unfolding (1972), The Survival of the Wisest (1973), World Population and Human Values: A New Reality (1981), and Anatomy of Reality: Merging of Intuition and Reason (1983). Salk’s last years were spent searching for a vaccine against HIV. His personal papers are stored at the University of California, San Diego Library. Jonas Salk, in full Jonas Edward Salk, was born to Polish immigrants Daniel Salk and Dora Salk in New York on October 28, 1914. Jason was the eldest of the three boys in the family; his youngest brother Lee Salk went on to become a child psychiatrist. The family moved to the Bronx, New York, shortly after Jonas’s birth. As a child, he was thin and small and did not do well at sports, although he was an excellent student. With his mother’s encouragement, he had a sense as a child that when he grew up he would “make a difference” by doing something significant.

Jonas Salk attended a high school for gifted children in New York City and then enrolled at City College of New York where he received a degree in chemistry in 1934. Salk then was accepted to New York University to study medicine. There he showed remarkable academic prowess and the curiosity that is so crucial for future researchers. His intention was always to become a medical researcher rather than a medical practitioner and he graduated with his doctorate in 1939. At NYU he got the opportunity to work with well-known researcher Thomas Francis Jr.

Salk worked at New York’s Mount Sinai Hospital from 1940 to 1942, when he went to the University of Michigan. There he helped develop influenza (flu) vaccine. In 1944 he was appointed research associate in epidemiology (the study of the causes, distribution, and control of disease), and in 1946 he was made assistant professor.

Jonas Salk got married to Donna Lindsay right after he became an MD in the year 1939. The couple had 3 children, all boys named Peter Salk, Darrell Salk, and Jonathon Salk. They got a divorce in the 39th year of their marriage in 1968.

In the year 1970, Salk remarried and his second wife was the famous Francoise Gilot, Pablo Picasso’s one time girlfriend. In the year 1942, Jonas teamed up with, his longtime collaborator in medical research endeavors, Thomas Francis for a short stint at the ‘University of Michigan’. It was during this particular stint that Salk decided that he was going to be a virologist. Although Salk did serve a residency at the ‘Mount Sinai Hospital’ and continued with his research, he found it difficult to get a suitable job due to Jewish quotas at different universities. Finally, he accepted an offer to become the head of virology at the ‘University of Pittsburgh’ in the year 1947.

The following year Salk was funded to ascertain the number of types of poliovirus. Polio (or infantile paralysis) is an infectious disease caused by the poliovirus which results in muscle weakness, especially in the legs. Over the next seven years, Salk discovered that there were three types of poliovirus and extended his research to develop a vaccine. Summertime in America in the 1940s and ’50s was a time of concern and worry for many parents as this was the season when children by the thousands became infected with the crippling disease, from which not everyone recovered.

In 1948, Harry Weaver, the director of research at the National Foundation for Infantile Paralysis, contacted Salk. He asked Salk to find out if there were more types of polio than the three then known, offering additional space, equipment and researchers. For the first year, he gathered supplies and researchers including Julius Youngner, Byron Bennett, L. James Lewis, and secretary Lorraine Friedman joined Salk’s team, as well. As time went on, Salk began securing grants from the Mellon family and was able to build a working virology laboratory. He later joined the National Foundation for Infantile Paralysis’s polio project established by President Franklin D. Roosevelt.

In the mid-20th-century hundreds of thousands of children were struck by the disease every year. Working with scientists from other universities in a program to classify the various strains of poliovirus, Salk corroborated other studies in identifying three separate strains. He then demonstrated that killed virus of each of the three, although incapable of producing the disease, could induce antibody formation in monkeys.

It was in the year 1952 that years of painstaking research, on the devastating virus, bore fruit as the initial tests were conducted. It was three years later that the polio vaccine became available across the United States. Salk continued to work in research at ‘University of Pittsburgh’ and held the position as professor in the fields of experimental medicine and bacteriology among others.

Testing began in 1950, and the preliminary report on the vaccine’s effectiveness was published in the Journal of the American Medical Association in 1953. National field trials were held in 1954, and in 1955 the vaccine was determined safe for general use. The Salk vaccine is made by cultivating (growing) three strains of the virus separately, then killing it by applying a strong chemical called formaldehyde. Tests are then performed to make certain the virus is dead. A series of three or four injections are required to make someone immune.

Extensive publicity and fear of polio led to much-increased funding, $67 million by 1955, but research continued on dangerous live vaccines. Salk decided to use the safer ‘killed’ virus, instead of weakened forms of strains of polioviruses like the ones used contemporarily by Albert Sabin, who was developing an oral vaccine. After successful tests on laboratory animals, on July 2, 1952, assisted by the staff at the D.T. Watson Home for Crippled Children, Salk injected 43 children with his killed-virus vaccine. A few weeks later, Salk injected children at the Polk State School for the retarded and feeble-minded. In 1954 he tested the vaccine on about one million children, known as the polio pioneers. The vaccine was announced as safe on April 12, 1955.

Acceptance of the vaccine was not without problems. Salk was criticized because a glaring Hollywood-like promotion was undertaken for the vaccine. Also, some medical colleagues favored a live-virus vaccine. The live-virus vaccine developed by Dr. Albert Sabin (1906-1993) contained a mutant (altered, different) form of the poliovirus, called an avirulent virus. This means it was not able to harm the body’s defenses. The live-virus vaccine had advantages over the killed-virus vaccine. It could be administered orally (through the mouth) rather than by injection, and one dosage gave permanent immunity. The biggest problem with the Salk vaccine was that improper production of the vaccine by some drug companies resulted in the vaccine being contaminated with live poliovirus. Many hundreds of children died or became extremely ill because of this. Salk, during his polio researches, was made research professor of bacteriology at Pittsburgh, Pennsylvania, (1949–1954) and professor of preventive medicine (1954-1957). In 1957 he was named Commonwealth professor of experimental medicine.

On April 12, 1955, the vaccine was released for use in the United States. In the following years, the incidence of polio in the United States fell from 18 cases per 100,000 people to less than 2 per 100,000. In the 1960s the second type of polio vaccine, known as oral poliovirus vaccine (OPV) or Sabin vaccine named for its inventor, American physician and microbiologist Albert Sabin was developed. OPV contains the live attenuated (weakened) virus and is given orally. In the years after his discovery, many supporters, in particular, the National Foundation “helped him build his dream” of a research complex for the investigation of biological phenomena. The ‘Salk Institute’ for Biological Studies opened in 1963 in California carrying out research on diseases such as multiple sclerosis and cancer. Salk remained a director until 1975 and he then became its founding director. Salk continued working on research in the 1980s, studying AIDS and working on a vaccine against HIV.

The ‘Lasker Award’ has been awarded to outstanding achievers in the field of medical science since the year the 2nd World War ended and in 1956 Jonas Salk was given the award. Among his many honors was the Presidential Medal of Freedom, awarded in 1977.

The ‘California Hall of Fame’ has inducted plenty of eminent personalities over the years and in the year 2007, Governor Arnold Schwarzenegger honored Salk with a membership.

Jonas Salk died from heart failure at the age of 80 on June 23, 1995, in La Jolla, and was buried at El Camino Memorial Park in San Diego.

A monument at the Institute with a statement from Salk captures his vision, “Hope lies in dreams, in imagination and in the courage of those who dare to make dreams into reality.”

Jonas Salk worked in plenty of highly important projects throughout his career but his most important and path-breaking work was the invention of the polio vaccine that went on to save the lives of millions across the world. Salk’s biggest legacy will certainly be his work as a scientist who produced the polio vaccine that he made available throughout the world and saved millions of lives all over.