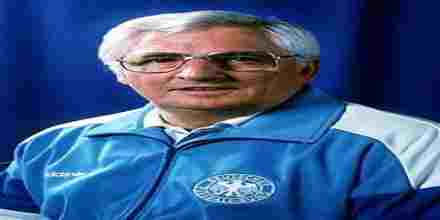 Jupp Derwall (Josef Derwall) was born on March 10, 1927, Würselen, Germany, and died June 26, 2007, Sankt Ingbert, Germany. He was an German association football player (soccer) and manager who during his tenure as national coach (1978–84), guided West Germany to 45 wins (including a record 23 straight), 11 losses, and 11 ties; the 1980 European championship title; and the final of the 1982 World Cup, in which the team lost to Italy. After World War II, Derwall played professionally for Oberliga West, Alemania Aachen, and Fortuna Düsseldorf, and he made two appearances in 1954 with the national team.

His hairdo provided the basis for his nickname “Chieftain Silver Curl” (Häuptling Silberlocke).

Derwall’s first major tournament as manager was Euro 80 in Italy, and under his guidance Germany won the championship in impressive fashion, winning four out of their five games and finishing with the tournament’s top scorer in Klaus Allofs.

Notwithstanding this setback, Derwall remained a highly regarded coach and Germany were still counted among the favourites for Euro 84, but their performance in France was not impressive and Derwall’s team were eliminated in the first round. Public opinion in Germany turned against Derwall rapidly. It reached an absolute low point when people would begin to yell angrily at Derwall had they spotted him in public. Derwall in the end of what amounted to a public campaign was forced to resign his position, being replaced by the hitherto-untested Franz Beckenbauer who acted as team manager.

At the time, Turkish football was not well regarded in Europe, and Turkish clubs had never made any real impression on the international scene. The arrival of Derwall, an internationally respected and experienced coach, changed this perception, and his tenure at Galatasaray is often credited with having helped spark the revival in the fortunes of Turkish football. As well as winning one national championship and one Turkish Cup, Derwall’s time in Istanbul also involved his introducing modern Western European training techniques and tactical ideas to the Turkish game. Therefore, he’s regarded as the revolutionizer of Turkish football. Two of Turkey’s most respected coaches, Fatih Terim and Mustafa Denizli, both trained under Derwall during his time in Turkey, have been quick to praise Derwall’s influence.

Derwall retired from coaching with Galatasaray in 1987 after helping his club become league champions (for the first time since 1973); despite speculation that he might take over as manager of the Turkey national football team, he chose instead to return to Germany and enjoy his retirement. He was happy to see that the spark he lit grew enormously, with Galatasaray reaching the semi-finals of the 1988–89 European Cup (predecessor of the UEFA Champions League) and winning both the UEFA Cup and UEFA Super Cup in 2000.

The midfielder and forward started in 1938 with Rhenania Würselen. Later Derwall played for Alemannia Aachen and Fortuna Düsseldorf in the western division of the five-way split first German league. With Aachen he reached the DFB-Pokal final in 1953 where he scored one goal at the 1–2 defeat at the hands of Rot-Weiss Essen. Five years later he reached the cup final with Düsseldorf, which was lost 3–4 against VfB Stuttgart. After World War II, Derwall played professionally for Oberliga West, Alemania Aachen, and Fortuna Düsseldorf, and he made two appearances in 1954 with the national team. He was also called twice to play for West Germany but was not selected for the squad which won the 1954 FIFA World Cup.

After retiring as a player, Derwall took up coaching first in Switzerland with FC Biel(1959–1961) and FC Schaffhausen (1961–1962). With Fortuna Düsseldorf he once more reached the cup final, then, in 1962, losing to 1. FC Nuremberg 1–2 after extra time. Afterwards he became coach of the regional association of Saarland for six years.

In 1970, he was appointed as successor to Udo Lattek as the German national team’s assistant coach under the legendary Helmut Schön. At the 1972 Summer Olympics he was responsible for the German team, taking it into the last eight.

Derwall served as Schön’s assistant until after the 1978 World Cup. When Schön retired from coaching, also in light of the achievements in the tournament, Derwall was chosen to take his place as manager of Germany. His major rivals for this appointment were his coaching staff colleague Erich Ribbeck and Helmut Benthaus, then manager with the reigning German champions VfB Stuttgart, who received no release from his contract.

Galatasaray gave his name to their training ground after his death.

His work in Turkey was also considered a major contribution to German-Turkish relations and was honoured with an honorary doctorate of the University of Hacettepe in Ankara and the German Cross of Merit 1st Class.