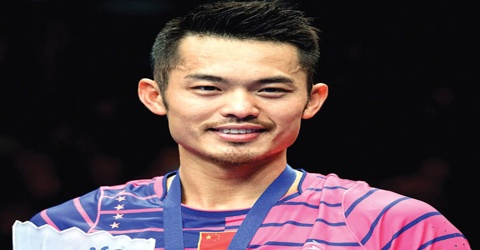 Lin Dan was born on October 14, 1983, in Longyan, Fujian, China. He is a Chinese badminton player considered to be one of the greatest singles players of all time. He had won all nine major titles in the badminton world—Olympic Games, World Championships, World Cup, Thomas Cup, Sudirman Cup, Super Series Masters Finals, All England Open, Asian Games, and Asian Championships—by the time he was 28. Currently he is the only player to have achieved this feat and is therefore considered by many to be the greatest badminton player ever to have graced the sport. Nicknamed as “Super Dan” by Peter Gade, the player undoubtedly lives up to his name. Not only is he a two-time Olympic champion, but also the first men’s singles player to retain the Olympic gold medal by winning in 2008 and defending his title in 2012. Given his stupendous success it comes as no surprise that his fascination with badminton began quite early on in life. Having started playing the sport at five, he turned professional as a teenager. He is well-known for not just his extraordinary playing skills, but also for his fiery temperament and angry outbursts have made him a controversial figure. His flamboyant personality, excellent records on the badminton court, and the “Bad Boy” image make him a very popular sporting figure. Lin Dan was born on 14 October 1983 in Longyan, Fujian, China to Gao Xiuyu and Lin Jianbin. When he was young his parents wanted him to learn piano. But the young Lin Dan was more interested in playing badminton and chose to play the sport when he was only five. He joined the sports troop of the People’s Liberation Army when he was 13 and started playing for China’s national badminton team when he was 18. He became involved with Xie Xingfang, a former world champion badminton player, in 2003. Initially the couple kept their relationship a secret and got engaged in 2010. They got married on 23 September 2012 and the wedding ceremony was held at the Beijing University of Technology.

He and his wife Xie Xingfang had their first child on November 5, 2016. However, later on November 17, 2016, he was reported to have admitted to having an affair while his wife was pregnant. Social media users had purportedly identified the woman as actress and model Zhao Yaqi.

On October 17, 2012, he became the first active Chinese badminton player to accept a master’s degree, which was presented at Huaqiao University. His autobiography, Until the End of the World, was published after he successfully defended his Olympic title at the London 2012 Olympics. Playing as a member of China’s 2002 Thomas Cup squad, he helped his team defeat Sweden, Denmark, and Korea to reach the semifinals. But he could not play in the crucial semifinal which his team ultimately lost.

Lin started the 2003 season with a third round defeat in the All England Open. He reached a final later in the year at the Japan Open but was beaten by his compatriot Xia Xuanze once again. Lin then made his inaugural debut in the World Championships in Birmingham, England. He breezed past Per-Henrik Croona and Przemysław Wacha in the first two rounds, but was beaten by Xia again in his third round match. After the world meet, he was eliminated in the semifinals of the Singapore Open, third round of the Indonesia Open, and second round of the Malaysia Open. However, Lin ended the season strongly by capturing the Denmark, Hong Kong, and China Opens, and finishing runner-up at the German Open.

The year 2004 was a good one for him. He was ranked No. 1 by the Badminton World Federation (BWF) for the first time in February. He won the Swiss Open and also the All England Open. He also reached the semifinal of the Japan Open the same year. His phenomenal success came to a brief halt in late 2004. He lost in the quarterfinals of the Malaysian Open and was ousted early on from the Olympic Games. Lin retained his number one world ranking during 2005, winning his second German and Hong Kong Open titles, as well as the Japan Open, China Masters, and World Cup tournaments. He also helped China recapture the Sudirman Cup when it shut-out both defending champion South Korea in the semifinals and Indonesia in the final.

In 2006, he won six individual titles including the All England Open, Chinese Taipei Open, Macau Open, Hong Kong Open, and Japan Open. He also played in the German Open and the China Open, though in both cases he failed to win the title. He again emerged the winner in the All England championship and was able to clinch the German Open title in 2007. He was a part of the team that played the Sudirman Cup and defeated Indonesia 3-0 to win the tournament. He also became the China Masters champion for 2007. The 2008 season began with a controversial match in which Lin had a dispute with South Korea’s coach in the final of the Korea Open which he ultimately lost. However, the year proved to be an eventful one for him as he won the gold in the men’s singles in the Olympic Games. He was again a part of the team that played in the Sudirman Cup 2009 and guided China to a 5-0 win against England. The Chinese team was in top form and effortlessly won the Cup for the third time in a row. He started the season 2010 with failure to defend the All England Open title by losing in the quarterfinals, and had another quarterfinals exit in the Swiss Open. He only won his first seasonal title in the Badminton Asia Championships, which also marked his first title in the championships.

Lin had his fifth appearance in Thomas Cup. After an easy win against Peru, he won the double encounter against Korea’s Park Sung-hwan in the second group tie and the quarterfinals respectively. In the semifinals, he defeated Lee Chong Wei in straight games to help China reach the final, before outclassing Indonesia for a fourth consecutive title. He managed to win his first ever Asian Games gold medal in November by beating Lee Chong Wei in final, thus becoming the first player to win all of the present major titles available to Asians in badminton, both individual and national team. After 2010 he began suffering problems because of a waist injury. In spite of this, he continued playing well.

In August, he won his fourth World Championships title by beating Lee Chong Wei in final in Wembley Arena, a venue which would host the same competition for 2012 Summer Olympics. This dashed Lee’s hope of becoming the first Malaysian to win a gold medal in the World Championships.

Lin started the year 2012 by losing to Lee Chong Wei in the final of the Korea Open, and a second round defeat in the Malaysia Open. He won his fifth German Open title in March, and his first of the season. He then won the All England Open in March, thus becoming the first man in 33 years to win five titles. In April, Lin withdrew from the semifinals of the Badminton Asia Championships due to a waist injury, and the move also helped his compatriot Chen Jin secure the Olympics berth.

Lin made his only appearance of the year at the Badminton Asia Championships, his first tournament since the London 2012 Olympics. He only reached the third round of the tournament, then had to withdraw due to an injury. Lin Dan was also given a wild card entry for the World Championships in Guangzhou, China due to his ability and popularity; even though his world ranking had not enabled him to qualify. He eventually converted the wildcard into his fifth title of the tournament, by beating his all time rival Lee Chong Wei by forfeit. After seven months absence, Lin, ranked 104th in the World Ranking, returned and took the title in the China Masters and subsequently won the Badminton Asia Championships title. He is a two-time Olympic champion and five-time world champion, and the first and only player to win all nine major titles in the badminton world: Olympic Games, World Championships, World Cup, Thomas Cup, Sudirman Cup, Super Series Masters Finals, All England Open, Asian Games, and Asian Championships. Lin won the Eddie Choong Player of the Year award for two consecutive years in 2006 and 2007.

He also secured the BWF Best Male Player of the Year in 2008.

He was named the Most Valuable Player (MVP) during the 2010 Asian Games in Guangzhou, China.

On January 16, 2011, he was voted as the 2010 best male athlete in CCTV Sports Personality of the Year for his clean sweep in major badminton titles.