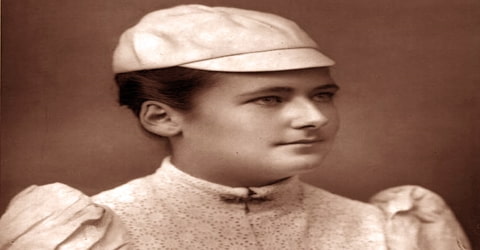 Charlotte “Lottie” Dod was born in Bebington, Merseyside, the United Kingdom on 24 September 1871. Charlotte was best known as a tennis player. She won the Wimbledon Ladies’ Singles Championship five times, the first one when she was only fifteen in the summer of 1887. She remains the youngest ladies’ singles champion.

In addition to tennis, she also competed in many other sports, including golf, field hockey, and archery.

She also won the British Ladies Amateur Golf Championship, played twice for the England women’s national field hockey team (which she helped to found), and won a silver medal at the 1908 Summer Olympics in archery.

The Guinness Book of Records has named her as one of the most versatile female athletes of all time.

Charlotte “Lottie” Dod was born on 24 September 1871in Bebington, Cheshire, the youngest of four children to Joseph and Margaret Dod. They live in the small town of Lower Bebington, England, tucked away in the North West corner of the United Kingdom, five miles from Liverpool, home of the Beatles. The All England Club in London is diagonally southeast, 220 miles away in London. Dod was an English tennis prodigy.

The family was wealthy enough to provide for all members for life; Lottie and her brother Willy never had to work. Besides Willy, Lottie had a sister, Annie, and another brother, Tony, all of whom also excelled in sports. Annie was a good tennis player, golfer, ice skater, and billiards player. Willy Dod won the Olympic gold medal in archery at the 1908 Games, whilst Tony was a regional level archer and a chess and tennis player. The Dod children received a private education from tutors and governesses.

In her childhood, Lottie played the piano, banjo and she was the member of a local choir. When Dod was nine years old, two tennis courts were built near the family’s estate, Edgeworth. Lawn tennis, invented in 1873, was highly fashionable for the wealthy in England, and all of the Dod children started playing the game frequently. Tennis parties were occasionally organized and among the invited guests were future Wimbledon champions Joshua Pim and the brothers Herbert and Wilfred Baddeley. When she was eleven Dod joined the Rock Ferry Tennis Club in Birkenhead.

Lottie and her brother Willy eventually settled in Devon, where they had bought a property at Westward Ho! Just before the Second World War. Their lives centered around the golf club and in 1948 Willy was elected President of the Royal North Devon Club; the following year Lottie was elected the Lady President. In 1950 Lottie returned to London and Willy joined her in her Earl’s Court flat two years later; neither ever married and they spent their last years together. Together with Annie, who was eight years elder, Dod entered her first tennis tournament, the 1883 Northern Championships in Manchester, at age eleven. They had a bye in the first round and lost in the second round of the doubles tournament to Hannah Keith and Amber McCord, but won the consolation tournament.

First off, her tennis attire was eye-catching: Because she was only 15 years, 285 days old, she was allowed to wear clothing that looked like her school uniform. The ensemble consisted of black stockings and shoes, a white flannel cricket cap atop her black hair, and a calf-length dress. She was unencumbered by the eras more confining layered outfits and full length dresses that restricted movements, giving Dod a considerable advantage. She could swiftly run around the court; her lateral and horizontal movements provided mobility her opponents lacked. Tennis historian Elizabeth Wilson, interviewed by The Canberra Times, said that “Dod always spoke up in favor of the right of women to dress in a manner that did not impede their tennis.”

The following year, 1884, Lottie participated in two tournaments, the Northern Championships, played that year in Liverpool, and Waterloo. With Annie, she reached the doubles finals in both tournaments and with Tony she was defeated in the first round of the mixed doubles event at Waterloo. At the Northern Championships in 1885, she came to prominence when she nearly beat reigning Wimbledon champion Maud Watson in the final, losing 6–8, 5–7. Dod would win the doubles event (with Annie). Earlier she had won the first singles title of her career at the Waterloo tournament where she was also victorious in the doubles and mixed doubles events.

In 1887, Lottie defeated the defending Wimbledon ladies champion Blanche Bingley (Hillyard), 6-2, 6-0, winning the final 10 straight games and a second set that lasted 10 minutes. She was only 15 years, 285 days old. The Sheffield Independent reported, “About the ladies’ singles there is little to be said – only five entered as against eight last year. Miss Lottie Dod simply ‘cantered’ through the two rounds in which she had to play. In the final round, she met Mrs. C.J. Cole, formerly, as Miss. Coleridge, well known as a tennis player. In the challenge round she easily vanquished Miss Bingley, who only got two games in the two sets.”

At 5-foot-6 she was tall for the time period. She hit a hard forehand, was the first woman to volley, “smash,” and served underhand, which was a confounding tactic for opponents not skilled in handling such a maneuver. It was not a lady-like game, but Dod made no excuses. “As a rule, ladies are too lazy at tennis,” she once said. “They should learn to run and run their hardest, too, not merely stride. They would find, if they tried, that many a ball, seemingly out of reach, could be returned with ease; but instead of running hard they go a few steps and exclaim, ‘Oh, I can’t’ and stop.”

Lottie Dod’s style of play, then regarded as unorthodox, now seems notably modern. She was perhaps the first player to advocate hitting the ball just before the top of the bounce and to adopt a modern, albeit single-handed, racquet grip. Her groundstrokes were reported by contemporaries to be unusually firmly hit by the standards of the time, but – like many female players of the day, she served underhand and only rarely employed spin.

The Wimbledon final of 1888 was a rematch of the previous year, and Dod, this time defending her title in the Challenge Round, again emerged victorious (6–3, 6–3). During that year she won several doubles and mixed doubles titles with her sister Annie, May Langrishe and Ernest Renshaw.

Dod only entered one open tournament in 1889 (the Northern Championships, which she won), and failed to attend Wimbledon, much to the disappointment of her fans. Together with Annie and some friends, she was on a sailing trip off the Scottish coast and didn’t want to return in time for Wimbledon. This was followed by a complete absence from the game in 1890.

Her record of five Wimbledon titles would not last for long, as Hillyard, after losing in the final to Dod five times, won her sixth title in 1900. Suzanne Lenglen broke Dod’s record of three consecutive singles wins by winning from 1919 to 1923.

Apart from entering women’s tournaments, Dod sometimes also played and won matches against men (who usually played with a handicap), and on one occasion defeated star players Ernest Renshaw and George Hillyard (the husband of Blanche) when doubling with Herbert Baddeley.

Dod was an extraordinary athlete who was accomplished in skiing, archery, field hockey, and golf. She forsook tennis to play golf and in 1904 became the British National Golf champion.

The sport of women’s field hockey was still rather young when Dod took up the game in 1897. She was one of the founding members of a women’s hockey club in Spital. Playing as a central forward, she was soon named the captain of the team. Club matches in which Dod played were won, while losses happened only in her absence.

By 1899, Dod had made it to the captain of the Cheshire county team and represented her club at meetings of the women’s hockey association for the northern counties. She first played in the English national team on 21 March that year, winning 3–1 over Ireland. Both English goals in the 1900 England and Ireland rematch were scored by Dod, securing a 2–1 victory. Dod failed to attend the match against Wales, suffering from sciatica attacks which kept her from sporting for months.

Although she had recovered by 1901, Dod would not play again in national or county matches. All members of the Dod family stopped attending sports events for a while after their mother died on 1 August 1901, and Dod apparently lost her interest in field hockey during that period, although she did occasionally play for Spital Club until 1905. Lottie and her brother William were members of Welford Park Archers, and both of them took part in the Archery competition in the 1908 Olympic Games in London. Lottie won a Silver medal in the Women’s Double National Round, and William won a Gold medal in the Men’s Double York Round. In 1910, Dod came close to winning the Grand National, which would have made archery the third sport in which she became a national champion. Both Lottie and her brother William led after day one but moved down to second on the final competition day. After the Welford Archers were disbanded in late 1911, the Dods’ interest in archery faded, meaning the end of Lottie Dod’s long competitive sports career.

Dod helped establish a ladies’ golf club at Moreton in 1894 and entered that year’s National Championships (match play) at Littlestone (Kent). She was eliminated in the third round, but Dod’s interest in the sport grew, and she became a regular competitor in the National Championships and other tournaments for the next few years. In 1898 and 1900 she reached the semi-finals of the National Championships but was defeated narrowly both times. In 1900, she also played in an unofficial country match against Ireland, which the English won 37–18.

Dod did not compete in golf in 1901, and hardly entered major tournaments in the next two years, but she did play in the 1904 British Ladies Amateur, held at Troon. She qualified for the semi-finals for the third time in her life and won it for the first time. Following her victory, Dod sailed to Philadelphia, where she had been invited by Frances C. Griscom, a former American golf champion, to attend the U.S. Women’s Amateur as a spectator. Upon arrival, Dod found out the tournament regulations had been changed to allow for non-Americans to compete, and she was requested to compete. Her loss in the first round was a disappointment, but Dod persuaded several Americans to come and play in the British championships the following year.

In the week before these 1905 championships, three international matches were planned, starting off with the first British-American international match. Dod was the only British player to lose a match, as the United Kingdom won 6–1. Dod then played for the English team in a 3–4 defeat against Scotland and a 4–3 win over Ireland, although she lost both her matches. Dod was then eliminated in the fourth round of the National Championships. It was to be her last appearance in golf.

Dod was elected to the International Tennis Hall of Fame in 1983.

The Guinness Book of Records has named her as the most versatile female athlete of all time, together with track and field athlete and fellow golf player Babe Zaharias.

Dod then lived in London and Devon, and she never failed to attend the Wimbledon Championships until she was in her late eighties. After her brother Willy died in 1954, she lived in several nursing homes on the English south coast, eventually settling at the Birchy Hill Nursing Home in Sway, Hampshire. There she died, unmarried, 27 June 1960 at age 88, passing away while listening to the Wimbledon radio broadcasts in bed.