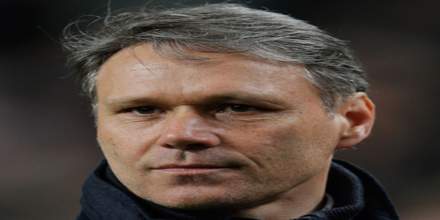 Marco van Basten, by name of Marcel van Basten was born on October 31, 1964, in Utrecht, Netherlands. He was a Dutch football (soccer) player and coach who was a three-time European Player of the Year (1988, 1989, and 1992) and the 1992 Fédération Internationale de Football Association (FIFA) World Player of the Year.

He led the Dutch league in scoring for four consecutive seasons with AFC Ajax, then won three Ballon d’Or Awards with Italy’s AC Milan. His career cut short at age 30 by an ankle injury, van Basten went on to serve as the Dutch national team coach and manager of Ajax.

Van Basten joined the Dutch superpower Ajax in 1981, and he made his debut for their first-division side in 1982. The prolific striker led the Eredivisie (the top Dutch football league) in goals scored for four consecutive seasons (1983–84 through 1986–87), and he was the top European goal scorer during the 1985–86 campaign.

Playing for the Netherlands, Van Basten won, and was named player of the tournament, at UEFA Euro 1988, scoring five goals that included a memorable volley in the final against the Soviet Union. At the club level, he won three Eredivisie titles and the Cup Winners’ Cup with Ajax, and three Serie A titles and two European Cups with Milan.

Known for his close ball control, attacking intelligence and spectacular strikes and volleys, Van Basten was named FIFA World Player of the Year in 1992 and won the Ballon d’Or three times, in 1988, 1989 and 1992. In 1999, he was ranked sixth in the FIFA Player of the Century internet poll, tenth in the European player of the Century election held by the IFFHS and 12th in the IFFHS’ World Player of the Century election. He was also voted eighth in a poll organised by the French magazine France Football, consulting their former Ballon d’Or winners to elect the Football Player of the Century. In 2004, he was named by Pelé in the FIFA 100 list of the world’s greatest living players. In 2004, a poll for the 100 greatest Dutch people was held in the Netherlands: Van Basten ranked number 25, the second highest for a football player, behind Johan Cruyff. In 2007, Sky Sports ranked Van Basten first on its list of great athletes who had their careers cut short.

Marco was unrivalled in the Dutch Eredivisie, unstoppable to the defenders and lethal to the goalies. Being four times the top scorer in domestic league, Van Basten also won the Golden Boot Award in 1986 with 37 goals in only 26 matches! During his rip-roaring stay in Ajax Marco scored 151 goals, appearing in 172 games and that outstanding performance was sealed with the victory in the Cup Winner’s Cup. As befits for a champion, he found the way to the net in the final itself as well.

Regarded as one of the greatest strikers of all time, Van Basten was renowned for his clinical finishing, with a penchant for scoring acrobatic goals. His height and strength allowed him to excel in the air, and his technical ability and agility saw him execute spectacular strikes, such as volleys and bicycle kicks, throughout his career. A fast and opportunistic striker with quick reactions, he often took advantage of loose balls in the penalty area. Possessing a powerful and accurate shot, he was capable of scoring goals with both feet from inside or outside the penalty area, as well as with his head; he was also an accurate penalty kick and free-kick taker.

He played his first game for Ajax in April 1982, scoring a debut goal in the 5–0 victory over NEC.

In the 1982–83 season, he competed with the European top scorer Wim Kieft for the position of centre forward, and scored nine goals in 20 league matches. After Kieft left for Serie A club Pisa the next season, Van Basten solidified his position as the team’s main attacker.

He became a top scorer in the league for four seasons from 1983–84 to 1986–87, scoring 118 goals in 112 matches. In the 1985–86 season, he scored 37 goals in 26 league matches, including six goals against Sparta Rotterdam and five against Heracles Almelo, and won the European Golden Boot. He also scored the winning goal in the UEFA Cup Winners’ Cup final against Lokomotive Leipzig in 1987. He had scored 128 goals in 133 league games for Ajax. On November 1986 he scored his most famous goal in an Ajax jersey, a spectacular overhead kick against FC Den Bosch.

Van Basten joined Italian powerhouse AC Milan in 1987 and helped the club win the Serie A title despite being limited to 11 league games by an ankle injury. But it was his performance for the Netherlands during the 1988 European Championship that left no doubt about his elite skills. The unstoppable striker netted a tournament-high five goals, including the game-winner against West Germany in the semifinal and a mind-boggling strike from an impossible angle to sink the Soviet Union in the final.

In 1988–89, Van Basten won the Ballon d’Or as Europe’s top footballer. He scored 19 goals in Serie A and scored two goals in the final of the European Cup as Milan triumphed against Steaua Bucureşti. In 1989–90, he became Capocannoniere, Serie A’s leading goal scorer, and Milan successfully defended the European Cup after beating Benfica in the final match.

Milan struggled in the 1990–91 season, as Sampdoria won the Scudetto. After Van Basten fell out with Arrigo Sacchi, Berlusconi sacked the manager. Fabio Capello took over the following season, and Milan went undefeated in the league to win another Scudetto. Van Basten scored 25 league goals, and became Capocannoniere again.

In November 1992, he became the first player to score four goals in a Champions League match, against IFK Göteborg, including a picture perfect bicycle kick. In December 1992, Van Basten was named FIFA World Player of the Year.

After winter must come spring and after a poor season came a supreme 1991/92 one for San Marco. His hunger for winning and scoring resulted in the second Capocannoniere title, this time with 25 golas in only 31 matches! AC Milan once again won the Italian Serie A and were again ready to conquer the world of football. Marco wanted to seal that great time of his career with the Dutch national team during the 1992 European Championship. In the end, Holland reached the semi-final in which they lost to Denmark after the shootout competition. Marco, one of the best penalty takers of the team, missed from the spot and Oranjes were forced to watch the final from the stand. The saddest thing is the fact that it was the last international tournament for the great footballer.

Van Basten’s talent was already noticed at a young age and he was called up for the 1983 FIFA World Youth Championship. He made his senior debut for the Netherlands national team that same year. At UEFA Euro 1988, Van Basten played a pivotal role in the victorious Dutch team.

He finished top scorer and was named player of the tournament. In 2002 the UK public voted Van Basten’s volley against the Soviet Union #21 in the list of the 100 Greatest Sporting Moments.

The Dutch national team exited the 1990 World Cup early, losing to West Germany in the second round. Van Basten never scored in the World Cup Finals.

And, almost suddenly, his career was over. Slowed by another ankle injury that season, van Basten rushed back to participate in the 1993 European Cup final, but was reinjured by a brutal foul. The gifted striker spent the next two years undergoing multiple operations and rehabilitation before finally announcing his retirement in August 1995, at age 30.

Van Basten entered the coaching ranks in 2003 as an assistant with Ajax’s reserve squad, but was thrust into the role of national team coach the following summer. His tenure started well, as the Oranje went undefeated while qualifying for the 2006 World Cup, but the team suffered disappointing second-round elimination in the big tournament.

In November 2006, Van Basten recalled exiled Milan midfielder Clarence Seedorf for a friendly against England at the Amsterdam Arena. In May 2007, Van Basten announced the end of his long-running dispute with Ruud van Nistelrooy, who had previously declared never to play for a Dutch national squad with Van Basten as its manager. Other players, such as Roy Makaay, Mark van Bommel, Boudewijn Zenden and Edgar Davids, however, remained out of favour.

Van Basten had a contract with the KNVB for managing the Dutch national side until 2008. The KNVB had expressed its wishes to extend his contract to include the World Cup qualification route to 2010 World Cup in South Africa. On 22 February 2008, Van Basten signed a four-year contract with Ajax, starting from 1 July. His last tournament thus was the UEFA Euro 2008, where the Netherlands surprised with a strong first round performance.

The Ajax legend was named manager of his old club in 2008, and he ended his run as national coach after the Dutch lost to Russia in the quarterfinals of that summer’s European Championship. Despite his four-year deal with Ajax, he resigned in May 2009 after the club failed to qualify for the European Cup.

On 13 February 2012, it was announced that Van Basten would become the manager of Eredivisie club Heerenveen in the 2012–13 season. Van Basten led Heerenveen to an eighth-place finish in the 2012–13 year campaign. He then lead them to a fifth-place finish the following season, the 2013–14 campaign. He finished his reign with a record of 27 wins, 18 draws and 27 losses in 72 matches.

On 16 September 2014, parties agreed Van Basten would relinquish his role as manager in order to sign a new contract as assistant coach until 2016; this was motivated by Van Basten himself, who stated the stress caused by his full-time role as head coach was causing him physical and mental issues. He finished his reign with two wins and three losses in five matches.

Marcel “Marco” van Basten was born on October 31, 1964, in Utrecht, Netherlands. The son of a former semi-professional soccer player, he joined local youth team EDO at the age of 6. Van Basten spent nearly a decade with another youth club, UVV Utrecht, then briefly played for USV Elinkwijk before signing with Dutch giants AFC Ajax in 1981.

Van Basten features in EA Sports’ FIFA video game series, and was named in the Ultimate Team Legends in FIFA 14.