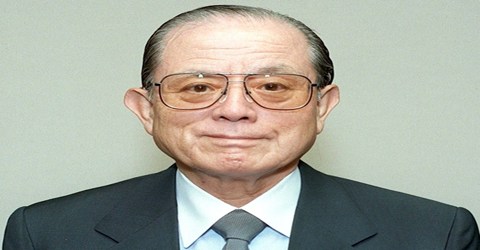 Masaya Nakamura (Namco) was born on 24 December 1925, in Japan. He was a Japanese businessman and founder of Namco, initially an amusement ride manufacturing company, but which grew under Nakamura’s leadership into the third largest video game developing entity in Japan in the 1970s and 1980s. Nakamura helped to usher in Namco’s growing video game division for arcade games, leading to numerous successes including Toru Iwatani’s Pac-Man (1980), which remains the highest-grossing arcade game worldwide; for his leadership in directing the company to this success, Nakamura is considered “the father of Pac-Man”.

Nakamura stepped down as Namco’s CEO in 2002 and took a ceremonial role in the company’s management, three years before Namco merged with Bandai, forming Bandai Namco. Nakamura was awarded the “Order of the Rising Sun, Gold Rays with Rosette” by the Japanese government in 2007 for his contributions to Japanese industry.

Masaya Nakamura was born on 24 December 1925, and he graduated from Yokohama Institute of Technology in 1948 while studying ship-building. In 1955, in the wake of Japan’s economic recovery from World War II, he then founded Nakamura Manufacturing, a company which created kiddie rides for department stores. In one such business deal, Nakamura secured a deal with the department store chain Mitsukoshi in the early 1960s to install a ride on the building’s rooftop. The ride was very popular and Mitsukoshi commissioned Nakamura’s company to install similar rides across all their stores. The company was later renamed Nakamura Amusement Machine Manufacturing Company (or the initialism “NAMMCo!”, from which Namco was derived) in 1977. The company soon expanded from mechanical amusement rides to arcade games in the 1970s. Some of the company’s first arcade games used electromechanical projection technology such as F-1 (1976). Nakamura saw potential in the rising video game sector and hired a number of software engineers to allow the company develop its own, as well as testing the games himself for their amusement value. He also purchased Atari, Inc.’s failing Japan division from Nolan Bushnell for $500,000, beating rival Sega’s offer of $80,000; the purchase allowed Nakamura’s company to distribute Atari’s games for a decade, and inspired the company to their own designs. Popular games, such as Galaxian (1979) and Pac-Man (1980), were introduced during the late 70s and through the 80s. Pac-Man was developed by one of Nakamura’s new hires, Toru Iwatani, with Nakamura having suggested the “Pac” name as a shortened form of pakku, the sound the character made while it ate dots and ghosts on the screen. Pac-Man became the company’s runaway hit, leading to several sequels including Ms. Pac-Man (1981). As of 2016, Pac-Man is the highest-grossing arcade game of all time, earning $3.5 billion by 1990 or $7.68 billion adjusted for 2016 inflation. He also led Namco to manage a chain of now-defunct theme parks across Japan. After Namco bought the film studio Nikkatsu in 1993, Nakamura became involved in film production and was credited as executive producer on a number of Nikkatsu movies. In 2002, Nakamura stepped down as CEO, taking on a more ceremonial role in the company’s management. Namco later merged with rival Bandai to form Bandai Namco in 2005, with Nakamura retaining an honorary position in its entertainment arm, Bandai Namco Entertainment. At this point, Nakamura was Japan’s 68th richest person. Nakamura Amusement Machine Manufacturing Company started their business on June 1, 1955; 61 years ago. March 31, 2006, it re-started as just two mechanical horse rides on a department store rooftop but went on to pioneer game arcades and amusement parks.

Pac-Man was developed by one of Nakamura’s new hires, Toru Iwatani, with Nakamura having suggested the “Pac” name as a shortened form of pakku, the sound the character made while it ate dots and ghosts on the screen. Pac-Man became the company’s runaway hit, leading to several sequels including Ms. Pac-Man (1981).

Pac-Man, designed by Namco engineer and video game maker Toru Iwatani, went on sale in 1980, at a time when there were few rival games, such as Space Invaders. The plucky yellow circle with the huge mouth was a huge hit.

It’s estimated to have been played more than 10 billion times: Guinness World Record has named it the world’s most successful coin-operated arcade game.

The game was non-violent but just challenging enough to hook players into steering the Pac-Man for hours through its mazes on the hunt for ghostly tidbits.

The iconic Pac-Man adorns T-shirts and other merchandise and inspired animation shows, a breakfast cereal and even the nickname for Filipino boxer Manny Pacquiao.

The idea for Pac-Man’s design came from the image of a pizza with a slice carved out. Nakamura reportedly chose the word “Pac,” or “pakku” in Japanese, to represent the sound of the Pac-Man munching its prey.

The game started out as an arcade item and then was at first played on the Nintendo Family Computer home console. It since has been adapted for cellphones, PlayStation and Xbox formats.

Other hits from Namco include driving simulation games like “Ridge Racer” and a drumming game.

Nakamura was a key player in Bandai Namco’s global growth. His pet saying was that his company delivered varied and total entertainment. He took pride in having fun and games for his job. As of 2016, Pac-Man is the highest-grossing arcade game of all time, earning $3.5 billion by 1990 or $7.68 billion adjusted for 2016 inflation. Nakamura said in a 1983 interview that though he did expect it to be successful, “I never thought it would be this big”. Nakamura is considered to be one of the first to identify the potential of “screen addiction” due to how much younger people would play Pac-Man and his company’s other games. Namco also invested in the handheld and console gaming market, which took off in the late 80s, with the success of Ridge Racer (1993) and Tekken (1994). Because of his vision in developing arcade games, Nakamuara is often considered “the father of Pac-Man”, and credited as one of the instrumental people behind Japan’s video game industry.

Masaya Nakamura (Namco) died at the age of 91; on 22 January 2017. The announcement of his death was made by Bandai Namco on 30 January, requesting respect for his family’s privacy. His funeral and wake were held privately, but the company plans to offer a separate public memorial service for Nakamura. The Japanese government awarded Nakamura the “Order of the Rising Sun, Gold Rays with Rosette” in their 2007 Spring Conferment of Decorations for his contribution to Japanese industry.

Masaya Nakamura was inducted into the International Video Game Hall of Fame in Ottumwa, Iowa at The Big Bang Gaming Extravaganza, which took place from 5–8 August 2010. Nakamura acknowledged his induction via a video feed. Pac-Man was also inducted and honored at a party celebrating his 30th birthday. Pac-Man was present in Ottumwa for the festivities.