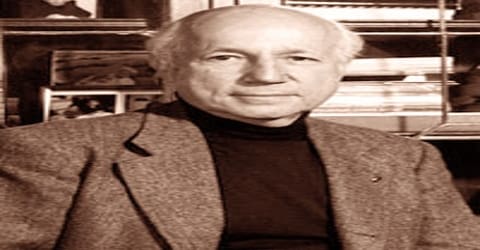 An American biochemist who received the 1961 Nobel Prize for Chemistry for his discovery of the chemical pathways of photosynthesis, Melvin Calvin was born on April 8, 1911, in St. Paul, Minnesota, the U.S. to the son of Elias Calvin and Rose Herwitz, immigrants from the Russian Empire. He spent most of his five-decade career at the University of California, Berkeley.

Melvin Calvin’s renowned discovery of the ‘Calvin cycle’ that encompass three phases of light-independent reactions of photosynthesis carbon fixation, reduction reactions, and ribulose 1,5-bisphosphate (RuBP) regeneration. This discovery was made by Calvin along with American biologist Andrew Benson and American scientist James Bassham. In his career span of around five decades, most of which was spent at the ‘University of California’, Berkeley, he made several studies that yielded significant discoveries covering a broad area of biological and physical chemistry. The series of investigations made by Calvin included work on hydrogen activation; radiation chemistry; electronic structure of organic molecules; artificial photosynthesis; photoelectronic, electronic and photochemical behavior of porphyrins; and chemical evolution of life among others. He worked on isolating and purifying plutonium from other irradiated nuclear fission products of uranium by applying chelation and solvent extraction while working in the ‘Manhattan Project’. He and his wife Genevieve Jemtegaard collaborated to study chemical factors present in the Rh blood group system and helped to ascertain the structure of one of the Rh antigens that they named ‘elinin’.

Melvin Calvin received several awards and recognition including ‘Davy Medal’ from the ‘Royal Society of London’ (1964), ‘Priestley Medal’ (1978) and the U.S. ‘National Medal of Science’ (1989). Melvin Calvin, in full Melvin Ellis Calvin, was born on April 8, 1911, in St. Paul, Minnesota, to Jewish immigrants Elias Calvin and Rose Herwitz, who originally hailed from the Russian Empire. His father was from Kalvaria, Lithuania, so the Ellis Island immigration authorities renamed him Calvin; his mother was from Russian Georgia. His family relocated to Detroit, Michigan when he was very small.

As a child, Calvin collected rocks, watched birds, and mused about the nature and composition of the many products he saw in his parents’ grocery store. It led inevitably to a lifelong dedication to chemistry. In 1928 he completed his graduation from ‘Central High School’, Detroit.

Melvin Calvin earned his Bachelor of Science from the Michigan College of Mining and Technology (now known as Michigan Technological University) in 1931 and his Ph.D. in chemistry from the University of Minnesota in 1935. He then spent the next four years doing postdoctoral work at the University of Manchester, submitting his thesis on electron affinity of halogen atoms. After receiving a full scholarship from ‘Michigan College of Mining and Technology’ (at present ‘Michigan Technological University’) in Houghton, he joined the college and studied geology, mineralogy, civil engineering, and paleontology. All these subjects proved to be extremely beneficial for his future scientific endeavors.

Thereafter Calvin received a ‘Rockefeller Foundation’ grant following which he pursued his postdoctoral work at the ‘University of Manchester’. There he came under the guidance of Professor Michael Polanyi under whom he researched on metalloporphyrins, activation of molecular hydrogen and coordination catalysis.

Melvin Calvin married Marie Genevieve Jemtegaard in 1942, and the couple was blessed with two daughters, Karole and Elin and a son, Noel. Leaving Minnesota with his doctorate, Melvin Calvin used his own savings to supplement a postdoctoral fellowship from the National Research Council to work for two years with Michael Polány, as Rockefeller Fellow during the 1935-1937 periods, at the University of Manchester. His research topic was the interactions between quantum mechanical theory and chemical experimentation, starting with platinum-hydrogen activation systems.

In 1937 Calvin was inducted as an instructor at the ‘University of California’, Berkeley. His career path in the university saw a gradual rise first advancing as a Full Professor in 1947 and then as a Professor of Molecular Biology in 1963, a post he retained till his retirement in 1980. He carried on with his research on activation of molecular hydrogen at Berkeley that he started at Manchester and started studying color of organic compounds that led him to investigate the electronic structures of organic molecules. While investigating molecular genetics during the early 1940s, he suggested an involvement of hydrogen bonding in the piling of nucleic acid bases in the thread like structures called chromosomes, present in the nucleus of living organisms.

At Berkeley, Calvin continued his work on hydrogen activation and began work on the color of organic compounds, leading him to study the electronic structure of organic molecules. In the early 1940s, he worked on molecular genetics, proposing that hydrogen bonding is involved in the stacking of nucleic acid bases in chromosomes. During World War II, he worked on cobalt complexes that bond reversibly with oxygen to produce an oxygen-generating apparatus for submarines or destroyers. In the Manhattan Project, he employed chelation and solvent extraction to isolate and purify plutonium from other fission products of uranium that had been irradiated. Although not developed in time for wartime use, his technique was later used for laboratory separations.

Calvin’s big chance came in the autumn of 1945; to understand its significance it is necessary to go back to the history of photosynthesis and the level of understanding before World War II. It had been known for two centuries that Sunlight allows green plants to fix atmospheric carbon dioxide into all the organic compounds needed for the plants to grow and reproduce. What was not known was how it was done. There were theories including a suggestion that the fixation of carbon dioxide first formed formaldehyde, which was then supposed to polymerize into sugars. But the basis for that idea was simply that the empirical formula for formaldehyde (CH2O) multiplied six times gave the equally empirical formula for a hexose sugar (C6H12O6); there was no experimental evidence and, indeed, plants fail to produce sugar when supplied with formaldehyde and are actually poisoned by it.

In 1946 Calvin became the founder-director of an inter-disciplinary bio-organic chemistry group, which at that time was housed in ‘Lawrence Radiation Laboratory’. Thus the old dilapidated wooden structure devoid of any internal walls became his first open laboratory. He also served as the Associate Director of the ‘Lawrence Radiation Laboratory’ till his retirement in 1980 and carried out many of his significant research works there. His Nobel Prize-winning research that he initiated in 1946 encompassed elucidating the way plants make use of sunlight and chlorophyll to metamorphose water and carbon dioxide into the biological molecule, carbohydrate. Calvin along with his collaborators James Bassham and Andrew Benson applied the radioactive isotope carbon-14 to trace out the entire track traveled by the chemical element carbon through a plant at the time of photosynthesis. The tracer technique was elucidated by them in ‘Isotopic Carbon’ (1949).

By 1948, word of this new and powerful technique had reached the Botany Department in Berkeley, from whence it was brought to Calvin’s laboratory by a graduate student, William H. Stepka. They displayed that it is the action of sunlight on the chlorophyll of a plant not on carbon dioxide, as was earlier perceived, that triggers the development of organic compounds.

While investigating, he suspended green algae, chlorella, into the water after which it was exposed to light followed by addition of carbon dioxide containing carbon-14 to it. A new research device, paper chromatography was applied to trace the existence of carbon-14 while the algae underwent its life process generating carbohydrates from water, carbon dioxide, and minerals. Thus it became possible to ascertain the compounds that contain radioactive carbon at different steps of photosynthesis. Such findings were detailed in the books ‘The Path of Carbon in Photosynthesis’ (1957) and ‘The Photosynthesis of Carbon Compounds’ (1962).

Calvin’s bioorganic group eventually required more space, so he designed the new Laboratory of Chemical Biodynamics (the “Roundhouse” or “Calvin Carousel”). This circular building contained open laboratories and numerous windows but few walls to encourage the interdisciplinary interaction that he had carried out with his photosynthesis group at the old Radiation Laboratory. He directed this laboratory until his mandatory age retirement in 1980 when it was renamed the Melvin Calvin Laboratory. Although officially retired, he continued to come to his office until 1996 to work with a small research group.

During the 1950s Calvin was among the first members of the Society for General Systems Research. In 1963 he was given the additional title of Professor of Molecular Biology. He was a founder and Director of the Laboratory of Chemical Biodynamics and simultaneously Associate Director of Berkeley Radiation Laboratory, where he conducted much of his research until his retirement in 1980.

In 1964 the ‘Dow Chemical Company’ inducted him as a member of its Board of Directors. Calvin was part of many scientific boards of the US government including the ‘Science Advisory Committee’ of the President that he served twice for President John F. Kennedy and President Lyndon B. Johnson.

Calvin was a superb lecturer, particularly in his earlier days when he felt able to get away with total informality. Hitching himself onto the front of the lecturer’s bench or table, he would speak without notes, both he and his listeners carried away by enthusiasm for the topic. He seemed to have no concept of time and would suddenly pull himself up short, realizing he had overrun and would hastily try to bring his presentation to an orderly end. When awarded the Nobel Prize, he was shocked to learn that protocol demanded him to give his acceptance lecture in exactly forty minutes. So, perhaps for the first time in his life, he wrote out his lecture and got his colleagues to edit and time it for him. His wife, following his text, sat next to the projectionist in order to indicate when the next slide was to be shown, thus saving Calvin the trouble of saying so and giving him a few extra precious seconds. In his final years of active research, Calvin studied the use of oil-producing plants as renewable sources of energy. He also spent many years testing the chemical evolution of life and wrote a book on the subject that was published in 1969.

In 1971 Melvin Calvin was made the President of the ‘American Chemical Society’. He was a member of the ‘Royal Society of London’ and the ‘National Academy of Sciences’. Calvin was conferred honorary D.Sc. degrees from ‘Oxford University’, ‘University of Nottingham’, ‘Northwestern University’ and ‘Michigan College of Mining and Technology’. On May 1992, the ‘American Chemical Society’ published his autobiography titled ‘Following the Trail of Light: A Scientific Odyssey’. Calvin was the author of more than 600 articles and 7 books, and he was the recipient of several honorary degrees from the U.S. and foreign universities.

In 1961 Melvin Calvin received the ‘Nobel Prize’ in Chemistry.

Melvin Calvin had suffered a severe heart attack in 1949 from which he recovered completely, but after his wife died in 1987, he became rather depressed and gradually grew frailer. On January 8, 1997, Melvin Calvin passed away in Berkeley, California, the USA at the age of 86.

In his 2011 television history of Botany for the BBC, Timothy Walker, Director of the University of Oxford Botanic Garden, criticised Calvin’s treatment of Andrew Benson, claiming that Calvin had got the credit for Benson’s work after firing him, and had failed to mention Benson’s role when writing his autobiography decades later. Benson himself has also mentioned being fired by Calvin and has complained about not being mentioned in his autobiography.

Melvin Calvin was featured on the 2011 volume of the American Scientists collection of US postage stamps, along with Asa Gray, Maria Goeppert-Mayer, and Severo Ochoa. This was the third volume in the series, the first two having been released in 2005 and 2008.