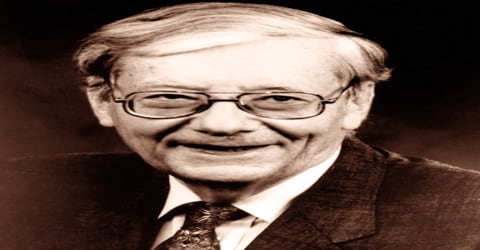 A Dutch-born American physicist, corecipient with Arthur Leonard Schawlow of the United States and Kai Manne Börje Siegbahn of Sweden of the 1981 Nobel Prize for Physics for their revolutionary spectroscopic studies of the interaction of electromagnetic radiation with matter, Nicolaas Bloembergen was born in Dordrecht, Netherlands, on March 11, 1920, where his father was a chemical engineer and executive. Bloembergen made pioneering use of lasers in these investigations. During his career, he was a professor at both Harvard University and later at the University of Arizona.

Bloembergen made pioneering use of lasers in his experiments and performed significant research on nuclear quadrupole interactions in alloys and imperfect ionic crystals. Born in the Netherlands into a large family, he became interested in science at a young age owing to the intellectually stimulating atmosphere he grew up in. His grandfather was a high school principal with a Ph.D. in mathematical physics, and the young boy inherited his aptitude for the subject. As a young man, he entered the University of Utrecht to study physics but the institution was shut down during World War II. He then went to the United States for his higher studies and eventually settled down there. His initial research was on nuclear magnetic resonance which led him to an interest in masers. He proceeded to build a three-stage crystal maser and also did important work in the development of laser spectroscopy, which allows high-precision observations of atomic structure. It was ultimately his research in nonlinear optics that helped him win the Nobel Prize. Nicolaas Bloembergen, also known as Nicolaas “Nico” Bloembergen, was born on March 11, 1920, in Dordrecht, Netherlands, to Auke Bloembergen and Sophia Maria Quint as one of their six children. His father Auke Bloembergen, a chemical engineer by profession, was an executive in a chemical fertilizer company. His mother Sophia Maria Quint though highly educated chose to be a homemaker focusing all her attention on raising the family. Bloembergen had five siblings. As a twelve-year-old kid, he joined the municipal gymnasium in Utrecht. He became drawn towards science, particularly physics, during his teenage days.

In 1938, Nicolaas Bloembergen enrolled himself at the University of Utrecht to study Physics. His University days were marred by the political turmoil engulfing the European Countries due to the chaos created by the rampaging effects of World War II. Germany invaded the Netherlands in 1940. In 1941, his guide, motivator and beloved teacher Professor L.S. Ornstein was ousted from the University.  Bloembergen somehow managed to carry on with his studies and secured his Masters from the University before the Germans finally closed down the University entirely in 1943.

The following two years were nightmarish for the young man who spent his days hiding indoors to escape the Nazis, surviving on whatever he could get his hands on to eat. Despite the difficulties, he continued reading books by the light of a storm lamp. By the time World War II ended, Europe had been completely devastated. So Bloembergen left the war-torn Netherlands in 1945 and went to the United States to pursue graduate studies at Harvard University under Professor Edward Mills Purcell. Shortly before his arrival at Harvard, Purcell and his graduate students Torrey and Pound discovered nuclear magnetic resonance. Upon his joining, Bloembergen helped the team in developing an early NMR system. Bloembergen also performed research on the nuclear spin relaxation mechanism by conduction electrons in metals and by paramagnetic impurities in ionic crystals. He returned to the Netherlands to receive his Ph.D. from the University of Leiden with his thesis ‘Nuclear Magnetic Relaxation’ in 1948 before returning to Harvard.

Nicolaas Bloembergen met Huberta Deliana Brink (Deli) in 1948 while on vacation with his school’s Physics Club. She was able to travel with Bloembergen to the United States in 1949 on a student hospitality exchange program; he proposed to her when they arrived in the States and were married by 1950 on return to Amsterdam. They were blessed with three children.

In 1958, Nicolaas Bloembergen became a naturalized citizen of the United States of America.

In 1946 Nicolaas Bloembergen entered Harvard University, where with Edward Purcell and Robert Pound he did fundamental research on nuclear magnetic resonance. At Harvard, he did get the opportunity of listening to the lectures delivered by stalwart academicians like Van Vleck, Schwinger, and Kemble. In 1947, Bloembergen returned to the Netherlands and submitted his thesis ‘Nuclear Magnetic Relaxation’ at the University of Leiden. In 1948, he received his Ph. D from the University and was also appointed as a postdoc there for about a year. Bloembergen came back to Harvard in 1949. The Society of Fellows offered him a fellowship (Junior Fellow) at the Harvard followed by the post of Associate Professor in 1951. He then became Gordon McKay Professor of Applied Physics in 1957; Rumford Professor of Physics in 1974; and Gerhard Gade University Professor in 1980. In 1990 he retired from Harvard.

In 1957, he became Gordon McKay Professor of Applied Physics, a title he held until 1980. His initial research was on nuclear magnetic resonance. During the early years of his career, he studied nuclear quadrupole interactions in alloys and imperfect ionic crystals and developed an understanding of the scalar and tensor indirect nuclear spin-spin coupling in metals and insulators. His research played a vital role in his team’s experiments in microwave spectroscopy, which led the group to develop a crystal maser in 1956. He designed a three-stage crystal maser that eventually became the most widely used microwave amplifier.

In addition, Bloembergen served as a visiting professor. From 1964 to 1965, Bloembergen was a visiting professor at the University of California, Berkeley. In 1996-1997, he was a Visiting Scientist at the College of Optical Sciences of the University of Arizona; he became a Professor at Arizona in 2001. Bloembergen was a member of the Board of Sponsors of the Bulletin of the Atomic Scientists and Honorary Editor of the Journal of Nonlinear Optical Physics & Materials.

In 1956, Bloembergen and his research team were successful in developing the crystal maser. In later years, the three-stage crystal maser invented by him became the most widely used microwave amplifier.

Bloembergen also performed major work in the field of laser spectroscopy, which allows high-precision observations of atomic structure. His research in this area ultimately led him to formulate nonlinear optics, a new theoretical approach to the analysis of how electromagnetic radiation interacts with matter. He served as the Rumford Professor of Physics from 1974 to 1980 and was appointed Gerhard Gade University Professor in 1980. He retired from Harvard in 1990.

Bloembergen’s early research on nuclear magnetic resonance led him to an interest in masers. He designed a three-stage crystal maser that was dramatically more powerful than earlier gaseous masers and that has become the most widely used microwave amplifier. Bloembergen then developed laser spectroscopy, which allows high-precision observations of atomic structure. His laser spectroscopic investigations led him in turn to formulate nonlinear optics, a new theoretical approach to the analysis of how electromagnetic radiation interacts with matter. Bloembergen’s research in nonlinear optics helped procure him a share of the Nobel Prize.

Bloembergen developed laser spectroscopy, a technique that allowed high-precision observations of atomic structures. He also cemented his reputation as an expert in laser spectroscopy by formulating nonlinear optics. It was a theoretical analysis of how electromagnetic radiations and matter interacted with each other. In reflection to his work in a Dutch newspaper in 1990, Bloembergen said: “We took a standard textbook on optics and for each section, we asked ourselves what would happen if the intensity was to become very high. We were almost certain that we were bound to encounter an entirely new type of physics within that domain”.

In 2001, Bloembergen began teaching at the University of Arizona where he continued his research in nonlinear optics with special emphasis on interactions of picosecond and femtosecond laser pulses with condensed matter and of collision-induced optical coherences.

Bloembergen was awarded the Lorentz Medal in 1978. He received the Bijvoet Medal of the Bijvoet Center for Biomolecular Research of Utrecht University in 2001.

Nicolaas Bloembergen died on September 5, 2017, at an assisted living facility in his hometown Tucson, Arizona of cardiorespiratory failure, at the age of 97.

A world-renowned expert on laser spectroscopy, Nicolaas Bloembergen is credited with developing a technique which allows high-precision observations of atomic structure. He also designed a three-stage crystal maser that went on to become the most widely used microwave amplifier.