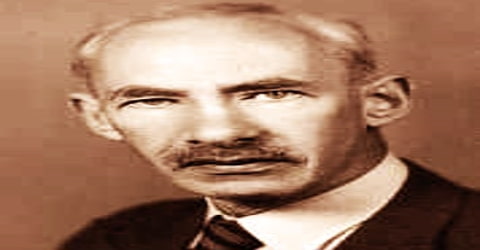 Born in London, Bernays grew up in Paris and Berlin. As a child, he showed a keen interest in music as well as ancient languages and mathematics. In college, he majored in mathematics and also studied philosophy and theoretical physics as additional subjects. At the age of 24, he received his doctoral degree in mathematics from the University of Berlin. He also obtained his Habilitation from the University of Zurich and became a Privatdozent there. Soon, he joined David Hilbert as his research assistant in investigating the foundations of arithmetic. Eventually, he was awarded the Venia Legendi at the University of G¨ottingen but lost the post during Second World War due to his Jewish ancestry. He finally moved to Switzerland where he taught at the Eidgen¨ossische Technische Hochschule, Z¨urich. He is best remembered for his joint two-volume work ‘Grundlagen der Mathematik’ (1934-39) with Hilbert, and his Axiomatic Set Theory which was published in 1958.

Paul Bernays, in full Paul Isaak Bernays, was born on October 17, 1888, in London. He was the son of Julius Bernays, a Swiss businessman, and Sarah Brecher. He had a happy childhood growing up with a younger brother and three younger sisters.

Bernays spent his childhood in Berlin and attended the Köllner Gymnasium, 1895-1907. At the University of Berlin, he studied mathematics under Issai Schur, Edmund Landau, Ferdinand Georg Frobenius, and Friedrich Schottky; philosophy under Alois Riehl, Carl Stumpf and Ernst Cassirer; and physics under Max Planck. At the University of Göttingen, Bernays studied mathematics under David Hilbert, Edmund Landau, Hermann Weyl, and Felix Klein; physics under Voigt and Max Born; and philosophy under Leonard Nelson.

Paul Bernays was of the Jewish faith and a citizen of Switzerland. He remained unmarried throughout his life and lived in Zürich with his mother and two unmarried sisters. By nature, he was friendly and benevolent, helping several authors with their papers. Bernays never passed judgment on others and always tried to see everything with positivity. After obtaining his doctorate from the University of Göttingen in Germany under Edmund Landau in 1912, Paul Bernays taught for five years at the University of Zürich before returning to Göttingen. There he collaborated closely with the prominent mathematician David Hilbert, who in the twilight of his career sought to overcome the challenges to classical mathematics posed by L.E.J. Brouwer’s intuitionism.

In 1917, Bernays was invited by Hilbert to assist him in his research of the foundations of arithmetic. The job took him back to Gottingen and he helped Hilbert in preparing lectures and notes. Bernays also lectured on other areas of mathematics at the University of Göttingen. In 1918, that university awarded him a second Habilitation, for a thesis on the axiomatics of the propositional calculus of Principia Mathematica.

Bernays’s own philosophical views remained in the background during the “foundations crisis” of the 1920s. Nevertheless, he served as a strong pillar of support for Hilbert’s program to formalize mathematics. Taking Hilbert’s name as coauthor, he wrote the classic study Grundlagen der Mathematik, 2 vol. (1934-39; reissued 1968-70; “Foundations of Mathematics”). In 1956 Bernays also revised Hilbert’s Grundlagen der Geometrie (1899; The Foundations of Geometry), which went through several editions.

In 1922, Göttingen appointed Bernays extraordinary professor without tenure. His most successful student there was Gerhard Gentzen. After the passing of the Law for the Restoration of the Professional Civil Service in 1933, he was dismissed from this post because of his Jewish ancestry. After working privately for Hilbert for six months, Bernays and his family moved to Switzerland, whose nationality he had inherited from his father, and where the ETH employed him on occasion. Bernays also visited the University of Pennsylvania and was a visiting scholar at the Institute for Advanced Study in 1935-36 and again in 1959-60.

In Zürich Paul Bernays delved into the realm of set theory, trying to streamline the Zermelo-Fraenkel system of axioms. This work appeared in a series of articles under the title “A System of Axiomatic Set Theory” (1937-54), from which the principal theses were published as Axiomatic Set Theory (1958). In it Bernays simplified and refined the work of John von Neumann on logic and set theory; these modifications were further developed by the logician Kurt Gödel.

In 1939, Bernays received the Venia Legendi at the ETH and in 1945, he became an extraordinary professor. He gave lectures on algebraic number fields, set theory, elliptic functions, geometrical constructions, the concept of number, elements of analysis, mathematical logic, the introduction of proof theory, lattice theory, the constitution of the continuum, etc. He also continued to attend lectures and seminars given by intellectual colleagues and friends like Michel Plancheret, Beno Eckmann, Eduard Stiefel, and Heinz Hopf.

Paul Bernays’s collaboration with Hilbert culminated in the two-volume work Grundlagen der Mathematik by Hilbert and Bernays (1934, 1939), discussed in Sieg and Ravaglia (2005). In seven papers, published between 1937 and 1954 in the Journal of Symbolic Logic, republished in (Müller 1976), Bernays set out an axiomatic set theory whose starting point was a related theory John von Neumann had set out in the 1920s. Von Neumann’s theory took the notions of function and argument as primitive; Bernays recast von Neumann’s theory so that classes and sets were primitive. Bernays’s theory, with some modifications by Kurt Gödel, is now known as von Neumann-Bernays-Gödel set theory. A proof from the Grundlagen der Mathematik that a sufficiently strong consistent theory cannot contain its own reference functor is now known as the Hilbert-Bernays paradox.

Bernays became acquainted with Ferdinand Gonseth and realized a similarity in viewpoint with him. Hence, he participated in several of Gonseth’s conferences and joined the editorial board of ‘Dialectica’. He later became a member of the International Society for the Philosophy of Science, founded by Pere S. Dockx. He became its President for two years. From 1956 to 1965, Bernays was invited thrice as visiting professor to the University of Pennsylvania, Philadelphia. Even in his 80s, he remained active in research.

Paul Isaac Bernays died of a heart condition on 18 September 1977, at the age of 88, in Zurich, Switzerland.

Paul Bernays’ partnership with Hilbert resulted in a two-volume work, ‘Grundlagen der Mathematik’ (1934-1939). The work attempted to build mathematics from symbolic logic and proof from it is now known as the Hilbert-Bernays paradox. Bernays research in proof theory and axiomatic set theory helped to produce a new discipline of mathematical logic. His axiomatic set theory was further developed by Kurt Gödel and is presently known as the Von Neumann-Bernays-Gödel set theory.