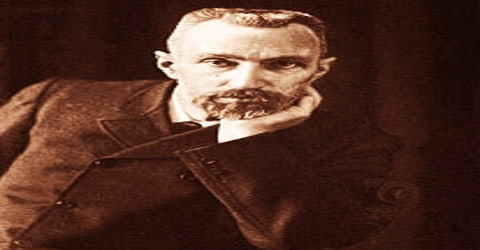 A French physical chemist, co-winner with his wife Marie Curie of the Nobel Prize for Physics in 1903, Pierre Curie was born in Paris, France, on 15 May 1859, and he was the son of Eugene Curie, a doctor of French Huguenot Protestant origin from Alsatia, and Sophie-Claire Depouilly Curie. Pierre and Marie discovered radium and polonium in their investigation of radioactivity. An exceptional physicist, he was one of the main founders of modern physics.

Pierre Curie’s early career was dedicated to his doctoral research on magnetism. He is credited with designing and perfecting an extremely sensitive torsion balance for measuring magnetic coefficients. He also proposed Curie’s Law and the Curie Dissymmetry Principle. The son of a doctor, Pierre was a brilliant student. He showed a strong aptitude for mathematics and geometry, obtaining his Mathematics degree at the age of 16 and completing the equivalent of a higher degree by 18. Working with his brother he discovered piezoelectricity, demonstrating that an electric potential could be generated by compressing crystals. They invented the Piezoelectric Quartz Electrometer in order to aid their work.

Pierre Curie married fellow physicist, Marie Sklodowska (popularly known as Marie Curie), and the two worked towards isolating polonium and radium. Together they pioneered in the study of radioactivity a term that the husband-wife duo coined. He also made breakthrough discoveries in the research of radioactive materials and was among the first scientists to discover nuclear energy. The life of this brilliant scientist was tragically cut short by a horse-drawn cart accident. Pierre Curie (French: kyʁi), was born on May 15, 1859, to Eugene Curie and his wife Sophie Claire Curie in Paris, France. His father was a doctor and educated his son himself when he was young.

When Pierre was 16, he earned his math degree. By the age of 18, he had completed the equivalent of a higher degree but did not proceed immediately to a doctorate due to lack of money. Instead, he worked as a laboratory instructor. When Pierre Curie was preparing for his Bachelor of Science degree, he worked in the laboratory of Jean-Gustave Bourbouze in the Faculty of Science.

Pierre could not continue his studies for want of funds and took up a job as a laboratory instructor where he worked until 1882. Then he was made in charge of all practical work in the Physics and Industrial Chemistry Schools. During his early career, Pierre used to work in collaboration with his brother, Jacques. Together they studied crystallography and discovered piezoelectric effects. Working in this field made him turn his attention to magnetism.

In 1895, Pierre obtained his Doctor of Science degree and was appointed Professor of Physics. He demonstrated what is known as Curie’s point the temperature at which the magnetic properties of a given substance changes. Pierre also constructed several pieces of equipment to assist in his experiments. These included balances, electrometers, and piezoelectric crystals. In 1900, he was promoted to Professor in the Faculty of Sciences, and in 1904 he became Titular Professor. Pierre Curie was introduced to Maria Skłodowska (also known as Marie Curie) by their friend, physicist Józef Wierusz-Kowalski. Pierre took her into his laboratory as his student and fell in love with her. Impressed with her love for science, Pierre proposed marriage to her. The couple got married in 26th July 1895 and was blessed with two daughters. His daughter Irene Joliot-Curie was also a prominent scientist and Nobel laureate herself. His other daughter, Eve, became a writer.

It would be a beautiful thing, a thing I dare not hope if we could spend our life near each other, hypnotized by our dreams: your patriotic dream, our humanitarian dream, and our scientific dream. (Pierre Curie to Maria Skłodowska)

The Curies had a happy, affectionate marriage, and they were known for their devotion to each other.

Both Pierre and Marie were dedicated scientists and collaborated as a team in isolating polonium and radium. They were pioneers in the study of radioactivity and were the first to use the term. Their work, including Marie’s celebrated doctoral work, made use of a sensitive piezoelectric electrometer constructed by Pierre and his brother Jacques. Appointed supervisor (1882) at the School of Physics and Industrial Chemistry at Paris, Pierre Curie resumed his own research and managed to perfect the analytical balance by creating an aperiodic balance with direct reading of the last weights. Then he began his celebrated studies on magnetism. He undertook to write a doctoral thesis with the aim of discovering if there exist any transitions between the three types of magnetism: ferromagnetism, paramagnetism, and diamagnetism. In order to measure the magnetic coefficients, he constructed a torsion balance that measured 0.01 mg, which is still used and called the Curie balance. He discovered that the magnetic coefficients of the attraction of paramagnetic bodies vary in inverse proportion to the absolute temperature Curie’s law. He then established an analogy between paramagnetic bodies and perfect gases and, as a result of this, between ferromagnetic bodies and condensed fluids.

Pierre Curie formulated what is now known as the Curie Dissymmetry Principle, which states in essence that: a physical effect cannot have a dissymmetry absent from its efficient cause. For example, a random mixture of sand in zero gravity has no dissymmetry (it is isotropic). Introduce a gravitational field, then there is a dissymmetry because of the direction of the field. Then the sand grains can ‘self-sort’ with the density increasing with depth. But this new arrangement, with the directional arrangement of sand grains, actually reflects the dissymmetry of the gravitational field that causes the separation.

Pierre Curie was appointed as the Professor of Physics in 1895. By now he was married to another physicist, Marie Skłodowska, who took the name Marie Curie after marriage. Together with his wife, he conducted experiments on what would become known as radioactive substances. The couple did not even have a well-equipped laboratory to work in and they faced financial problems too. But nothing could dampen their passion for science.

The phenomenon of radioactivity, discovered (1896) by Henri Becquerel, had attracted Marie Curie’s attention, and she and Pierre Curie determined to study a mineral, pitchblende, the specific activity of which is superior to that of pure uranium. While working with Marie to extract pure substances from ores, an undertaking that really required industrial resources but that they achieved in relatively primitive conditions, Pierre himself concentrated on the physical study (including luminous and chemical effects) of the new radiations. Through the action of magnetic fields on the rays given out by the radium, he proved the existence of particles electrically positive, negative, and neutral; this Ernest Rutherford was afterward to call alpha, beta, and gamma rays. Pierre then studied these radiations by calorimetry and also observed the physiological effects of radium, thus opening the way to radium therapy. (Pierre Curie and Marie Curie at work in their laboratory)

In 1898, the two found polonium after a thorough investigation and then radium some months later, eventually preparing 1 g/0.04 oz. of radium from uraninite. Furthermore, Pierre and Marie discovered that beta rays are negatively charged particles. The Curies labored considerably to achieve their scientific accomplishments. The two were hard pressed financially, and it is reported that in order to save money on transportation from home to work, they would ride their bicycles. Indeed, a teacher’s salary was minimal, yet Pierre and Marie still dedicated time and money to their research. Pierre Curie, along with one of his students, made the first discovery of nuclear energy, by identifying the continuous emission of heat from radium particles. He also investigated the radiation emissions of radioactive substances, and through the use of magnetic fields was able to show that some of the emissions were positively charged, some were negative and some were neutral. These correspond to alpha, beta, and gamma radiation.

Pierre Curie focused on studying the luminous and chemical effects of radiations by calorimetry. His studies paved the way for further research leading to radium therapy. He got a job offer from the University of Geneva which he declined in order to continue the work he had embarked on with his wife. He became the lecturer at the Sorbonne in 1900 and was promoted to a professorship in 1904. His brilliant career and inspiring life were tragically cut short by an accident in 1906. His complete works were published in 1908.

The curie is a unit of radioactivity (3.7 × 1010 decays per second or 37 gigabecquerels) originally named in honor of Curie by the Radiology Congress in 1910, after his death. Subsequently, there has been some controversy over whether the naming was in honor of Pierre, Marie, or both.

Pierre Curie shared the 1903 Nobel Prize for Physics along with Marie Curie and Antoine Henri Becquerel. While Becquerel won the prize “for his discovery of spontaneous radioactivity”, the Curie couple were recognized “for their joint researches on the radiation phenomena discovered by Professor Henri Becquerel”.

In 1903, Pierre Curie along with Marie was awarded the Davy medal by the Royal Society of London for their researches on radium. Pierre Curie died in a street accident in Paris on 19 April 1906. Crossing the busy Rue Dauphine in the rain at the Quai de Conti, he slipped and fell under a heavy horse-drawn cart. He died instantly when one of the wheels ran over his head, fracturing his skull. Statements made by his father and lab assistant imply that Curie’s characteristic absent-minded preoccupation with his thoughts contributed to his death.

As a physicist, Pierre Curie had made significant contributions to the fields of crystallography, magnetism, piezoelectricity, and radioactivity. He proposed the Curie’s law and along with a student, made the first discovery of nuclear energy. Much of the later works in nuclear chemistry and physics are based upon his initial research.

In April 1995, Pierre and Marie Curie were moved from their original resting place, a family cemetery, and enshrined in the crypt of the Panthéon in Paris. Marie Curie was the first woman to be honored in this way “for her own merits”.

The radioactivity of radium makes it a harmful substance, as scientists slowly came to realize in the early twentieth century after it was used as a luminescent paint on watch dials, panels, clocks, and other instruments (and deleterious side effects were noticed by lab workers and consumers alike). However, radium in the form of radium chloride has been beneficial in the field of medicine as a form of cancer treatment. Pierre and Marie Curie’s contribution to this fact cannot be ignored. Polonium has various practical applications in industrial and nuclear settings. However, it is also known as a very toxic substance and can be used as a poison. Perhaps most influential is its use as a neutron trigger for nuclear weapons.