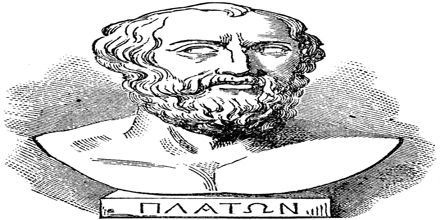 The Athenian philosopher Plato (c.428-347 B.C.) is one of the most important figures of the Ancient Greek world and the entire history of Western thought. In his written dialogues he conveyed and expanded on the ideas and techniques of his teacher Socrates. The Academy he founded was by some accounts the world’s first university and in it he trained his greatest student, the equally influential philosopher Aristotle.

Plato was the youngest son of Ariston and Perictione who both came from famous wealthy families who had lived in Athens for generations. While Plato was a young man his father died and his mother remarried, her second husband being Pyrilampes. It was mostly in Pyrilampes’ house that Plato was brought up. Aristotle writes that when Plato was a young man he studied under Cratylus who was a student of Heracleitus, famed for his cosmology which is based on fire being the basic material of the universe. It almost certain that Plato became friends with Socrates when he was young, for Plato’s mother’s brother Charmides was a close friend of Socrates.

Plato was born around 428 B.C., during the final years of the Golden Age of Pericles’ Athens. He was of noble Athenian lineage on both sides. His father Ariston died when he was a child. His mother Perictione remarried the politician Pyrilampes. Plato grew up during the Peloponnesian War (431-404) and came of age around the time of Athens’ final defeat by Sparta and the political chaos that followed. He was educated in philosophy, poetry and gymnastics by distinguished Athenian teachers including the philosopher Cratylus.

The young Plato became a devoted follower of Socrates—indeed, he was one of the youths Socrates was condemned for allegedly corrupting. Plato’s recollections of Socrates’ lived-out philosophy and style of relentless questioning became the basis for his early dialogues, which historians agree offer the most accurate available picture of the elder philosopher, who left no written works of his own.

TRAVELS, THE ACADEMY AND LATER LIFE

Following Socrates’ forced suicide, Plato spent 12 years traveling in southern Italy, Sicily and Egypt, studying with other philosophers including followers of the mystic mathematician Pythagoras. He began a lifelong relationship with the ruling family of Syracuse, who would later seek his advice on reforming their city’s politics.

Around 387, the 40-year-old Plato returned to Athens and founded his philosophical school in the grove of the Greek hero Academus, just outside the city walls. In his open-air Academy he delivered lectures to students gathered from throughout the Greek world (nine-tenths of them from outside Athens). Many of Plato’s writings, especially the so-called later dialogues, seem to have originated in his teaching there. In establishing the Academy Plato moved beyond the precepts of Socrates, who never founded a school and questioned the very idea of a teacher’s ability to impart knowledge.

Aristotle arrived from northern Greece to join the Academy at age 17, studying and teaching there for the last 20 years of Plato’s life. Plato died in Athens, and was probably buried on the Academy grounds.

The Academy flourished for nearly three centuries following Plato’s death, but was destroyed in the sacking of Athens by the Roman general Sulla in 86 B.C. Though continually read in the Byzantine Empire and in the Islamic world, Plato was overshadowed by Aristotle in the Christian west. It was only in the Renaissance that scholars like Petrarch led a revival of Plato’s thought, in particular his explorations of logic and geometry. William Wordsworth, Percy Shelly, and others in the 19th-century Romantic movement found philosophical solace in Plato’s dialogues.

Plato’s final years were spent at the Academy and with his writing. The circumstances surrounding his death are clouded, though it is fairly certain that he died in Athens around 348 B.C.E., when he was in his early 80s. Some scholars suggest that he died while attending a wedding, while others believe he died peacefully in his sleep.

Plato’s impact on philosophy and the nature of humans has had a lasting impact far beyond his homeland of Greece. His work covered a broad spectrum of interests and ideas: mathematics, science and nature, morals and political theory. His beliefs on the importance of mathematics in education have proven to be essential for understanding the entire universe. His work on the use of reason to develop a more fair and just society that is focused on the equality of individuals established the foundation for modern democracy.

Although Socrates influenced Plato directly as related in the dialogues, the influence of Pythagoras upon Plato also appears to have significant discussion in the philosophical literature. Pythagoras, or in a broader sense, the Pythagoreans, allegedly exercised an important influence on the work of Plato. According to R. M. Hare, this influence consists of three points: (1) The platonic Republic might be related to the idea of “a tightly organized community of like-minded thinkers”, like the one established by Pythagoras in Croton. (2) There is evidence that Plato possibly took from Pythagoras the idea that mathematics and, generally speaking, abstract thinking is a secure basis for philosophical thinking as well as “for substantial theses in science and morals”. (3) Plato and Pythagoras shared a “mystical approach to the soul and its place in the material world”. It is probable that both were influenced by Orphism.

Aristotle claimed that the philosophy of Plato closely followed the teachings of the Pythagoreans, and Cicero repeats this claim: “They say Plato learned all things Pythagorean” (Platonem ferunt didicisse Pythagorea omnia).

The precise relationship between Plato and Socrates remains an area of contention among scholars. Plato makes it clear in his Apology of Socrates, that he was a devoted young follower of Socrates. In that dialogue, Socrates is presented as mentioning Plato by name as one of those youths close enough to him to have been corrupted, if he were in fact guilty of corrupting the youth, and questioning why their fathers and brothers did not step forward to testify against him if he was indeed guilty of such a crime. Later, Plato is mentioned along with Crito, Critobolus, and Apollodorus as offering to pay a fine of 30 minas on Socrates’ behalf, in lieu of the death penalty proposed by Meletus. In the Phaedo, the title character lists those who were in attendance at the prison on Socrates’ last day, explaining Plato’s absence by saying, “Plato was ill.”

Plato never speaks in his own voice in his dialogues. In the Second Letter, it says, “no writing of Plato exists or ever will exist, but those now said to be his are those of a Socrates become beautiful and new”; if the Letter is Plato’s, the final qualification seems to call into question the dialogues’ historical fidelity. In any case, Xenophon and Aristophanes seem to present a somewhat different portrait of Socrates from the one Plato paints. Some have called attention to the problem of taking Plato’s Socrates to be his mouthpiece, given Socrates’ reputation for irony and the dramatic nature of the dialogue form.

Aristotle attributes a different doctrine with respect to Forms to Plato and Socrates. Putting it in a nutshell, Aristotle merely suggests that Socrates’ idea of forms can be discovered through investigation of the natural world, unlike Plato’s Forms that exist beyond and outside the ordinary range of human understanding.

A variety of sources have given accounts of Plato’s death. One story, based on a mutilated manuscript, suggests Plato died in his bed, whilst a young Thracian girl played the flute to him. Another tradition suggests Plato died at a wedding feast. The account is based on Diogenes Laertius’s reference to an account by Hermippus, a third-century Alexandrian. According to Tertullian, Plato simply died in his sleep.