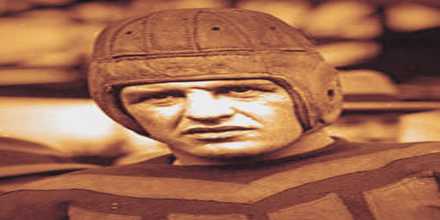 Red Grange, byname of Harold Edward Grange was born on June 13, 1903, in Forksville, Pennsylvania, U.S. He was an American collegiate and professional gridiron football player and broadcaster. He was an outstanding halfback whose spectacular long runs made him one of the most famous players of the 20th century. He was an important influence in popularizing professional football.

Harold Edward “Red” Grange, nicknamed “The Galloping Ghost” was a college and professional American football halfback for the University of Illinois, the Chicago Bears, and for the short-lived New York Yankees. His signing with the Bears helped legitimize the National Football League. He was a charter member of both the College and Pro Football Halls of Fame.

In college, Grange was a three-time consensus All-American, leading his team to a national championship in 1923. He was the only consensus All-American running back in 1924 who was not a member of the Four Horsemen. The same year, Grange became the first recipient of the Chicago Tribune Silver Football award denoting the Big Ten’s most valuable player. In 2008, he was named the best college football player of all time by ESPN, and in 2011, he was named the Greatest Big Ten Icon by the Big Ten Network.

He became a sportscaster after he retired in 1934.

At Wheaton High School, Grange earned 16 varsity letters in four sports (football, baseball, basketball, and track) during the four years he attended, notably scoring 75 touchdowns and 532 points for the football team. As a high school junior, Grange scored 36 touchdowns and led Wheaton High School to an undefeated season. In his senior year, his team won every game but one in which they lost 39–0 to Scott High School in Toledo, Ohio.

After graduation, Grange enrolled at the University of Illinois, where he was admitted to the Zeta Psi fraternity. He had initially planned to compete in only basketball and track, but changed his mind once he arrived and joined coach Bob Zuppke’s Fighting Illini football team. As a high school junior, Grange scored 36 touchdowns and led Wheaton High School to an undefeated season. In his senior year, his team won every game but one in which they lost 39–0 to Scott High School in Toledo, Ohio. Knocked out in this game, Grange remained unconscious for two days, having difficulty speaking when he awoke. In addition to his success in football, Grange was an all-state track and field runner. In 1920, Grange was a state champion in the high jump, while placing third and fourth in the 100-yard dash and the 220-yard dash, respectively. In 1921, he won the state title in both the long jump and the 100-yard dash, and finally in 1922, he placed third in the 100-yard dash and won the 220-yard dash. In his first collegiate football game, he scored three touchdowns against Nebraska. He once scored four touchdowns in twelve minutes. In seven games as a sophomore, he ran for 723 yards and scored 12 touchdowns, leading Illinois to an undefeated season and the Helms Athletic Foundation national championship.

Grange vaulted to national prominence as a result of his performance in the October 18, 1924 game against Michigan, in the grand opening game of the new Memorial Stadium, built as a memorial to Illini students and alumni who had served in World War 1.

Grange returned the opening kickoff for a 95-yard touchdown and scored three more touchdowns on runs of 67, 56, and 44 yards in the first 12 minutes–the last three in less than seven minutes. On his next carry, he ran 56 yards for yet another touchdown. Before the game was over, Grange ran back another kickoff for yet another touchdown. He scored six touchdowns in all. Illinois won the game by a lopsided score of 39 to 14. Michigan coach Fielding Yost said “All Grange can do is run.” To which the Illinois coach, Bob Zuppke, referring to a famed opera star of the age, responded, “And all Galli-Curci can do is sing.”

As a college senior in 1925, in a 24–2 upset of the University of Pennsylvania, Grange rushed for a career-high 237 yards through deep mud and scored three touchdowns. Laurence Stallings, a famed war correspondent who had co-written What Price Glory? was hired to cover the game for the New York World. After Grange accounted for 363 yards, Stallings said, “This story’s too big for me. I can’t write it.” Grange’s younger brother Garland followed his footsteps to also play football at Illinois.

On December 6, 1925, between 65,000 and 73,000 people showed up at the Polo Grounds to watch Grange, helping save the New York Giants’ franchise. Grange scored a touchdown on a 35-yard interception return in the Bears’ 19–7 victory. Offensively, he ran for 53 yards on 11 carries, caught a 23-yard pass, and completed two of three passes for 32 yards. In his first year, he accounted for at least 401 total yards and three touchdowns in his five official NFL games for the Bears.

Grange became involved in a dispute with the Bears and left to form his own league, the American Football League, to challenge the NFL. The league only lasted one season, after which Grange’s team, the New York Yankees, was assimilated into the NFL. In 1927, Grange suffered a serious knee injury against the Bears, which robbed him of some speed and his cutting ability. After sitting out 1928, Grange returned to the Bears, where he remained as a solid player through 1934.

In the 1933 championship, Grange made a touchdown-saving tackle that saved the game and the title for the Bears.

Grange retired from professional football in 1934, earning a living in a variety of jobs including motivational speaker and sports announcer. In the 1950s, he announced Chicago Bears games for CBS television and college football (including the Sugar Bowl) for NBC. To commemorate college football’s 100th anniversary in 1969, the Football Writers Association of America chose an all-time All-America team. Grange was the only unanimous choice. Then in 1999, he was ranked number 80 on The Sporting News list of the 100 Greatest Football Players.

In 1931, Grange visited Abington Senior High School in Abington, Pennsylvania, a suburb of Philadelphia. Shortly thereafter, the school adopted his nickname for the mascot in his honor, the Galloping Ghost.

On January 15, 1978, at Super Bowl XII, Grange became the first person other than the game referee to toss the coin at a Super Bowl. “Red” Grange was born on June 13, 1903, in Forksville, Pennsylvania, a village of about 200 people in an area of lumber camps. His father was the foreman of three lumber camps. His mother died when he was just five years old. For a number of years, the Grange family lived with relatives until they could finally afford a home of their own in Wheaton, Illinois.

When they arrived in Wheaton, Grange’s father worked hard and became the chief of police.

To help the family earn money, he took a part-time job as an ice toter for $37.50 per week, a job which helped him to build his core strength (and provided the source of one of his nicknames: “Ice Man” or “the Wheaton Ice Man”).

Chicago sportswriter Warren Brown nicknamed Grange “The Galloping Ghost”. When questioned in a 1974 interview, “Was it Grantland Rice who dubbed you the Galloping Ghost?”, Grange replied, “No, it was Warren Brown, who was a great writer with the Chicago’s American in those days.”

Grange married his wife Margaret, nicknamed Muggs, in 1941, and they were together until his death in 1991. She was a flight attendant, and they met on a plane. The couple had no children. He, however, has one surviving daughter – Rosemary Morrissey – born in 1928 from a previous relationship with Helen Flozack.

He was a very modest person, who insisted that even the ordinary plumber or electrician knows more about his craft than he does. He said he could not explain how he did what he did on the field of play, and that he just followed his instincts.

Grange died of complications from Parkinson’s Disease in Lake Wales on January 28, 1991 at the age of 87. (Statue of Red Grange outside Memorial Stadium in Champaign, Illinois)