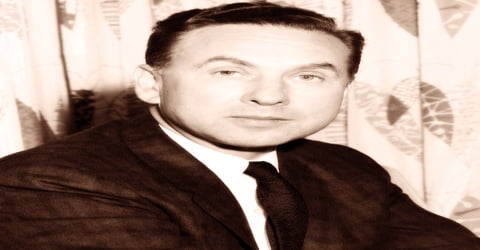 An American scientist who was a joint recipient of the Nobel Prize for Physics in 1961 for his investigations of protons and neutrons, which revealed the hitherto unknown structure of these particles, Robert Hofstadter was born into a Jewish family in New York City on February 5, 1915, to Polish immigrants, Louis Hofstadter, a salesman, and the former Henrietta Koenigsberg. He was the joint winner of the 1961 Nobel Prize in Physics (together with Rudolf Mössbauer) “for his pioneering studies of electron scattering in atomic nuclei and for his consequent discoveries concerning the structure of nucleons”.

Born into a Jewish family in New York, Hofstadter grew up to be a brilliant student who excelled in the sciences and mathematics. He graduated magna cum laude from the City College of New York and was awarded a Charles A. Coffin Foundation Fellowship to attend graduate school at Princeton University. Armed with a doctorate degree by the time he was 23, he served as a physicist at the National Bureau of Standards during World War II before embarking on an academic career. He worked for a while at the Princeton University where he carried out research on crystal conduction counters, on the Compton effect. After leaving Princeton, he moved to Stanford University where he focused his efforts on electron-scattering measurements. In the later stages of his career, he grew interested in astrophysics and played a major role in the development of the Compton Gamma Ray Observatory. An American nuclear physicist, Robert Hofstadter was born on February 5, 1915, in New York to Polish immigrants, Louis Hofstadter, a salesman, and his wife, Henrietta Koenigsberg. His family was Jewish.

Hofstadter attended elementary and high schools in New York City and entered City College of New York, graduating with a B.S. degree magna cum laude in 1935 at the age of 20, and was awarded the Kenyon Prize in Mathematics and Physics. He also received a Charles A. Coffin Foundation Fellowship from the General Electric Company, which enabled him to attend graduate school at Princeton University, where he earned his M.S. and Ph.D. degrees at the age of 23. Upon completing his doctorate degree by the age of 23, he was awarded a Procter Fellowship at Princeton University for postdoctoral work in 1938-39. During this time he began the study of photoconductivity in willemite crystals which laid the foundation for his future works.

In 1939, Hofstadter received the Harrison Fellowship at the University of Pennsylvania where he continued his postdoctoral work. There he met L. I. Schiff who became his friend for many years. It was at Pennsylvania that he helped to construct a large Van de Graaff machine for nuclear research.

In 1942 Robert Hofstadter married Nancy Givan (1920-2007), a native of Baltimore. They had three children: Laura, Molly who was disabled and not able to communicate, and Pulitzer Prize-winner Douglas Hofstadter. In 1948 Hofstadter filed a patent on this for the detection of ionizing radiation by this crystal. These detectors are widely used for gamma-ray detection to this day.

In 1950, Hofstadter left Princeton to join the Stanford University as Associate Professor of Physics. There he initiated research on electron-scattering and continued working on scintillation counters and developed new detectors for neutrons and X-rays. From 1953 onwards, he focused mainly on electron-scattering measurements. Working together with his students and colleagues, he studied the charge distribution in atomic nuclei and made the use of the linear electron accelerator to measure and explore the constituents of atomic nuclei.

His first experiments were on gold and polyethylene. Hofstadter quickly realized he needed an even bigger and more powerful magnet. Undeterred, Hofstadter designed a huge new 30-ton magnet, which was built for him by Bethlehem Steel. Along with a ten-ton shield, the magnet was mounted on a much bigger Navy anti-aircraft gun mount. Using his new device, Hofstadter was able to study nuclei of various materials in greater detail. Eventually, Hofstadter designed yet another double focusing spectrometer, weighing more than 200 tons.

Robert Hofstadter coined the term fermi, symbol fm, in honor of the Italian physicist Enrico Fermi (1901-1954), one of the founders of nuclear physics, in Hofstadter’s 1956 paper published in the Reviews of Modern Physics journal, “Electron Scattering and Nuclear Structure”. The term is widely used by nuclear and particle physicists. When Hofstadter was awarded the 1961 Nobel Prize in Physics, it subsequently appears in the text of his 1961 Nobel Lecture, “The electron-scattering method and its application to the structure of nuclei and nucleons” (December 11, 1961).

Hofstadter established a study group that designed the Stanford Linear Accelerator Center and the construction of a two-mile-long accelerator. In this period Hofstadter and his group at Stanford had almost a monopoly on doing research on nuclear structures because no places outside of Stanford had both the vision and the equipment to do so. It was a rare moment in modern science in which a small group of researchers could succeed in doing what later came to be called “big science.”

At Stanford Hofstadter used a linear electron accelerator to measure and explore the constituents of atomic nuclei. At the time, protons, neutrons, and electrons were all thought to be structureless particles; Hofstadter discovered that protons and neutrons have a definite size and form. He was able to determine the precise size of the proton and neutron and provide the first reasonably consistent picture of the structure of the atomic nucleus. Hofstadter found that both the proton and neutron have a central, positively charged core surrounded by a double cloud of pi-mesons. Both clouds are positively charged in the proton, but in the neutron the inner cloud is negatively charged, thus giving a net zero charge for the entire particle. Hofstadter was a Guggenheim Fellow in 1958-59, and spent one year at CERN in Geneva, Switzerland, on sabbatical leave. He retired from Stanford in 1985. During the final years of his life, he developed a deep interest in astrophysics and was instrumental in the design and development of the EGRET gamma-ray telescope of the Compton Gamma Ray Observatory.

Robert Hofstadter received a share of the Nobel Prize in Physics in 1961 “for his pioneering studies of electron scattering in atomic nuclei and for his thereby achieved discoveries concerning the structure of the nucleons.”

Hofstadter was honored with the National Medal of Science in 1986.

Robert Hofstadter died of a heart attack on November 17, 1990, in Stanford, California, at the age of 75.

Hofstadter is best remembered for his research in electron scattering in atomic nuclei. He not only discovered that protons and neutrons the fundamental constituents of the nuclei of atoms have a definite size and form but also determined that the precise size of the proton and neutron. He also provided the first “reasonably consistent” picture of the structure of the atomic nucleus.

Stanford University has an annual lecture series named after Hofstadter, the Robert Hofstadter Memorial Lectures, which consists of two lectures each year, one oriented toward the general public and the other oriented toward scientists.