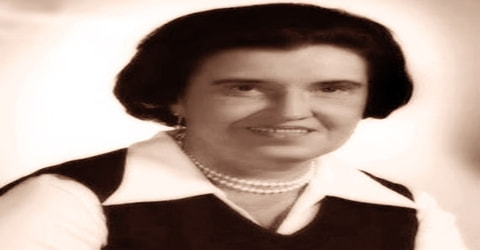 An American medical physicist and joint recipient (with Andrew V. Schally and Roger Guillemin) of the 1977 Nobel Prize for Physiology or Medicine, awarded for her development of radioimmunoassay (RIA technique), an extremely sensitive technique for measuring minute quantities of biologically active substances, Rosalyn Sussman Yalow was born on July 19, 1921, in the Bronx, New York, U.S. the daughter of Clara (née Zipper) and Simon Sussman, and was raised in a Jewish household. She was the second woman (the first being Gerty Cori), and the first American-born woman, to be awarded the Nobel Prize in physiology or medicine.

The technique (RIA technique) was used to measure various minute quantities of biological substances in the human blood and other aqueous fluids with the help of radioactive isotopes. The technique involves the use of two reagents of which the radioactive reagent bonds with the target substance while the antibody reagent reacts chemically with the target substance. Initially, this technique was used to measure the level of insulin in the blood but was later used to measure hundreds of other substances such as vitamins, hormones, enzymes and also drugs in the bloodstream which could be detected easily earlier. Yalow was helped by another physicist, Solomon A. Berson, in developing the RIA technique. She shared the prize money with two other scientists, Andrew Schally and Roger Guilleman as Solomon Berson was no longer alive when the announcement was made. She was also the first woman to achieve many more scientific feats during her career such as finding the underlying mechanism which caused type-II diabetes. Her radioimmunoassay technique is also used for testing the presence of the hepatitis virus in patients. Rosalyn S. Yalow, in full Rosalyn Sussman Yalow, was born in The Bronx, New York City, the U.S. on July 19, 1921. Her father, Simon Sussman, was a son of a Russian immigrant, and her mother, Clara Zipper was a German immigrant. She had an elder brother named Alexander. Not having any formal education, both her parents instilled the urge to read and write in their children by going to the public library as they did not have enough books.

Yalow went to Walton High School (Bronx), New York City. After high school, she attended the all-female, tuition-free Hunter College, where her mother hoped she would learn to become a teacher. Instead, Yalow decided to study physics. This college became a part of the ‘City University of New York’ later. Here she took up nuclear physics as her major subject. She persisted with her studies even though her parents wanted her to be a school teacher. She graduated from Hunter College in January 1941 with honors and joined a business school where she did not stay for long.

Since good graduate schools neither accepted female students for doctoral programs nor provided any financial help, Yalow planned to get a backdoor entrance into the graduate courses. With help from her earlier physics professor Dr. Jerrold Zacharias, she wanted to become a secretary and typist for Dr. Rudolf Schoenheimer at the ‘College of Physicians and Surgeon’ under the ‘Columbia University’. However, when she was offered a teaching assistantship in the department of physics of the ‘University of Illinois at Champaign-Urbana’ in February 1941, she immediately grabbed the opportunity and joined the most prestigious graduate school in June 1941.

A few years later, Yalow received an offer to be a teaching assistant in physics at the University of Illinois at Urbana-Champaign. She received this offer partially because World War II had just begun and many men went off to fight, and the University opted to offer women scholarship to avoid being shut down. At the University of Illinois at Urbana-Champaign, she was the only woman among the department’s 400 members and the first since 1917. Yalow earned her Ph.D. in 1945. The next summer, she took two tuition-free physics courses under government auspices at New York University. Rosalyn Sussman Yalow married Aaron Yalow in 1943 and had two children, a son named Benjamin and a daughter named Elanna. Yalow did not believe in “balancing her career with her home life” and instead incorporated her home life wherever she could in her work life. Yalow did, however, viewed the traditional roles of a homemaker as a priority, and devoted herself to traditional duties associated with motherhood and being a wife.

Throughout her career, she tended to shun feminist organizations, but still, Yalow advocated for including more women in science. While she believed the reason she had certain opportunities in Physics was because of the war, she thought that the reason that the number of women in this field decreased after the war due to a lack of interest. Yalow saw the feminist movement as a challenge to her traditional beliefs and thought that it encouraged women not to fulfill their duties to become mothers and wives. The month after graduating from Hunter College in January 1941, Rosalyn Sussman Yalow was offered a teaching assistantship in the physics department of the University of Illinois at Urbana-Champaign. Gaining acceptance to the physics graduate program in the College of Engineering at the University of Illinois was one of the many hurdles she had to overcome as a woman in her field. Powerful male figures controlled opportunities for training, recognition, promotion, and many aspects of development in the field of science, and especially physics. When Yalow entered the university in September 1941, she was the only woman in the faculty, which comprised 400 professors and teaching assistants. She was the first woman in more than two decades to attend or teach at this engineering college. Yalow credited her position at the prestigious graduate school to the shortage of male candidates during World War II. Being surrounded by gifted men made her aware of a wider world in science. They recognized her talent, they encouraged her, and they supported her. They were in a position to help her succeed.

After graduation, the Rosalyn Sussman Yalow moved to New York City, where they worked and eventually raised two children, Benjamin and Elanna. Yalow’s first job after graduate school was as an assistant electrical engineer at Federal Telecommunications Laboratory, a private research lab. Once again, she found herself the sole woman as there were no other female engineers at the lab. She started teaching physics at Hunter College from 1946 to 1950 to not only women but also veterans returning from the war.

In December 1947 Yalow was appointed as a part-time consultant of nuclear physics to the ‘Bronx Veterans Administration Hospital’. She served here as an assistant chief and physicist of the department dealing with radioisotopes. She retained her teaching post at Hunter College till the spring of 1950. At Hunter College, she started her research on the effects of radioisotopes on different diseases with the help of another American physicist named Solomon A. Berson.

In the 1950s it was known that individuals treated with injections of animal insulin developed resistance to the hormone and so required greater amounts of it to offset the effects of the disease; however, a satisfactory explanation for this phenomenon had not been put forth. Yalow and Berson theorized that the foreign insulin stimulated the production of antibodies, which became bound to the insulin and prevented the hormone from entering cells and carrying out its function of metabolizing glucose. In order to prove their hypothesis to a skeptical scientific community, the researcher’s combined techniques from immunology and radioisotope tracing to measure minute amounts of these antibodies, and the RIA was born. It was soon apparent that this method could be used to measure hundreds of other biologically active substances, such as viruses, drugs, and other proteins. This made possible such practical applications as the screening of blood in blood banks for the hepatitis virus and the determination of effective dosage levels of drugs and antibiotics.

In 1946, Yalow returned to Hunter College to teach physics and consequently influenced many women, most notably a young Mildred Dresselhaus: Yalow was responsible for steering the future “Queen of Carbon Science” away from primary school teaching and into a research career. She remained a physics lecturer from 1946 to 1950, although, by 1947, she began her long association with the Veterans Administration (VA) by becoming a consultant to the Bronx VA Hospital. The VA wanted to establish research programs to explore the medical uses of radioactive substances. Yalow was appointed the Chief of the laboratory which later came to be known as the ‘Nuclear Medical Service’ of the ‘Veterans Administration Hospital’. The technique developed by Yalow was soon being used to measure traces of other biological substances such as drugs, viruses, proteins, hormones, and other substances. The technique also helped in detecting the hepatitis virus and helped in deciding the effective dosages of antibiotics.

In 1976 Yalow was the first female recipient of the Albert Lasker Basic Medical Research Award. Yalow became a distinguished professor at large at the Albert Einstein College of Medicine at Yeshiva University in 1979 and left in 1985 to accept the position of Solomon A. Berson Distinguished Professor at Large at the Mount Sinai School of Medicine. She was awarded the National Medal of Science in 1988.

In 1972, Yalow was awarded the William S. Middleton Award for Excellence in Research. Also in 1972, she was given the Koch Award of the Endocrine Society.

Rosalyn Sussman Yalow was the first female scientist to be awarded the ‘Albert Lasker Basic Medical Research Award’ in 1976. Yalow received the Nobel Prize in Physiology or Medicine in 1977.

Yalow received the ‘National Medal of Science in 1988. In 1993, she was inducted into the National Women’s Hall of Fame.

The fact that Yalow was a trailblazer for women scientists was not lost on her. At a lecture before the Association of American Medical Colleges, as quoted in Lady Laureates, Yalow opined: “We cannot expect that in the foreseeable future women will achieve status in academic medicine in proportion to their numbers. But if we are to start working towards that goal we must believe in ourselves or no one else will believe in us; we must match our aspirations with the guts and determination to succeed; and for those of us who have had the good fortune to move upward, we must feel a personal responsibility to serve as role models and advisors to ease the path for those who come afterward.”

Yalow was awarded a Fulbright fellowship to Portugal, which is an American scholarship program of competitive, merit-based grants that sponsor participants for exchanges in all areas of endeavor, including the sciences, business, academe, public service, government, and the arts.