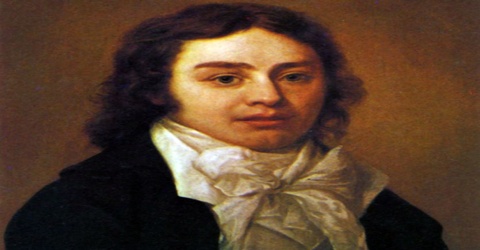 Notable works: The Rime of the Ancient Mariner, Kubla Khan Samuel Taylor Coleridge was born on 21 October 1772, in Ottery St Mary, Devon, England. He was a major poet of the English Romantic period, a literary movement characterized by imagination, passion, and the supernatural. He is also noted for his works on literature, religion, and the organization of society. He wrote the poems The Rime of the Ancient Mariner and Kubla Khan, as well as the major prose work Biographia Literaria. His critical work, especially on Shakespeare, was highly influential, and he helped introduce German idealist philosophy to English-speaking culture. Coleridge coined many familiar words and phrases, including suspension of disbelief. He was a major influence on Emerson and American transcendentalism.

Throughout his adult life Coleridge had crippling bouts of anxiety and depression; it has been speculated that he had bipolar disorder, which had not been defined during his lifetime. He was physically unhealthy, which may have stemmed from a bout of rheumatic fever and other childhood illnesses. He was treated for these conditions with laudanum, which fostered a lifelong opium addiction. Samuel Taylor Coleridge, the tenth and last child of the vicar of Ottery Saint Mary near Devonshire, England, was born on October 21, 1772. After his father’s death in 1782, he was sent to Christ’s Hospital for schooling. He had an amazing memory and an eagerness to learn. However, he described his next three years of school as, “depressed, moping, friendless.” In 1791 he entered Jesus College, Cambridge, England. Because of bad debts, Coleridge joined the 15th Light Dragoons, a British cavalry unit, in December 1793. After his discharge in April 1794, he returned to Jesus College, but he left in December without completing a degree. In 1792, he won the Browne Gold Medal for an ode that he wrote on the slave trade.

Throughout his life, Coleridge idealised his father as pious and innocent, while his relationship with his mother was more problematic. His childhood was characterised by attention seeking, which has been linked to his dependent personality as an adult. He was rarely allowed to return home during the school term, and this distance from his family at such a turbulent time proved emotionally damaging. He later wrote of his loneliness at school in the poem “Frost at Midnight”: “With unclosed lids, already had I dreamt/of my sweet birthplace.”

It was in Cambridge that he met poet and radical Robert Southey; the political opinions of Southey left an impression on Coleridge, who was interested in political thought throughout his life. Like many young students of his generation, he was initially inspired by ideals of French revolution, though he later became disenchanted. At one time, Coleridge and Southey planned to set up a utopian community in Bristol, but this plan never materialised. In 1795 he married Sara Fricker, but he never really loved her – marrying more out of social convention. After an unhappy marriage, they separated though they did have a daughter. After drifting away from his own wife, he later fell in love with Sara Hutchinson, the sister of Wordsworth’s future wife. In the late 1790s, Coleridge developed a close and important friendship with William Wordsworth – a fellow romantic poet. This was not just a close friendship, but also an important literary collaboration. Together they published the influential volume of poetry – Lyrical Ballards (1798). This included classics by Wordsworth, such as ‘Tintern Abbey’ and Coleridge’s ‘Rime of the Ancient Mariner’. These poems were a key development in Romantic poetry; using everyday words to evoke poetic ideals such as the beauty of nature. Coleridge definitely had a significant influence on Wordsworth; Wordsworth’s great work ‘The Prelude‘ was originally entitled ‘Poem To Coleridge.’

The most influential event in Coleridge’s career was his friendship with William Wordsworth (1770–1850) and his wife Dorothy from 1796 to 1810. This friendship brought a joint publication with Wordsworth of the Lyrical Ballads, a collection of twenty-three poems, in September 1798. The volume contained nineteen of Wordsworth’s poems and four of Coleridge’s. The most famous of these was “The Rime of the Ancient Mariner.” Coleridge later described the division of labor between the two poets: Wordsworth was “to give the charm of novelty to things of every day by awakening the mind’s attention from the lethargy of custom, and directing it to the loveliness and the wonders of the world before us,” while Coleridge’s “endeavours should be directed to persons and characters supernatural, or at least romantic.”

A second, enlarged edition of Coleridge’s Poems also appeared in 1798. It contained further lyrical and symbolic works, such as “This Lime-Tree Bower, My Prison” and “Fears in Solitude.” At this time Coleridge also wrote “Kubla Khan,” perhaps the most famous of his poems, and began the piece “Christabel.”

The years from 1795 to 1802 were for Coleridge a period of fast poetic and intellectual growth. His first major poem, “The Eolian Harp,” was published in 1796 in his Poems on Various Subjects. Its verse and theme contributed to the growth of English Romanticism, illustrating a blending of emotional expression and description with meditation.

From March to May 1796 Coleridge edited the Watchman, a periodical that failed after ten issues. While this failure made him realize that he was “not fit for public life,” his next poem, “Ode to the Departing Year,”

In 1800, he returned to England and shortly thereafter settled with his family and friends at Keswick in the Lake District of Cumberland to be near Grasmere, where Wordsworth had moved. Soon, however, he was beset by marital problems, nightmares, illnesses, increased opium dependency, tensions with Wordsworth, and a lack of confidence in his poetic powers, all of which fuelled the composition of Dejection: An Ode and an intensification of his philosophical studies. He also sprinkled cayenne pepper over his eggs, which he ate from a teacup. In 1802, Coleridge took a nine-day walking holiday in the fells of the Lake District. Coleridge is credited with the first recorded descent of Scafell to Mickledore via Broad Stand, although this was more due to his getting lost than a keenness for mountaineering.

In 1804, he travelled to Sicily and Malta, working for a time as Acting Public Secretary of Malta under the Civil Commissioner, Alexander Ball, a task he performed quite successfully. He lived in San Anton Palace in the village of Attard. From 1807 to 1808, Coleridge returned to Malta and then travelled in Sicily and Italy, in the hope that leaving Britain’s damp climate would improve his health and thus enable him to reduce his consumption of opium. Thomas de Quincey alleges in his Recollections of the Lakes and the Lake Poets that it was during this period that Coleridge became a full-blown opium addict, using the drug as a substitute for the lost vigour and creativity of his youth.

In 1809, Coleridge made his second attempt to become a newspaper publisher with the publication of the journal entitled The Friend. In August 1814, Coleridge was approached by Lord Byron’s publisher, John Murray, about the possibility of translating Goethe’s classic Faust (1808). Coleridge was regarded by many as the greatest living writer on the demonic and he accepted the commission, only to abandon work on it after six weeks. In Gillman’s home, Coleridge finished his major prose work, the Biographia Literaria (mostly drafted in 1815, and finished in 1817), a volume composed of 23 chapters of autobiographical notes and dissertations on various subjects, including some incisive literary theory and criticism. He composed a considerable amount of poetry, of variable quality. He published other writings while he was living at the Gillman homes, notably the Lay Sermons of 1816 and 1817, Sibylline Leaves (1817), Hush (1820), Aids to Reflection (1825), and On the Constitution of the Church and State (1830). He also produced essays published shortly after his death, such as Essay on Faith (1838) and Confessions Of An Inquiring Spirit (1840). A number of his followers were central to the Oxford Movement, and his religious writings profoundly shaped Anglicanism in the mid-nineteenth century. Coleridge spent the last eighteen years of his life at Highgate, near London, England, as a patient under the care of Dr. James Gillman. There he wrote several works which were to have tremendous influence on the future course of English thought in many fields: Biographia literaria (1817), Lay Sermons (1817), Aids to Reflection (1825), and The Constitution of Church and State (1829).

When Coleridge died on July 25, 1834, at Highgate, he left bulky manuscript notes that scholars of the mid-twentieth century found and began editing. When the material is eventually published, scholars and the general public will realize the extraordinary range and depth of Coleridge’s philosophical thoughts, and will understand his true impact on generations of poets and thinkers.