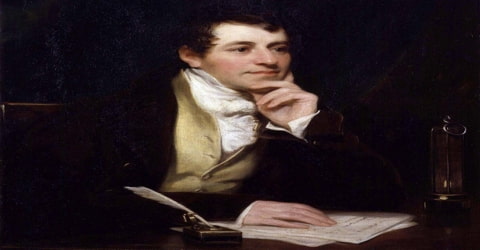 Sir Humphry Davy was an English chemist best known for his contributions to the discoveries of chlorine and iodine. He was born on December 17, 1778, at Penzance, Cornwall in the south-west of England, the elder son to middle-class parents who owned a small farm. He was naturally a gifted and sharp boy who attended a grammar school and could write impressive fiction and poetry.

Humphry Davy is best remembered today for isolating, using electricity, a series of elements for the first time: potassium and sodium in 1807 and calcium, strontium, barium, magnesium, and boron the following year, as well as discovering the elemental nature of chlorine and iodine. He also studied the forces involved in these separations, inventing the new field of electrochemistry. In 1799 Davy experimented with nitrous oxide and became astonished that it made him laugh, so he nicknamed it “laughing gas”, and wrote about its potential anesthetic properties in relieving pain during surgery.

Born to middle-class parents in Cornwall, England, Davy was an intelligent, curious and artistic-minded individual. He lost his father while he was just in his teens and was apprenticed to a famous surgeon with a large practice. As a young boy, he dreamed of becoming a poet and had composed several verses which displayed his artistic nature. However, after starting to work in the apothecary of the surgeon, he realized that he loved science more than poetry and abandoned the latter in favor of the former. He eventually became a chemist and attracted the attention of Gregory Watt and Davies Giddy. Impressed by the young man’s talents, Giddy gave him a well-equipped chemistry laboratory where Davy could perform his experiments. He was then appointed the chemical superintendent of the Pneumatic Institution and in this position, he studied the possible therapeutic uses of various gases and suggested the anesthetic use of nitrous oxide in human surgery. He was also an inventor who invented the Davy lamp, which allowed miners to work safely in close contact with flammable gases.

Berzelius called Davy’s 1806 Bakerian Lecture On Some Chemical Agencies of Electricity “one of the best memoirs which have ever enriched the theory of chemistry.” He was a Baronet, President of the Royal Society (PRS), Member of the Royal Irish Academy (MRIA), and Fellow of the Geological Society (FGS). He also invented the Davy lamp and a very early form of an incandescent light bulb. He joked that his assistant Michael Faraday was his greatest discovery. Sir Humphry Davy, 1st Baronet, was born on 17 December 1778 in Penzance in Cornwall, England, into a middle-class family. He was the eldest son and had four siblings. Davy’s brother, John Davy, writes that the society of their hometown was characterized by “an almost unbounded credulity respecting the supernatural and monstrous … Amongst the middle and higher classes, there was little taste for literature, and still less for science … Hunting, shooting, wrestling, cockfighting, generally ending in drunkenness, were what they most delighted in”.

He received his primary education from Penzance school and Truro Grammar School. His father, Robert, died in 1794 plunging the family into dire financial situation. Being the eldest son, Humphry was apprenticed to John Bingham Borlase, a surgeon with a large practice in Penzance.

He was well educated, but he was also naturally intelligent and curious, and those traits often manifested in the fiction and poetry he wrote at an early age. Davy was also deeply interested in nature, and he was an avid fisherman and collector of minerals and rocks.

Reflecting on his school days, in a letter to his mother, Davy wrote: “Learning naturally is a true pleasure; how unfortunate then it is that in most schools it is made a pain.” Davy said: “I consider it fortunate I was left much to myself as a child, and put upon no particular plan of study … What I am I made myself.” Davy’s brother praises his “native vigour”: “there belonged, however, to his mind, it cannot be doubted, the genuine quality of genius, or of that power of intellect which exalts its possessor above the crowd.”

After the tragic event of his father’s death, Gregory Watt, son of the famous Scottish inventor James Watt, came to visit him and subsequently became a lodger in the house of Mrs. Davy, his mother. They became great friends and their strong relationship had an important influence on the later career of Davy.

Mr. Davies Gilbert was a huge source of inspiration and encouragement for Davy, who later went on to introduce him to the Royal Institution in London.

Davy’s friends said: “This boy Humphry is incorrigible. He will blow us all into the air.” His elder sister complained of the ravages made on her dresses by corrosive substances. Davy was taught French by a refugee priest, and in 1797 read Lavoisier’s Traité élémentaire de Chimie: much of his future work can be seen as reacting against Lavoisier’s work and the dominance of French chemists.

Humphry Davy married a wealthy widow, Jane Apreece, in 1812. While Davy was generally acknowledged as being faithful to his wife, their relationship was stormy, and in later years he traveled to continental Europe alone. Humphry Davy became a talented chemist and his intelligence and skills impressed Gregory Watt and Davies Giddy (later Gilbert). They recommended him to Dr. Thomas Beddoes for the position of superintendent of the newly founded Pneumatic Institution in Bristol and he was appointed to the position in October 1798.

Within one year, Davy wrote his legendary publications “Essays on MAI and Light, with a New Theory of Respiration” and “Researches, Chemical, and Philosophical, chiefly concerning Nitrous Oxide and its Respiration”. Both of these works instantly gained worldwide recognition.

Davy was not only the first scientist to reveal the peculiar exhilarating or intoxicating properties of nitrous oxide gas, but his “Researches” also featured the results of various interesting experiments on the respiration of carbureted hydrogen, nitrogen, hydrogen, carbonic acid, and nitrous gases.

Davy’s personal charisma and charm made his scientific presentations to the public at the Royal Institution of Great Britain extremely popular among elite Londoners of the day. In fact, his admirers would line up for blocks to witness Davy’s chemistry lectures.

In 1800, the account of his experimental works was published as ‘Researches, Chemical and Philosophical’. The popularity of this publication established him as a reputed chemist and soon he was invited to lecture at the newly founded Royal Institution of Great Britain, in London.

In 1802, Humphry Davy had what was then, the most powerful electrical battery in the world at the Royal Institution. With it, Davy created the first incandescent light by passing an electric current through a thin strip of platinum, chosen because the metal had an extremely high melting point. It was neither sufficiently bright nor long-lasting enough to be of practical use but demonstrated the principle. By 1806 he was able to demonstrate a much more powerful form of electric lighting to the Royal Society in London. It was an early form of arc light which produced its illumination from an electric arc created between two charcoal rods. Davy gave his first lecture on the relatively new subject of ‘Galvanism’ on 25 April 1801. It garnered rave reviews and within a period of months, he became a very popular lecturer.

In 1806 English he discovered that chemical bonding was electrical in nature and that he could use electricity from his voltaic cells to split substances into their basic building blocks the chemical elements.

During his second Bakerian lecture at the Royal Society in 1807, he made public his tremendous achievement the decomposition by galvanism of the fixed alkalis and isolating the metals, potassium, and sodium for the first time. He performed a demonstration that these alkalis are simply metallic oxides. As a pioneer in the field of electrolysis, he used the voltaic pile to split common compounds and thus prepare many new elements. He was the first to isolate magnesium, boron, and barium. These discoveries are said to be the most important contribution made to the “Philosophical Transactions” (of the Royal Society) since Sir Isaac Newton.

Davy seriously injured himself in a laboratory accident with nitrogen trichloride. French chemist Pierre Louis Dulong had first prepared this compound in 1811 and had lost two fingers and an eye in two separate explosions with it. In a letter to John Children, on 16 November 1812, Davy wrote: “It must be used with great caution. It is not safe to experiment upon a globule larger than a pin’s head. I have been severely wounded by a piece scarcely bigger. My sight, however, I am informed, will not be injured”. Davy’s accident induced him to hire Michael Faraday as a co-worker, particularly for assistance with handwriting and record keeping. He had recovered from his injuries by April 1813.

In 1811 Davy concluded that chlorine was an element, naming it chlorine, from the Greek word ‘chloros,’ meaning pale green or yellow-green. Other important books of Davy include “Elements of Chemical Philosophy” (1812), “Elements of Agricultural Chemistry” (1813) and “Consolations in Travel” (1830).

He traveled to France in 1813 where he was asked by Gay-Lussac to investigate a mysterious substance isolated from sea-weed by Bernard Courtois. Davy worked in his hotel room and showed that the “mysterious substance” was an element, which is now called iodine.

Upon his return to England in 1815, Davy experimented with lamps for use in coal mines after being asked to design a safety lamp that would provide illumination without exploding in flammable atmospheres. After a series of experiments, he devised the miner’s safety lamp though he made no attempts to patent it. In 1815 Davy suggested that acids were substances that contained replaceable hydrogen ions;– hydrogen that could be partly or totally replaced by reactive metals which are placed above hydrogen in the reactivity series. When acids reacted with metals they formed salts and hydrogen gas. Bases were substances that reacted with acids to form salts and water. These definitions worked well for most of the nineteenth century.

As a poet, over one hundred and sixty manuscript poems were written by Davy, the majority of which are found in his personal notebooks. Most of his written poems were not published, and he chose instead to share a few of them with his friends. Eight of his known poems were published. His poems reflected his views on both his career and also his perception of certain aspects of human life. He wrote on human endeavors and aspects of life like death, metaphysics, geology, natural theology, and chemistry. Humphry Davy was knighted by the king in 1812 in recognition of his great scientific discoveries and was awarded a baronetcy in 1819.

In 1827, he won the Royal Society’s Royal Medal for his 1826 Bakerian lecture “On the Relation of Electrical and Chemical Changes”.

In his honor, The Royal Society of London has awarded the Davy Medal annually since 1877 “for an outstandingly important recent discovery in any branch of chemistry.” Sir Humphry Davy suffered from poor health during his later years. His body was considerably weakened by a series of strokes and he died in a hotel room in Geneva, Switzerland, on 29 May 1829, at the age of 50.

He had wished to be buried where he died but had also wanted the burial delayed in case he was only comatose. He refused to allow a post-mortem for similar reasons. But the laws of Geneva did not allow any delay and he was given a public funeral on the following Monday, in the Plainpalais Cemetery, outside the city walls.

Shortly after his funeral, his wife organized a memorial tablet for him in Westminster Abbey at a cost of £142.

In 1872, a statue of Davy was erected in front of the Market Building, Penzance, (now owned by Lloyds TSB) at the top of Market Jew Street, Penzance.