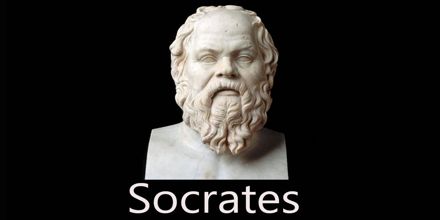 Cause of death: Sentenced to death by drinking a poison

Notable ideas: Socratic method, Socratic irony, I know that I know nothing

Socrates was a widely recognized and controversial figure in his native Athens, so much so that he was frequently mocked in the plays of comic dramatists. (The Clouds of Aristophanes, produced in 423, is the best-known example.) Although Socrates himself wrote nothing, he is depicted in conversation in compositions by a small circle of his admirers—Plato and Xenophon first among them.

We know of his life through the writings of his students, including Plato and Xenophon. His “Socratic method,” laid the groundwork for Western systems of logic and philosophy. When the political climate of Greece turned, Socrates was sentenced to death by hemlock poisoning in 399 BC. He accepted this judgment rather than fleeing into exile.

There isn’t much detail about the birth and life of Socrates. The only three sources of his much unknown life were the dialogues of Plato and Xenophon and the plays of his contemporary, Aristophanes. Socrates was born in 469 BC. His father,Sophroniscus was an Athenian stone mason and sculptor. His mother’s name was Phaenarete. His way of living is still unclear till this date. Many ancient texts state that he didn’t work. According to Xenophon’s Symposium, Socrates considered discussing philosophy as the only important occupation and art. While Aristophanes claimed that Socrates used to accept payment for his teachings and was running a school, Socrates’s disciples Plato and Xenophon denied the same. Some later sources said that Socrates took over the family profession of stonemasonry from his father and even crafted the statues of the Three Graces, which claimed to be standing near the Acropolis until the 2nd century AD.

Socrates was the son of Sophroniscus, an Athenian stone mason and sculptor, and Phaenarete, a midwife. Because he wasn’t from a noble family, he probably received a basic Greek education and learned his father’s craft at a young age. It is believed Socrates worked as mason for many years before he devoted his life to philosophy. Contemporaries differ in their account of how Socrates supported himself as a philosopher. Both Xenophon and Aristophanes state Socrates received payment for teaching, while Plato writes Socrates explicitly denied accepting payment, citing his poverty as proof.

Socrates married Xanthippe, a younger woman, who bore him three sons—Lamprocles, Sophroniscus and Menexenus. There is little known about her except for Xenophon’s characterization of Xanthippe as “undesirable.” He writes she was not happy with Socrates’s second profession and complained that he wasn’t supporting family as a philosopher. By his own words, Socrates had little to do with his sons’ upbringing and expressed far more interest in the intellectual development of Athens’ young boys.

Socrates believed that philosophy should achieve practical results for the greater well-being of society. He attempted to establish an ethical system based on human reason rather than theological doctrine. He pointed out that human choice was motivated by the desire for happiness. Ultimate wisdom comes from knowing oneself. The more a person knows, the greater his or her ability to reason and make choices that will bring true happiness. Socrates believed that this translated into politics with the best form of government being neither a tyranny nor a democracy. Instead, government worked best when ruled by individuals who had the greatest ability, knowledge, and virtue and possessed a complete understanding of themselves.

For Socrates, Athens was a classroom and he went about asking questions of the elite and common man alike, seeking to arrive at political and ethical truths. Socrates didn’t lecture about what he knew. In fact, he claimed to be ignorant because he had no ideas, but wise because he recognized his own ignorance. He asked questions of his fellow Athenians in a dialectic method (the Socratic Method) which compelled the audience to think through a problem to a logical conclusion. Sometimes the answer seemed so obvious, it made Socrates’s opponents look foolish. For this, he was admired by some and vilified by others.

There was a strong religious side to Socrates’s character and thought which constantly revealed itself in spite of his criticism of Greek myths. His words and actions in the Apology, Crito, Phaedo, and Symposium reveal a deep respect for Athenian religious customs and a sincere regard for divinity (gods). Indeed, it was a divine voice which Socrates claimed to hear within himself on important occasions in his life. It was not a voice which gave him positive instructions, but instead warned him when he was about to go off course. He recounts, in his defense before the Athenian court, the story of his friend Chaerephon, who was told by the Delphic Oracle (a person regarded as wise counsel) that Socrates was the wisest of men. That statement puzzled Socrates, he says, for no one was more aware of the extent of his own ignorance than he himself, but he determined to see the truth of the god’s words. After questioning those who had a reputation for wisdom and who considered themselves, wise, he concluded that he was wiser than they because he could recognize his ignorance while they, who were equally ignorant, thought themselves wise.

Socrates was famous for his method of argumentation (a system or process used for arguing or debate) and his works often made as many enemies as admirers within Athens. An example comes from the Apology. Meletus had accused Socrates of corrupting the youth, or ruining the youth’s morality. Socrates begins by asking if Meletus considers the improvement of youth important. He replies that he does, whereupon Socrates asks who is capable of improving the young. The laws, says Meletus, and Socrates asks him to name a person who knows the laws. Meletus responds that the judges there present know the laws, whereupon Socrates asks if all who are present are able to instruct and improve youth or whether only a few can. Meletus replies that all of them are capable of such a task, which forces Meletus to confess that other groups of Athenians, such as the Senate and the Assembly, and indeed all Athenians are capable of instructing and improving the youth. All except Socrates, that is. Socrates then starts a similar set of questions regarding the instruction and improvement of horses and other animals. Is it true that all men are capable of training horses, or only those men with special qualifications and experience? Meletus, realizing the absurdity of his position, does not answer, but Socrates answers for him and says that if he does not care enough about the youth of Athens to have given adequate thought to who might instruct and improve them, he has no right to accuse Socrates of corrupting them.

Thus the Socratic method of argumentation begins with commonplace questions which lead the opponent to believe that the questioner is simple, but ends in a complete reversal. Thus his chief contributions lie not in the construction of an elaborate system but in clearing away the false common beliefs and in leading men to an awareness of their own ignorance, from which position they may begin to discover the truth. It was his unique combination of dialectical (having to do with using logic and reasoning in an argument or discussion) skill and magnetic attractiveness to the youth of Athens which gave his opponents their opportunity to bring him to trial in 399 B.C.E.

The jury was not swayed by Socrates’s defense and convicted him by a vote of 280 to 221. Possibly the defiant tone of his defense contributed to the verdict and he made things worse during the deliberation over his punishment. Athenian law allowed a convicted citizen to propose an alternative punishment to the one called for by the prosecution and the jury would decide. Instead of proposing he be exiled, Socrates suggested he be honored by the city for his contribution to their enlightenment and be paid for his services. The jury was not amused and sentenced him to death by drinking a mixture of poison hemlock.

Before Socrates’s execution, friends offered to bribe the guards and rescue him so he could flee into exile. He declined, stating he wasn’t afraid of death, felt he would be no better off if in exile and said he was still a loyal citizen of Athens, willing to abide by its laws, even the ones that condemned him to death. Plato described Socrates’s execution in his Phaedo dialogue: Socrates drank the hemlock mixture without hesitation. Numbness slowly crept into his body until it reached his heart. Shortly before his final breath, Socrates described his death as a release of the soul from the body.

One of the immediate effects of Socrates’ death was the setting up of new philosophical schools of thoughts by his students and followers. They also exercised their perceptions of his teachings in politics. His student Plato founded the “Academy” in 385 BC which later became so famous that it popularized the word “Academy” for educational institutions. Plato’s protégé, Aristotle was also a key figure in the Classical Era and founded his own school,the Lyceum in 335 BC. Aristotle was also the tutor of Alexander the Great. Socrates’ thoughts of stressing a simplistic way of living later led to the origination of Cynicism by one of his older students, Antisthenes. The contribution of Socrates in Western Philosophy became more evident in the Renaissance and the Age of Reason in Europe. A number of paintings and plays from this period depicted his role in the western intellectual process. His scientific method is still being used in classrooms and law school discourses.