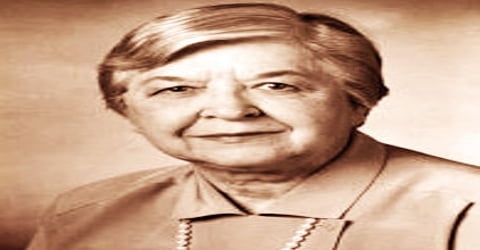 An American chemist, a pioneer in polymer research whose work yielded Kevlar, an ultrastrong and ultrathick material best known for its use in bulletproof vests, Stephanie Kwolek was born to Polish immigrant parents in the Pittsburgh suburb of New Kensington, Pennsylvania, the U.S. on 31st July 1923. She was an organic chemist, best known for inventing Kevlar in 1965. Kevlar is an immensely strong plastic, first used as a replacement for steel reinforcing strips in racing car tires, and now used in a large number of applications where high strength is required without high weight.

Kwolek research work led to the development of the synthetic fiber, Kevlar, a material of exceptional strength best known for its use in bulletproof vests. The material she created after years of tireless work in the laboratories is far stronger and lighter than steel and has been used in car tires, boots for firefighters, cut-resistant gloves, fiber-optic cables, fire-resistant mattresses, and armored limousines. Regarded a true pioneer for women in science, she became the fourth woman to be added to the National Inventors Hall of Fame in 1995. The daughter of a naturalist, she developed an early interest in science due to the influence of her father. Even though her father died when she was young, her love for science remained strong and she went on to earn a Bachelor of Science degree with a major in chemistry from Margaret Morrison Carnegie College of Carnegie Mellon University. She then found a job with DuPont’s New York facility and worked there for over 40 years over the course of which she made numerous contributions to research in polymer chemistry. During her career with the company, she invented Kevlar when her team was searching for a lightweight yet strong fiber to be used in tires. Her discovery proved very valuable for the company and generated several billion dollars of revenue for DuPont though she personally did not get any direct financial benefits. Stephanie Kwolek, in full Stephanie Louise Kwolek, was born on July 31, 1923, in New Kensington, Pennsylvania, United States, to Polish immigrant parents. Her father, John Kwolek, was a naturalist by avocation who took his daughter on numerous trips exploring the natural world. Her mother Nellie was a fashion-conscious woman. Her father died when she was just 10 years old. But the love for science she inherited from him would remain with her for life.

In 1946 Kwolek received a Bachelor of Science degree in chemistry from the Carnegie Institute of Technology (now Carnegie Mellon University), Pittsburgh, Pennsylvania. Intending eventually to go to medical school, she went to work as a laboratory chemist at the rayon department of the DuPont Company in Buffalo, New York.

Stephanie Kwolek never married, she dedicated her entire life to her profession.

She often tutored students in chemistry. She has also invented and wrote about numerous classroom demonstrations that are still used in schools today, such as the Nylon Rope Trick. Hale Charch, a future mentor, offered her a position at DuPont’s Buffalo, New York, facility. In the 1940s, a huge number of men were overseas because of World War II and employers were more open towards recruiting women. Stephanie Kwolek began her career at DuPont in 1946. Initially, she planned on working there only temporarily as she had plans to attend medical school. But with time she found the job very interesting and ditched her plans of becoming a doctor, choosing to continue with her current career path.

Kwolek only intended to work for DuPont temporarily, to raise money to study medicine. When she found the work interesting, she decided to stay and moved to Wilmington, Delaware, in 1950 with DuPont. She created Kevlar after ten years with the company. In 1959, she won a publication award from the American Chemical Society (ACS), the first of many awards. The paper, The Nylon Rope Trick, demonstrated a way of producing nylon in a beaker at room temperature. It is still a common classroom experiment, and the process was extended to high molecular weight polyamides. In 1985, Kwolek and coworkers patented a method for preparing PBO and PBT polymers.

Kwolek is best known for her work during the 1950s and ’60s with aramids, or “aromatic polyamides,” a type of polymer that can be made into strong, stiff, and flame-resistant fibres. Her laboratory work in aramids was conducted under the supervision of research fellow Paul W. Morgan, who calculated that the aramids would form stiff fibres owing to the presence of bulky benzene (or “aromatic”) rings in their molecular chains but that they would have to be prepared from solution because they melt only at very high temperatures. Kwolek determined the solvents and polymerization conditions suitable for producing poly-m-phenylene isophthalamide, a compound that DuPont released in 1961 as a flame-resistant fibre with the trade name Nomex. She then extended her work into polyp-benzamide and poly-p-phenylene terephthalamide, which she noted adopted highly regular rodlike molecular arrangements in solution. From these two “liquid crystal polymers” (the first ever prepared), fibers were spun that displayed unprecedented stiffness and tensile strength. Polyp-phenylene terephthalamide was released commercially in 1971 with the trade name Kevlar, a fiber that finds use in high-strength tirecord, reinforced boat hulls and other structural parts, and lightweight bulletproof vests.

While working for DuPont, Kwolek invented Kevlar. Today, Kevlar is used in a great number of different ways, including armor, gloves, tires, yacht sails, shoes, ropes, and tennis racquet strings. Kevlar is an example of a type of chemicals called polymers. Polymers are long molecules, which are made by joining smaller molecules together into a chain.

In 1964, in anticipation of a gasoline shortage, her group began searching for a lightweight yet strong fiber to be used in tires. The polymers she had been working with at the time, polyp-phenylene terephthalate and polybenzamide, formed liquid crystal while in the solution that at the time had to be melt-spun at over 200 °C (392 °F), which produced weaker and less stiff fibers. A unique technique in her new projects and the melt-condensation polymerization process was to reduce those temperatures to between 0 and 40 °C (32 and 104 °F). The raw Kevlar polymer is spun to produce very strong, stiff fibers. When this was first done, Kwolek was astonished when she discovered that weight-for-weight the polymer she had made was five times stronger than steel.

The fibers were tested in 1965 and were found to be five times as strong as steel of equal weight and resistant to fire. Her supervisor at DuPont recognized the commercial potential of the newly developed fiber and it was introduced in the market as Kevlar in the early 1970s. Kwolek, however, was not very involved in developing practical applications of Kevlar. She spent her entire career with DuPont and retired as a research associate in 1986. During her later years, she served on both the National Research Council and the National Academy of Sciences.

Kevlar is used as a material in more than 200 applications, including tennis rackets, skis, parachute lines, boats, airplanes, ropes, cables, and bullet-proof vests. It has been used for car tires, firefighter boots, hockey sticks, cut-resistant gloves, and armored cars. It has also been used for protective building materials like bomb-proof materials, hurricane safe rooms, and bridge reinforcements. During the week of Kwolek’s death, the one-millionth bullet-resistant vest made with Kevlar was sold. Kevlar is also used to build cellular telephones; Motorola’s Droid RAZR has a Kevlar unibody.

For her discovery of Kevlar, Kwolek was awarded the DuPont company’s Lavoisier Medal for outstanding technical achievement in 1995, as a “Persistent experimentalist and role model whose discovery of liquid crystalline polyamides led to Kevlar aramid fibers.” At the time of her death in 2014, she was still the only female employee to receive that honor.

In 1995, she was awarded the DuPont Company’s Lavoisier Medal for outstanding technical achievement as a “Persistent experimentalist and role model whose discovery of liquid crystalline polyamides led to Kevlar aramid fibers.”

Kwolek is best known for her work which led to the development of Kevlar, a para-aramid synthetic fiber, a highly versatile material that is used in more than 200 applications. The material which is even stronger than steel is used for the manufacture of bullet-proof vests, car tires, firefighter boots, hockey sticks, bicycle tires, and racing sails.