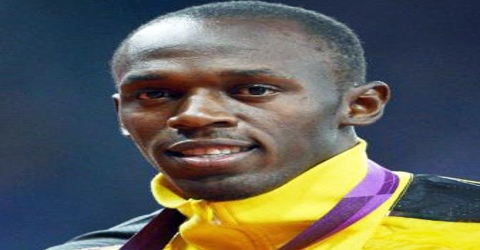 Usain Bolt, in full Usain St. Leo Bolt was born on August 21, 1986, in Montego Bay, Jamaica. He is a Jamaican sprinter who won gold medals in the 100-metre and 200-metre races in an unprecedented three straight Olympic Games and is widely considered the greatest sprinter of all time.

He ran the men’s 100-meter race in 9.63 seconds, a new Olympic record, making him the first man in history to set three world records in Olympic competition. He made history again at the 2016 Summer Games in Rio when he won gold in the 100-meter and 200-meter race and 4×100-meter relay, completing a “triple-triple,” earning three gold medals at three consecutive Olympics for a total of 9 gold medals over the course of his Olympic career. The 2008 Olympics was his international debut over 100 m; he had earlier won numerous 200 m medals, including 2007 World Championship silver and holds the world under-20 and world under-18 records for the event. Usain was born to Jennifer and Wellesley Bolt on 21st August 1986 in Jamaica. He was one of the three children born to the couple. His parents managed to make ends meeting by managing a shop where mostly grocery was sold. As a child, Bolt attended Waldensia Primary, where he first began to show his sprinting potential, running in the annual national primary-schools’ meeting for his parish. By the age of twelve, Bolt had become the school’s fastest runner over the 100 metres distance.

Upon his entry to William Knibb Memorial High School, Bolt continued to focus on other sports, but his cricket coach noticed Bolt’s speed on the pitch and urged him to try track and field events. Pablo McNeil, a former Olympic sprint athlete, and Dwayne Jarrett coached Bolt, encouraging him to focus his energy on improving his athletic abilities.

As early as age 14, Bolt was wowing fans of sprinting with his lightning speed, and he won his first high school championships medal in 2001, taking the silver in the 200-meter race.

At the age of 15, Bolt took his first shot at success on the world stage at the 2002 World Junior Championships in Kingston, Jamaica, where he won the 200-meter dash, making him the youngest world-junior gold medalist ever. Bolt’s feats impressed the athletics world, and he received the International Association of Athletics Foundation’s Rising Star Award that year and soon was given the apt nickname “Lightning Bolt.” One of Bolt’s favourite childhood memories are the days he spent playing Cricket and Football with his brother Sadiki.

Bolt revealed his humanitarian side to the world when he contributed US$50,000 to the victims of the 2008 Siachen earthquake. He is also a self-confessed football freak, who supports the famous club ‘Manchester United’ and is an ardent supporter of the footballer Ruud Van Nistelrooy.

Bolt was supposed to play the ‘Big Bash League’ and even communicated this thought to legendary Australian cricketer Shane Warne. However, he didn’t participate in this famous tournament.

He founded the Usain Bolt Foundation, to create opportunities through education and cultural development for children in Jamaica. The first major international sporting event which Bolt had participated in was the ‘IAAF World Youth Championship’, held in 2001 at the Hungarian city of Debrecen. Although he failed to emerge victorious in the 200m qualifier event, Bolt managed to finish the event in 21.73 seconds, which was his personal best at that time.

Usain then went on to participate in the ‘2002 World Junior Championships’. In this international event, held at Kingston, Jamaica, he managed to win the 200 metre event, by completing the race in just 20.61 seconds. He then made waves in the world of sports by his extraordinary performance in the ‘2003 CARIFTA Games’ event.

During the ‘Jamaican High School Championships’, which was also held in 2003, Bolt re-wrote the previous records of the 200m and 400m running events by completing both events in durations as small as 20.25 seconds and 45.35 seconds respectively.

Despite a nagging hamstring injury, Bolt was chosen for the Jamaican Olympic squad for the 2004 Athens Olympics. He was eliminated in the first round of the 200-meter, though, again hampered by injury. He reached the world Top 5 rankings in 2005 and 2006. Unfortunately, injuries continued to plague the sprinter, preventing him from completing a full professional season. In 2007, Bolt broke the national 200-meter record held for over 30 years by Donald Quarrie, and earned two silver medals at the World Championship in Osaka, Japan. These medals boosted Bolt’s desire to run, and he took a more serious stance toward his career.

Though many felt that Usain lacked sufficient experience to participate in the ‘Beijing Summer Olympics’, which was to be held in 2008, he silenced his critics by qualifying for the 100m final event. Bolt achieved path-breaking success when he won the 100m final, by completing the race in a mere 9.69 seconds and eventually became a world-renowned icon. He also won the 200m final with a new Olympic record of 19.30 seconds. He won his third gold medal at 2008 Olympics in 4x100m relay.

At the 2011 World Championships in Daegu, Bolt was eliminated from the 100m finals due to a false start. He came back strongly to win the gold medal in 200m with a timing of 19.40 seconds. He then partnered with his Jamaican team mates to set a world record time of 37.04 seconds in 4x100m relay. At the 2013 World Championships in Moscow, he once again emerged victorious in 100m and 200m, with a timing of 9.77 seconds and 19.66 seconds, respectively. He also won the gold medal in the 4×100 metres relay final and became the most successful athlete in the 30-year history of the world championships. At the 2014 Commonwealth Games, he was coming back from a hamstring injury and thus didn’t participate in 100m and 200m race. He participated in the 4x100m relay and helped his team win a gold.

In 2015, Bolt faced some challenges. He came in second at the Nassau IAAF World Relays in May, but secured an individual win in the 200-meter event at Ostrava Golden Spike event that same month. He also dominated the 200-meter race at the New York Addias Grand Prix that June. But trouble with his pelvic muscles led him to withdraw from two races. Bolt, however, made a comeback that July with a 100-meter win at London’s Anniversary Games. Still this elite runner is expected to face some stiff competition from American Justin Gatlin at the 2015 World Championships. Bolt returned to Olympic glory at the 2016 Summer Olympic Games when he won gold in the 100-meter race, making him the the first athlete to win three successive titles in the event. He finished the race in 9.81 seconds with American runner and rival Justin Gatlin, who took silver, 0.08 seconds behind him. The “fastest man alive” remained undefeated in what he said would be the last race of his Olympic career, the 4×100-meter relay which he ran with teammates Asafa Powell, Yohan Blake and Nickel Ashmeade. Anchoring the race, Bolt led the Jamaican team to win gold, crossing the finish line in 37.27. Japan won silver and Canada took the bronze. It was the third consecutive gold medal win for Bolt in Rio, and the completion of a “triple-triple” with a total of 9 gold medals earned over the course of his Olympic career. Bolt joins Paavo Nurmi of Finland (in 1920, 1924 and 1928) and Carl Lewis of the United States (in 1984, 1988, 1992 and 1996) who have won the most career gold medals at the Olympics. He was forced to withdraw from the 2015 Diamond League events in Paris, France, and Lausanne, Switzerland, because of a pelvic injury.

In March 2014 he underwent foot surgery. He recovered in time to run two relay legs at the 2014 Commonwealth Games in Glasgow, Scotland.

In early 2013 he suffered a hamstring strain.

In 2010 he was ruled out of competitive action for five weeks because of an injury to his left Achilles tendon. He returned for the Diamond League event in Lausanne, Switzerland, but an injury to his back ended his season in August 2010.

In April 2009 he was involved in a car accident near Kingston, Jamaica. He was treated for scratches and a minor foot injury after the car overturned and rolled into a ditch. He missed about a month of training and competition.

He missed the 2006 Commonwealth Games in Melbourne, VIC, Australia, because of a hamstring injury.

He was born with scoliosis a curvature of the lower spine. It went undetected until 2004 when the increased workload of his running schedule began to affect his hamstrings. He started to do exercises to manage the condition.