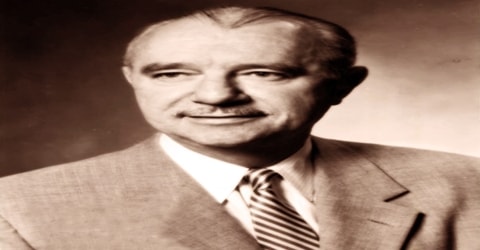 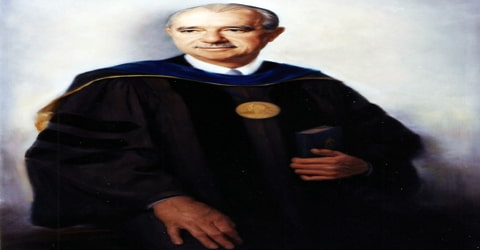 An American biochemist and winner of the Nobel Prize for Chemistry in 1955 for the isolation and synthesis of two pituitary hormones: vasopressin, and oxytocin, Vincent du Vigneaud was born on May 18, 1901, Chicago, Illinois, the U.S. While the former acts as a prime agent in effecting uterine contractions and lactation, the latter arouses blood pressure by contraction of arterioles and also stimulates water retention. The chemical structure of the two hormones was also analyzed by him and his team.

Du Vigneaud was the first in the field to synthesize a protein hormone that is oxytocin. He also achieved path-breaking success by synthesizing penicillin. His other scientific endeavors included identifying the chemical structure of the peptide hormone insulin and the sulfur-bearing biotin. Throughout his career, he held several significant positions. He remained Head of the Biochemistry Department of the George Washington University School of Medicine, Washington, D.C. He served the Cornell University Medical College, New York City for almost three decades and held positions of Professor and Head of the Department of Biochemistry. He also served ‘Cornell University’ in Ithaca, New York as a Professor of Chemistry. Apart from the ‘Nobel Prize’ he received several other awards and medals including ‘Albert Lasker Award for Basic Medical Research’ from the ‘American Public Health Association’ in 1948 and the ‘Passano Award’ from the ‘Passano Foundation’ in 1955.

Du Vigneaud also deciphered the chemical structure of biotin, one of the B vitamins, making synthesis possible. His work on vitamin and hormone synthesis presaged the now common and widespread use of such compounds. In addition to his work with oxytocin and biotin, du Vigneaud conducted important research into other compounds, including insulin and penicillin. 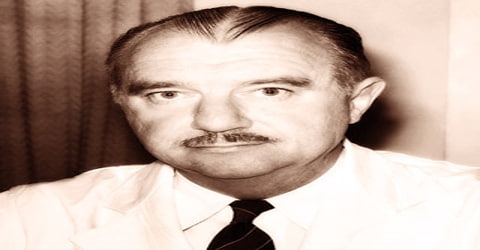 An American biochemist, Vincent du Vigneaud was born on May 18, 1901, in Chicago, Illinois, U.S. to Alfred J. du Vigneaud and his wife, Mary Theresa. His father was an inventor and a machine designer.

Du Vigneaud graduated from Schurz High School in 1918. He began studying chemistry at the University of Illinois at Urbana-Champaign. He was influenced by lectures of Carl Shipp Marvel. After receiving his M.S. in 1924 he joined DuPont. Sometime from 1924 to 1925, he remained a scholar at the ‘University of Pennsylvania’.

In 1925, Vigneaud enrolled at the ‘University of Rochester’ to pursue his postgraduate doctorate studies and began his work under the guidance of Professor John R. Murlin. He earned his Ph.D. in Biochemistry in 1927 submitting his thesis titled ‘The Sulfur in Insulin’ that showed cystine as the source of disulfide in the peptide hormone insulin. In 1927 he commenced his postdoctoral research on insulin along with distinguished American biochemist and pharmacologist John J. Abel at the ‘John Hopkins University’ in Baltimore. He demonstrated insulin as a protein, thus validating that proteins could be hormones.

During 1928 to 1929 Vigneaud visited Europe as a ‘National Research Council Fellow’ and joined the ‘Kaiser Wilhelm Institute for Leather Research’ in Dresden, Germany, where he continued with his postdoctoral studies along with Jewish-German biochemist Max Bergmann. Thereafter he remained a scholar at the ‘University College London’ and at the ‘University of Edinburgh’.

Vincent du Vigneaud married Zella Zon Ford on June 12, 1924, a chemistry teacher. Their son Vincent, Jr. was born in 1933 and daughter Marilyn Renee Brown was born in 1935. Both their children went on to become physicians. 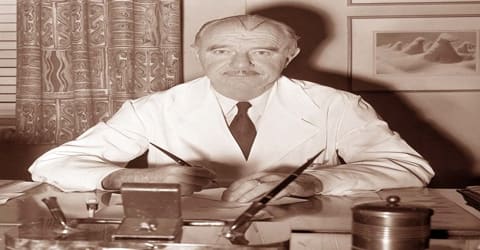 Vincent du Vigneaud returned to Illinois in 1929 and joined the ‘University of Illinois’ at Urbana-Champaign as a teacher of Physiological Chemistry, a position he held till 1932. While serving at the University, in 1930 he joined the professional fraternity ‘Alpha Chi Sigma’ (ΑΧΣ), which specializes in the field of chemistry. Thereafter he served the ‘George Washington University Medical School’ from 1932 to 1938 as a Professor of Biochemistry as well as the Chairman of the department. He then moved to New York City where he was appointed by ‘Cornell University Medical College’ as Professor and Head of the Biochemistry Department in 1938. He served the university for almost three decades until 1967.

Du Vigneaud and his staff at Cornell helped identify the chemical structure of the hormone insulin in the late 1930s, and in the early 1940s, they established the structure of the sulfur-bearing vitamin biotin. Later that decade, they isolated vasopressin and oxytocin and analyzed both those hormones’ chemical structure. Du Vigneaud found that the oxytocin molecule contains only eight different amino acids (nine amino acids in total, whereby a disulfide bond forms a link between two cysteines), in contrast to the hundreds of amino acids most other proteins contain.

In 1940 Vigneaud along with his collaborators discovered that coenzyme R and vitamin H are identical to the sulfur-bearing vitamin biotin, the structure of which was determined by them in 1941. During the 1940s he worked and became successful in isolating and analyzing the chemical structures of two of the neurohormones namely oxytocin and vasopressin that is considered to be associated with the posterior pituitary. Later in 1953, he achieved another success by becoming the first person to synthesize a protein hormone, oxytocin. In 1954 he was able to synthesize another hormone, vasopressin. Another path-breaking success was achieved by him and his collaborators in 1946 when they synthesized penicillin.

His career was characterized by an interest in sulfur, proteins, and especially, peptides. Even before his Nobel-Prize-winning work on elucidating and synthesizing oxytocin and vasopressin, he had established a reputation for work on insulin, biotin, transmethylation, and penicillin. Vigneaud also began a series of structure-activity relationships for oxytocin and vasopressin, perhaps the first for peptides. That work culminated in the publication of a book entitled, A Trail of Research in Sulphur Chemistry and Metabolism and Related Field.

In 1951 Du Vigneaud became the President of the ‘American Society for Biochemistry and Molecular Biology’. He authored a book on oxytocin and vasopressin titled ‘A Trail of Research in Sulphur Chemistry and Metabolism and Related Field’, which was published by the ‘Cornell University Press’ in 1952.

In 1953 Du Vigneaud was able to synthesize oxytocin, becoming the first to achieve the synthesis of a protein hormone. In 1946 du Vigneaud and his colleagues at Cornell achieved another breakthrough, the synthesis of penicillin. In 1955 Vigneaud was conferred honorary doctorates by the ‘New York University’ and the ‘Yale University’. Later in 1960, this honor was bestowed upon him by the ‘University of Illinois’. Post his retirement from ‘Cornell University Medical College’ he remained Professor of Chemistry at the ‘Cornell University’ in Ithaca, New York from 1967 to 1975.

Vincent du Vigneaud won the 1955 Nobel Prize in Chemistry “for his work on biochemically important sulphur compounds, especially for the first synthesis of a polypeptide hormone,” a reference to his work on the cyclic peptide oxytocin.

Du Vigneaud remained a member of several Societies including the ‘American Philosophical Society’ (1944) and the ‘National Academy of Sciences’ (1944). He also served as a Foreign Member of the ‘Royal Society of Sciences in Uppsala’ (1950), the ‘Royal Society of Edinburgh’ (1955) and the ‘Royal Institution of Great Britain’ (1959). Vigneaud also served as a member of the Board of Trustees of the ‘National Institute of Arthritis and Metabolic Diseases’ and the ‘Rockefeller Institute’.